I noticed my barrel and chamber were slightly creeping apart from each other by a small fraction of an inch after each shooting session, and I wondered why. I thought the recoil from 12oz soda cans were moving the chamber back, so I put a bolt through the supporting rod and if the chamber was moving back, it won't any more.
However, I noticed as the golf balls baked in the hot sun, some of them wouldn't fit in the barrel anymore. They had thermally expanded in the sun. So naturally I just SHOVED the ones in there that sort of fit and of course the pressure rammed them through. There were some big white streaks in the barrel which showed that they fit so tight, the plastic was actually fouling the barrel. So I think perhaps shooting hard plastic projectiles that don't fit in the barrel might not be a great idea unless the barrel is secured to the chamber with a threaded coupling.
My solution: hone the barrel ID to make them fit. I've done this before years ago and I did it again and I heated some golf balls in hot water to test, and even after many hours of laborious honing, there are still some that won't go through after soaking in hot water, but most of them do, so that's good enough. I'll load the golf balls from the front end and let them roll down. Where they stop is where they stop, but most will fit fine now. I could hone some more but screw that.
Anyway, I thought I'd share my solution in case you need to hone a barrel ID. I used a threaded rod with two nuts and two large washers. I wrapped duct tape around the end of the rod and then taped sand paper on it. I used the nuts and washers to sandwich it all together firmly. As the barrel ID gets slightly larger, add an additional layer of tape to increase the diameter then put more sand paper on it.
Cut a strip of sand paper that's the same width as the duct tape and secure one end of the sand paper with a piece of duct tape, then wrap the sand paper strip around the duct tape until it wraps around at least one full wrap (make sure to wrap in the right direction so it doesn't unwind itself during honing). Use a hand drill to rotate the rod and start honing. Make sure to grind down a little flat spot on the rod so it doesn't rotate in the drill chuck. I used a 5/16-18 threaded rod and just rubbed the end on the cement floor to flatten it. It actually works really well. Not sure it would work with a PVC barrel though.
The blue tape at the bottom is a stopping point for the length of the barrel. 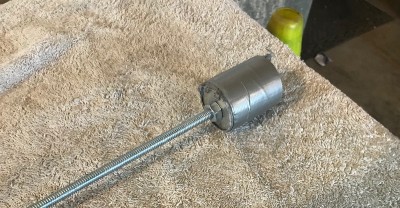 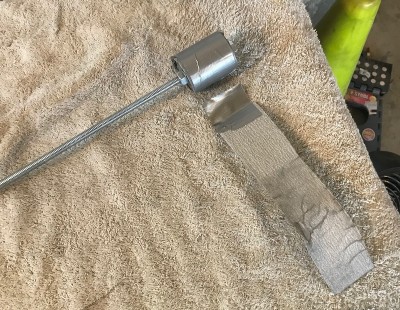 A lot of times pipe (read: barrels) isn't particularly round. Thus, tight projectiles can be tight as much because the barrel isn't round as because it's too small. Clamps on the outside of the barrel to keep the barrel round can work wonders.
Simulation geek (GGDT / HGDT) and designer of Vera.
Top

I had to polish out the end of my .177/4.5mm ID barrel to let the pellet seat nicely, had to use a M4 bolt with the head cut off and a slit in one end to hook in a small piece of emery tape.
Top
Post Reply
3 posts • Page 1 of 1