Nothing big this time. Just a "Digitally remastered" version of this earlier WIP from the top of the last page.

I haven't had a lot of time for my own art projects - any of you who've been reading my artist's comments on dA may be aware I volunteered to do some work for a website which produces fan material for the tabletop game that started this thread in the first place (with the little models).
Now that's taken a hell of lot of work, but it's getting fairly close to done...
Does that thing kinda look like a big cat to you?
Top

I have a hunch that you could do much better with the detail of the mechanical bits. He's some (obviously warhammer influenced) character work I had done back in 1998, don't know if I posted it before: 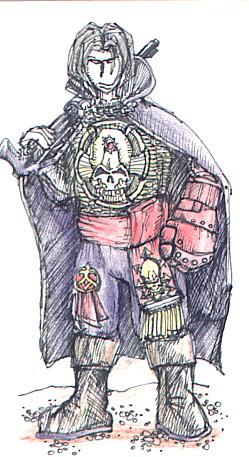 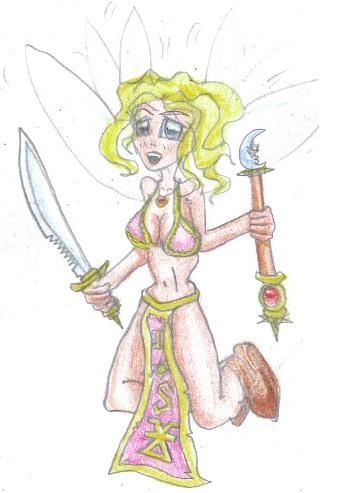 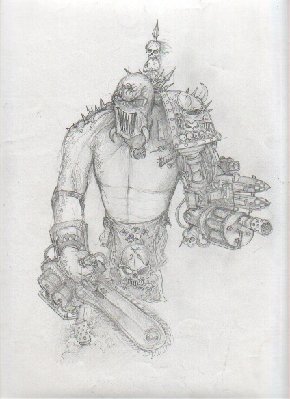 jackssmirkingrevenge wrote:I have a hunch that you could do much better with the detail of the mechanical bits.

Easily, if I want to. I'm going frakking nuts for the Dark Magenta cover. That includes a tech-priest with tubes down his nose from the wrong direction. Don't try and work that one out.

However, with Silva, character design changes are more complex.
Firstly, I'm trying to keep some faithfulness to the original design. Basically, I want to try and keep wherever I take her design as recognisably (if not necessarily immediately so) the same character as I started with in July 2006.

Problem there is she was literally the second character I created after I took up art as a hobby, so her design was somewhat limited by my artistic vision and talents at the time.
Given she's gone from mid twenties, long hair and reasonably feminine build (by the standards of my drawing at the time) to forty, a bobcut and feasibly being able to overturn a medium sized pink elephant, about the only things that remain are the configuration (left arm, right leg) and patterning on her bionics.

So, while if I were designing the character from scratch now, I'd probably go pretty different on the bionics, there are things I don't want to lose in the evolution of the design.
I may look into a more intricate design for the bionics if I think I can keep the basic patterning in there somehow (and having just thought about it, I do have an idea or two), but...

... the second thing is I don't want to go too overcomplicated with the design of one of my main characters. I agree, there's room for more complexity, but definitely don't want to make drawing her feel like effort.
She became my preferred character because she was fun to draw and distinctive enough in design to be recognisable between drawings, so those are two things I absolutely refuse to lose from her design.

Yep, I think I can do better and I'd like to... but I've still got to be a bit picky about what I do with her character design.
Aside from anything else, it's in her contract. Along with the fact she has to dress up like an idiot for my birthday, but she's less happy about that part.
Does that thing kinda look like a big cat to you?
Top

A short snippet of my literary wit.
Does that thing kinda look like a big cat to you?
Top

jackssmirkingrevenge wrote:I have a hunch that you could do much better with the detail of the mechanical bits. He's some (obviously warhammer influenced) character work I had done back in 1998, don't know if I posted it before:

Is that an eclipse launcher on warpig

Even mroe disturbing is the amount of time and resources some people are willing to apply to the matter if they see there's money to be made from it, when the end users are ultimately quite happy to take a swig of water from the toilet bowl.

A classic example of a brilliant simple design. A placemat that suctions itself to the dog bowl so nothing will ever spill, and the dog bowl will never get moved across the kitchen. The molded shape creates a suction keeping it from slipping while lifting the bowl high enough for doggie to eat.

That was made in 1996, so the inspiration was more likely the Milkor MGL

My bowls are all labeled "Human".

So I guess I'm not crazy.

And something that arrived yesterday!

New graphics tablet. My old tablet was fun, but it was a cheap piece of tat that drew a wonky line as often as it drew the right one. This, on the other hand, is about as good as you can get short of actually forking out for a large Wacom or something with a screen actually built into it - and the difference is astounding.
Does that thing kinda look like a big cat to you?
Top

Test run of new tablet: WIP of one of the other characters in our RP.
Does that thing kinda look like a big cat to you?
Top

awesome. My cousin had one of those tablets, I got to play around with it a bit. they are awesome.

how much did that run you? If you don't mind me asking.
"Some say his pet elephant is pink, and that he has no understanding of "PG rated forum". All we know is, he's called JSR. "
Top

JDP12 wrote:How much did that run you? If you don't mind me asking.

£90. I did see them* for about £75 a few months ago, but the tax rate went up at the start of the year, so that was unlikely to be repeated.

Of course, Amazon sells them all at different prices.

So as this was the cheapest in the here and now, could be delivered sooner and came bundled with Photoshop Elements 6 (which I already have, but I'm not saying no to a spare copy), it was the sensible choice.
Does that thing kinda look like a big cat to you?
Top

Looking good, and congrats on the new tablet. I have a (tiny) wacom and it's completely accurate. I know how frustrating the bad ones can be though.

You could probably scale up the figures right hand to force the perspective. It would definitely help give it some depth without even bothering with value or color. In fact, it is generally good practice to exaggerate the size of the hands and/or feet depending on the composition.

This is what I get for being an art student

so many muchness
Top

Hmm. Haven't updated this in a while. My skill level might have changed a little... This next one's going to need a little adjustment, as it's a bit sloppy...

(.177" pellet for scale - this is about half the scale of most of what I've posted previously). And, just so you don't get the idea my art is only of women, have a rather buff man I haven't finished giving his armour: Does that thing kinda look like a big cat to you?
Top

Don't know where you find time to do this but it looks great. :wav:
Look if you must.
Top

Impressive! You're definitely getting better at this