Will LED flicker on AC power source? After a quick look around I found that I can easily and cheaply get a big LED light (basically a large panel of LEDs) that already has a build-in setup to run on AC house power

The LED setup work, does not flick. Haven´t needed it through.
[youtube][/youtube]

btw, didn't you have a BBMG? *wink wink*

.
I was gonna shot can with my bbmg, but didn't feel like clean the mess up after, but it's on my to do list

Been looking at analytics, the 4th highest number of hits by country for this video is from Syria... methinks the rebels are doing their research!

also, just to kick this thread up a bit, painfully slow motion footage of a Tomahawk cruise missile impact test:

Have seen a pick recently in the news about syria when one soldier painted his diy luncher!

I bet it would be a pneumatic!

I need to find the pic:P
Top

Some awesome LOSAT test firings, you might want to mute it though as the LAZOR sound effects get a bit tedious. 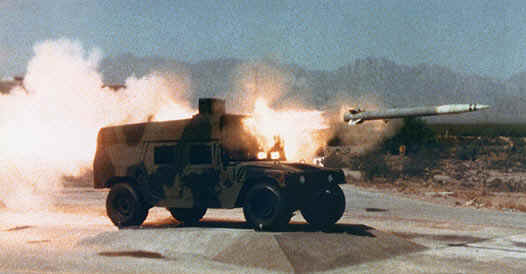 The specifications are impressive.


The missile accelerates to 5000 feet per second, flies to maximum range in less than four seconds and delivers five times the kinetic energy of current tank rounds. The fire control system allows the gunner/commander to acquire and auto-track up to three targets. Once a launch consent is issued, the system automatically initializes and guides the missiles to the targets in a sequential manner. Range of the LOSAT missile is about 5 km.

The Kinetic Energy Missile weighs 174 pounds, is 113 inches long and 6.4 inches in diameter. The current system provides for a three-man crew, but a crew of two can also conduct engagements. With a missile speed of 5,000 feet per second, it reaches maximum range in less than five seconds. The LOSAT missile is a hit-to-kill missile with no explosive warhead. It carries a long-rod penetrator and destroys the target through the application of brute force.

That's the equivalent to being hit by 22 shells from the legendary 88mm Panzerabwehrkanone 43 at the same time.

Who needs an explosive payload?

Seriously though its guidance system must respond very fast

EDIT
They aren't very specific when it comes to its guidance system - it seems it's SACLOS but how is communication between launcher and missile established ?
Children are the future

POLAND_SPUD wrote:They aren't very specific when it comes to its guidance system - it seems it's SACLOS but how is communication between launcher and missile established ?

Its spiritual successor, the gun launchedMRM-KE, uses both laser and on-board guidance.

There interesting thing about rocket KE projectiles is that they have a minimum range. It's pretty much one of the reasons that the Gyrojet rocket projectiles flopped, at the muzzle you could stop them with a finger.

It occurred to me that I have almost no high-speed footage from my cannons. So I tried to make some.

Unfortunately, both dart projectiles I tried using decided to exploderise in the barrel and nothing really wanted to be properly on target, which made this the only half-decent shot of the day:

[youtube][/youtube].
(Comes with sound too - I recorded it separately and matched it up afterwards).

The projectile was a 20mm steel rod, massing about 230g (8 oz); a very heavy projectile for the calibre, so the velocity was only a hair over 65 m/s (~215 ft/s) despite the 25 bar pressure. Still, that's ~500 Joules/370 ft-lb - not that it really shows, most of it being wasted by deflecting off and making a large hole in the ground just outside of frame.

The more interesting part was probably at the other end, the consequence of firing a half pound projectile from a 11 pound launcher. Suffice to say that the recoil was a little lively, probably close on 50 joules (about in the region of a .375 H&H).

EDIT: Yay. Figured out how to embed videos so they work on the new software.
Does that thing kinda look like a big cat to you?
Top

Another video that I did about a week and a half back, but forgot to post.

HEAL, in her current configuration, weighs about 5 kilos (11 lbs) and is 126cm (49.5") long. However, that weight is all pretty well balanced around the grip, so HEAL can quite easily be held or fired similarly to a pistol.

This was a test of firing it one handed from the other day - I changed the footage to black and white because the colour sucked, but it does come with sound instead:

You can see the gas cutter* on the piloting QEV doing its job... and, if you look really closely, the vapour from the trigger valve, which makes it reasonably possible to work out the delay.

It's about three frames between the trigger exhaust to pilot exhaust and another three from there to muzzle exhaust - about 12.5 ms in each case. That's more of a delay than I expected from trigger to pilot (I'll have to look at why), but the timing from pilot to muzzle is as close to the expected value as measuring it to the nearest frame will allow.

*Okay, I admit it. It's a 15mm compression tee (minus olives/compression nuts) I screwed into the valve partly for aesthetics, partly to stop anything getting jammed in there. But it works - albeit not very well at reducing the volume next to the the shooter's head.
Does that thing kinda look like a big cat to you?
Top
Post Reply
726 posts