Right now I'm in the process of building a laser tripwire. I'm using KipKay's portable laser tripwire design (circuit diagram attached) with a few modifications. I replaced the buzzer with a positive and negative lead. I'm also using a 2N3904 transistor instead of a BT169 thyristor, so the circuit is tripped only while the beam is broken.

I want to use the tripwire to trigger an airsoft claymore or something like that by way of a 24v sprinkler solenoid. The problem I'm having is that I can get about 1.8v from the leads, but no useful current. I don't know much about electrical engineering, so I'm not sure how I can use this voltage to trigger a completely separate circuit for the solenoid. At first I thought I could use a relay, but that would require current. I also thought I could use some sort of op-amp circuit, but I'm not sure how I could keep the two "grounds" separate. Any help would be greatly appreciated. I already fried a transistor and an LED. 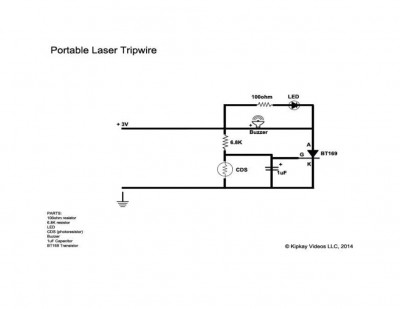 Just a quick thought off the top of my head but can't you use switching transistors to create alternating current then a step up transformer to get the 24v you're looking for??? The transformer would change it back to DC.
Look if you must.
Top

Try using a single channel relay board like this:

I've gotten them to reliably trigger off of a 3v logic line - there's a chance 1.8v will work - it's only got to activate the opto-isolator on the relay, which usually has a 1.5-1.7v threshold.

-- It looks like you could probably use the photo resistor to trigger the relay if you're creative and use the correct combination of pull-up/pull-down circuitry.
--In the recieving end box - you're going to want a 5V power source at least. so 4X AA or AAA batteries should suffice (vs. 2)
--After this you should be able to use the relay to trip any circuitry on the other side up to 500V and 10A. at least that's worked in my experience!

Look up circuits online for more information on how to use them.
Top

Simplest solution imo would be to replace that logic level thyristor ("transistor" in the diagram) with a sturdier SCR. Then you could simply increase the supply voltage to 24 VDC and modify the two resistor values (the LED isn't necessary and that entire branch can be removed if all you want it to trigger a solenoid valve).

Your phototransistor's nominal resistance ranges will determine what resistor and its power rating to use in lieu of the 6.8k one.
Top

I can't really get any more voltage for the circuit since I can only fit so many batteries in the project box I'm using. I also want to keep the LED so I can tell when the laser is aimed correctly when I'm setting it up (turn the receiver on, adjust the laser until the LED turns off, and then arm the claymore.) I'll try replacing the 6.8k Ohm resistor with a smaller one and replacing the 2N3904 transistor I'm using with a 2N2222 transistor that can handle more current.
Top

Microcontrollers. Ever heard of them ? Not to sound like a dick but seriously it's 2015 and arduinos are dirt cheap. Get one, experiment with it. You can then use it to program attiny chips and build really tiny circuits.
Children are the future

Ugh don't even get me started on Arduinos. I've tried more than once to understand how they work and how to use them, but I just can't manage to wrap my head around programming in general. Even if I could it wouldn't be worth it to me to get one and relegate it to a single simple project like this. The raw parts are cheaper anyway.
Top

I know but if you experiment with Arduinos you'll learn a lot about electronics along the way. These days the learning curve is really gentle and it has never been so easy. There are excelent video tutorials all over the internet and they are literally so clear that you could say that they are 'for dummies'.

Also why use a laser ? You could use a PIR / motion sensor:
http://en.wikipedia.org/wiki/Passive_infrared_sensor

You can get them really small and cheap.
Children are the future

The circuit as posted should have plenty of oomph to run a small relay, especially if you boost the voltage to 6V or so. If space is limited use a 9V battery.

If you do go with Poland's recommendation of a PIR sensor -


I've used about 20 of them on projects where I work, and they are super reliable with a 5V input. They can be adjusted for sensitivity (distance gain) and 'on-time' - or how long the circuit latches after it detects a moving IR source.
Top

Update: I'm back at school now so it looks like I'll have to put the project on hold. However now I have access to Multisim and I tweaked the design a bit. It looks like I'll be able to get a reasonable amount of power from this new setup.

Note the potentiometer is a stand-in for the photoresistor and the 1 Ohm resistors are just to simulate the resistances of a relay and a well-lit photoresistor. 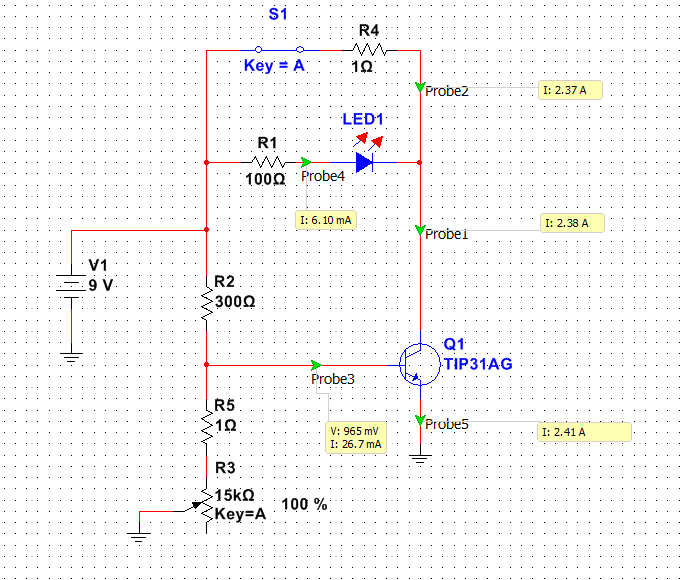 I think you'll want R2 to be bigger so it isn't wasting so much current doing nothing.

R1 also seems low. For a generic LED it is way too low but perhaps you are using a high intensity white LED? As drawn, when the LED is on it will be carrying 73mA (assuming a 1.7V red LED), and not the 6.1 mA shown on the schematic. A generic red LED will be fried by that much current.

ok, just wondering, but if i stuck a battery a motion detector(from a porch light), and a small motor to act as a trigger inline would it work as a motion sensing claymore/mockexplosive? i do not get a single word of what you guys are saying, sorry XD. im just wonding if that would be the same effective setup, other than the lazer set up, I dont think lazer is the way to go, because it would take to much set up in an airsoft game, I already pre-rig my airsoft claymore strings before each match.
when life gives you lemons... make root beer and leave the world wondering how you did that