by Juggernaut12121
Just finished my waste (motor) oil burner
It's basically just a nozzle with an oil line and an air line attached, the oil tank is pressurized to force the oil to the nozzle.
It seems to runs best when the tank pressure is set to 20 psi (regardless of how open the air line is). The pictures below show it running on something like 20 weight but I've got a lot of 50w oil with some sort of additive that makes it even thicker (I got the oil from some amateur racers). The 50w seems to be too thick so I mix it half and half with the 20 (I'm not really sure that the oil is actually mixing or if it separates once it sits for long enough), on top of that I have to run my air line at full bore. With all of the extra oxygen, the sludgy mixture seems to burn without any smoke and the flame actually has some purple flares at the base. 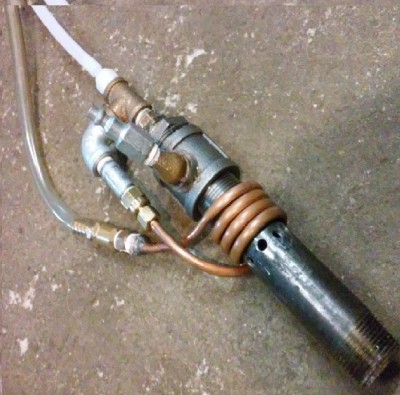 The polyethylene tubing is the air line, the vinyl is for the oil input, and the male quick connect was supposed to be for a propane inlet to warm up/start the burner on but I've kind of ditched it, now I just start a small wood fire under the burner to get it going. The copper winding around the base are for preheating the oil (not sure how well it actually works though). The holes were meant to provide more oxygen to the propane nozzle through a slight abusing of the venturi effect but they work pretty well at supplying extra air to the oil stream too. 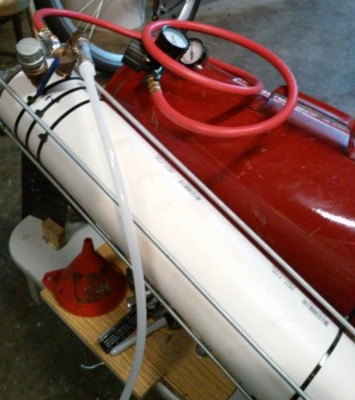 The picture's old but there's the air tank (red) and oil reservoir (PVC).

And, of course, testing the burner

by jackssmirkingrevenge
That is pretty fucking awesome.

Showing my age I guess but this was my reaction:

Waste oil burners are an on again/off again hobby of mine. Mostly with heating as the goal, but I'm always interested in what other folks are doing.

by mrfoo
Yeah, go for it. I am also interested.

by Juggernaut12121
Sorry about the crappy picture quality, but the point of the foundry itself was to be as cheap as possible (the only expense was the exhaust duct, $4 and not shown). It's made from a dirt mound that was once a fallen over tree. The side walls and roof are made of concrete blocks (horrible idea, I know) and a lot of dirt. 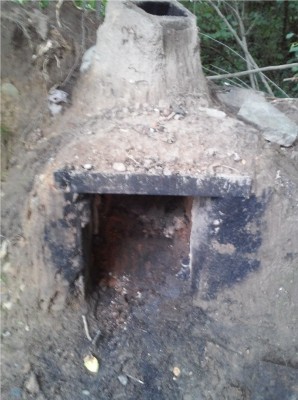 I close the front area off (except a hole for the burner) with more concrete blocks. Hopefully the picture shows that the side walls are padded with dirt for better insulation (although the roof is not). The floor is also dug out more so as to create a threshold at the opening; I'm using soup cans and other refuse for crucibles and if one burns through I want it to be contained in the foundry. The dirt inside slopes upward towards a whole in the back that leads off into an exhaust port (below) The duct is missing but I use a 4''x5' section of duct pipe as an exhaust (the port slopes forward because there are bushes and trees behind the stump that I don't want to accidentally catch on fire).

I realize it's kind of horrible and unsafe but it heats up very quickly and was insanely cheap (my smaller foundry had like a third of the capacity and was 15x more expensive). Plus, I don't have a screen to filter out the rocks from the dirt, so now I flinch whenever I hear a faint pop

Pictures of it in action to come on Monday

by Gippeto
Industries and countries have been built upon such simple devices...nothing wrong with simple IMO. Won't be as durable as refractory (obviously) but the replacement cost is well within reason.

You've a surplus of heat with that burner if only doing aluminum alloys...could just pile some bricks together. Adding the dirt insulates it all that much better.

by Juggernaut12121
The cast Monday was fairly large at ~8 pounds, although I made the mistake of not including vent holes for the gases so as I was pouring it formed some pretty aggressive bubbles (sadly, I didn't get to take pictures of the pour or mold). Starting the burner with a woodfire 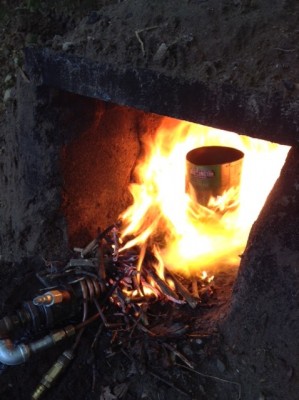 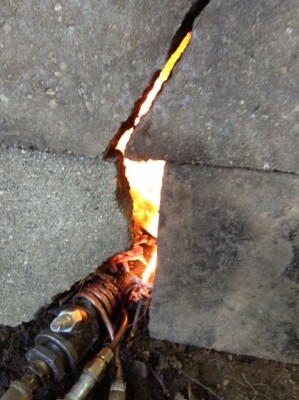 The concrete front doors with my peep hole 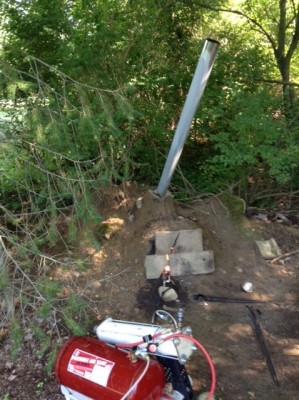 by Gippeto
You've got that working pretty darn good IMO..kudos.

Played with siphon burners (shop made and Delavan nozzles), modified babbington, turk and ozzirt burners for a while some years ago...are you filtering your used oil at all? Any trouble with the nozzle plugging up?

by Juggernaut12121
Thanks!
I'm pretty fond of siphon nozzles but I couldn't afford one, hence my rudimentary system

. I haven't been filtering any of the oil, although this last burn I guess there was a clog in the nozzle that blew the flame out near the end of the melt, but it re-lit itself after a few minutes. I figure one clog out of 4-6 hours of total run time isn't bad.

Will check my parts box...might have something for you. Will shoot you a pm if I find something worthwhile. Price will be pics of a successful burn/melt.

What kind of fuel burn rates are you getting?

Pic above was 2 liters every 15min on 50/50 diesel/used engine oil...friggin LOUD, but a lot smoother running with the flare at the inlet end.

by Juggernaut12121
I'm amazed and grateful for the offer, thanks!
As far as burn rates go it usually depends on the pressure that I set the tank to, the last time I melted I had it set to 10 PSI and the gallon of oil lasted over an hour (although I didn't actually think to time it, that and I don't have a hole cut in the top gasket of the tank yet, so I'm not sure how much is left). When I run at 20 PSI it usually burns through 4-5 quarts in just under an hour.

by Spud33
Nice one you have there

Would do a "Tim Taylor" quote here, but you're all likely too young to remember and grasp the humor lol.

Have been casting aluminum for a while now...very useful.

Oh don't give up on them just like that