In an ideal gas, the speed of sound would depend on the gas, and temperature.

However, air is not an ideal gas.

The increase in density at high pressures leads to increasingly prominent deviations from its behavior as an ideal gas.

At ~3000 PSI, such as in some of the PCP guns, this effect could account for the ~140 mph chrono reading above the speed of sound at atmospheric pressure and room temperature.
Top

Yeah, it must be something to do with the fact that the speed of sound in air DOES change somewhat with pressure. In an ideal gas, at least, this sort of effect would appear to be impossible. I'd love to do a course on fluid mechanics someday, it's fascinating.
I wonder how much deeper the ocean would be without sponges.
Right now I'm having amnesia and deja vu at the same time. I think I've forgotten this before.

I'd be interested in how much gas the vortex carries from the chamber with it.

Would be interesting if it could transport combustible gas from a pneumatic chamber to a target.

Massive losses on the way I'd expect but not of anything very expensive.

The military did try this

The project was canceled after a year, because there was just not enough progress to justify spending more on what was already a kindof silly project.

The problem is twofold:

The army was trying to dispense powdered agents with the gun they designed.

These powders are of course small particles, with a very finite mass (as opposed to a molecular gas). The vortex ring they created was about 3-4' in diameter, and moved at, lets say 150 mph.

The outer circumference of the vortex needs to have a rotational velocity of at at least the ring's forward velocity to remain stable, and lets say the "vortex" composing the ring had a diameter of ~10".

So the vortex (composing the ring) of circumference ~2.4 feet traveling at 220 fps would be rotating at ~5,040 RPM

At ~5,040 RPM at a 5" vortex radius, the particles towards the circumference of the vortex would be experiencing ~3,607 radial G's.

Obviously, having a significant mass compared to the molecules of gas composing the vortex, a powdered agent would not last long here.


The other problem, is that as the ring moves through the air, it "cycles" air through it.

Filling my vortex cannon with smoke from a smoke machine (which are small particles of a sort, as well), and firing it at even very low velocities (walking speed) all the smoke leaves the ring within ~30 feet.

I have thought of filling the tank with propane, and in short range it would work, but by about 10 yards it would all be left behind.
Top

Here is something interesting also (about electrically-charged vortex):
http://www.dailymail.co.uk/sciencetech/ ... remen.html

It uses little different type of "nozzle" for the vortex, you could try that design too for your cannon.. Actually I might try this even with my vortex cannon.

I have the papers of the military test from Army research laboratories, It includes the math equation to calculate the cone (barrel) size and pressures in different lengths inside the cone.
Top

I've actually been looking at those ARL papers for a while.

However, they are diffusing high-mach flow with their rig, I'm fairly certain my cannon doesn't create supersonic flow yet

Not to hijack your thread.. But Im going to do some new tests with my hybrid vortex cannon in the weekend and today i made some changes to the barrel/cone.. Im also going to measure the pressure at the end of the cone, to see if the calculations are working (for combustion things, not pneumatic)

My intention was simply to share what I've learned, as I had such a difficult time finding any projects like this, there must be others out there having the same trouble.

I'd love to give it a go too with experimental cone materials, but I think I need to make a 2" piston first

Never made a tee piston, let alone a 2" one. I might look into it within the next... month I guess...
Top

I would, in hindsight, have used a coaxial tank of a smaller volume...

I have, in hindsight, actually just built this!

Where I left off, I belive I was complaining about the shape of my cannon, the speed of the valve, and the size of the air tank.

And I've decided to upgrade to a 4" coaxial piston valve cannon design.

This will give a more uniform flow into the barrel from all directions, provide the smaller tank capacity, and the 1" increase in piston diameter will deliver 80% more force, hopefully opening the valve that much faster.

Here is the new piston assembley. You may notice I borrowed matti's idea, adding a conical diffuser to the barrel seal. This will hopefully help "untangle" airflow into the barrel, and subsequently the diffuser.

Here you can see the full assembley. I cut up a 4" male to 2" female coupling to use as a centering ring for the "barrel" tube. I also trimmed the edges of the vanes of the centering ring to airfoils, to help with smooth airflow. May be overkill, but it can't hurt.

This is a view down the barrel, at the diffuser on the end of the piston.

And finally, a finished cannon at the end of the night (2:00 AM)

Just have to work out a bumper for the piston, lube it up, and do a pressure test.

The diffuser may cause some performance trades. You covered the upside so I won't repeat it. On the other side are;

I considered a nose-cone on my QDV but rejected it for the above reasons.
Last edited by Technician1002 on Thu Jan 10, 2013 4:33 pm, edited 1 time in total.
My First QDV tested ABS DWV for compressed air - Competition QDV cannnons - The Mouse Musket
Top

I know, I may change the design to a more "aerospike" like design.
Top

Taking up dead space/turbulance is what a cone does if it has the right shape.
That means it actually increases flow. ( or rather, without it, flow is already restricted)

The front of the piston when fully open should curve from the inner walls of the 90 degree 'in"port to a sharp point in the center of the outport without sticking in, or falling short for that matter.

The outport should sit forward a tiny bit according to the same principle.

Look at the picture and think about it for a second.

This is what an optimised T-valve should look like: 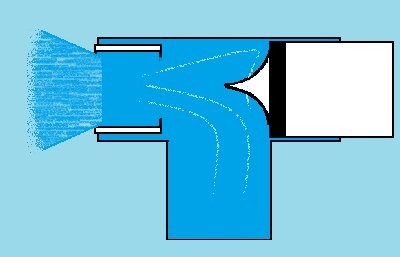 Gun Freak wrote:
Oh my friggin god stop being so awesome, that thing is pure kick ass. Most innovative and creative pneumatic that the files have ever come by!

That design works for a coaxial valve with air entering from all sides, but falls short with air entering from only one side. You would want to modify it for single side air flow if used in a T.
My First QDV tested ABS DWV for compressed air - Competition QDV cannnons - The Mouse Musket
Top
Post Reply
48 posts