it is made out of a bicycle, treadmill, satellite dish components, a sprinkler valve, and some PVC pipe. It was mostly junk i had laying around the shop.The air tank is made out of a satellite dish post i cut it to length and welded ends on it. i put a metal valve stem on one end and a 3/4 threaded female coupling on the other and an air Gage in the middle from there i put a 3/4 inch pipe nipple then a yard sprinkler valve or solenoid valve. then another 3/4 pipe nipple to a 3/4 to 1inch reducer. from there i made a 90 degree bend out of some tubing and welded the reducer to one end and the other end to a piece of 2 inch by12 inch pipe. from there i jb welded a 2 inch PVC sleeve onto it and then added the 2 inch PVC barrel. i used the aiming part of a satellite dish to mount it to the carriage it works good because it has the degrees stamped into it. I have about $50 in it and built it in about two days. It will fire a golf ball 400-500 yards at 160 psi on a 45 degree angle and put a hole through a industrial garage door at 30 yards. let me know what you guys think. 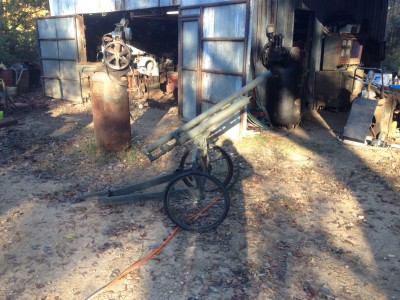 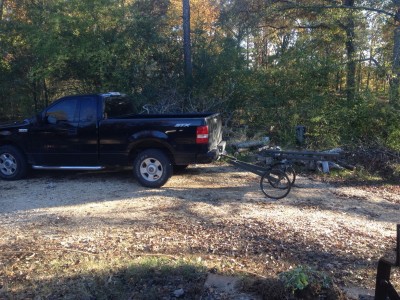 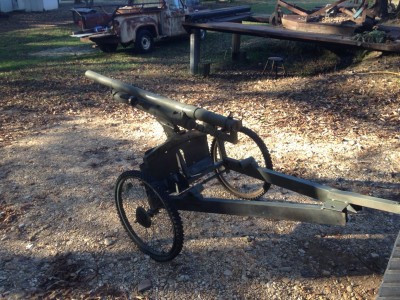 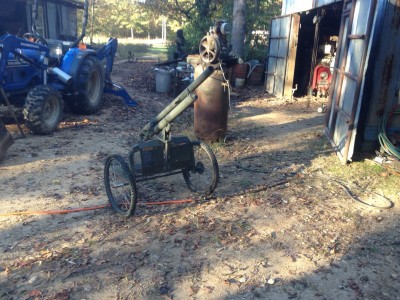 Nice work! Would love to see video/s of this in action.

i like that tractor you got there. what do you use it for ?
come undone
Top

bravootome wrote:i like that tractor you got there. what do you use it for ?

I prefer that lovely little truck in picture 3

Nice little artillery piece! The only thing I would change is using a larger sprinkler valve, 3/4" on a 2" barrel has very poor flow, and you might also want to consider modding your valve for manual instead of electronic actuation.

Other than that, fire in the hole!

The tractor is not mine it is a neighbors he uses it around his farm we are working on it.
the truck is just an old ford i use around the farm it still runs good but i have not had it on the highway in a few years.
and the 3/4 sprinkler valve is small but it was the only one i could find at the local hardware store. it has the option to fire electrically or manual it came that way. when i build another one i will go with a bigger sprinkler valve and do away with the 90 degree elbow to make it more efficient.
i am a machinist by trade and i am wondering how i would go about building an oxy acetylene cannon that would be safe? i have seen some people using black iron pipe but it just doesn't seem very safe. if anyone could point me in the right direction i would appreciate it

Read through the hybird section particularly any cannon using mixes X7 +. You can also find prior discussion on "oxy acetylene" in the combustion discussion section.
Look if you must.
Top

im building a slightly larger piece with a modded 1" valve and was curious how the recoil was and if a recoil system might be considered?

Also, even as a Welder Fabricator i still find Oxy fuel guns terrifying.... it can be done safely but its still really unsettling.

With the 3/4 valve it doesn't have any noticed recoil but you could make a track for your cannon to sit on and put bearings under it with a return spring with the right spring I think that would be a good recoil system.
Top

yeah... mines a little bigger... I test fired it without the carriage yesterday and go knocked on my ass. 2''pvc x3' chamber and 2''x6' barrel with a 1'' valve, same configuration with the breach too. luckily i work in a welding/fab shop and have access to a press brake and all sorts of cool stuff we all wish we had in our garage

It sounds like you are making a recoil shock. I think it would work well if you can find the right spring.
Top