Introduction and My First Pneumatic

Finally I have something ready to post! I have been lurking around here through the past year, and especially through the first six months. I am a 19 year old sophomore in college and was hired about the start of this year at the local home depot in the plumbing department. All the PVC fittings there reminded me of some cannons I'd seen online over the years, and so I got some devious ideas for a fun project to help me get to grips with all the plumbing fittings.

I eventually found myself here, and it was love at first sight looking at the pneumatic cannons here. Needless to say I got some devious ideas

. Before I show off my first project, I just want to say thanks to all of you users of the site, although I get a sense that the vast majority of those whom I learned a lot from on my way are gone from this forum never to come back, I must say I am grateful. I have learned more about plumbing fittings from here than I think I ever would have from the home depot training I received.

Ok now on to the gun. I wanted almost from the start something more reminiscent of a pistol than a cannon: small overall size and shooting bbs of some sort. I settled on airsoft bbs because it was easier for me to find cheap 6mm ID tubes than tubes suitable for a tight fit with pellets or .177 caliber bbs. My cannon uses two stainless steel 6mm ID x 250mm tubes as a barrel, connected to a QEV. My 'firing chamber' is a 1/4" npt x 6" nipple, and I use a suuuper cheap hella sketchy chinese HPA tank as an air source.

The only reg I could find for the size of threads this HPA tank outputs 850psi, which I know is def. pushing it for the valve, but I have not had any issues yet. I would definitely be interested in taking this pressure down lower though. I just can't really spare the money for an entire new proper branded tank with more typical threading for paintball atm with my broke college student budget. I have tried a second regulator, which screws onto the top of my existing one, but it leaked like hell and fell apart, so I have decided to go without it.

I definitely appreciate input of any kind, especially related to fixing the input pressure to be easier on the valve/switching valves to something more appropriate.

Heres the images. Did not realize there was an approval process, and the site does not seem to allow me to upload images. Here is an imgur album:
Top

Sounds good, would like to see it. I also favor airsoft as the ammo is cheap and I can get good results with only 150psi from my compressor. 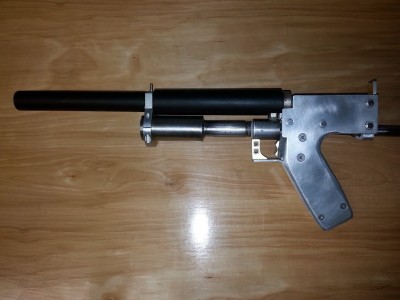 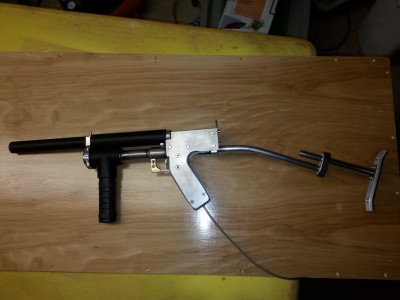 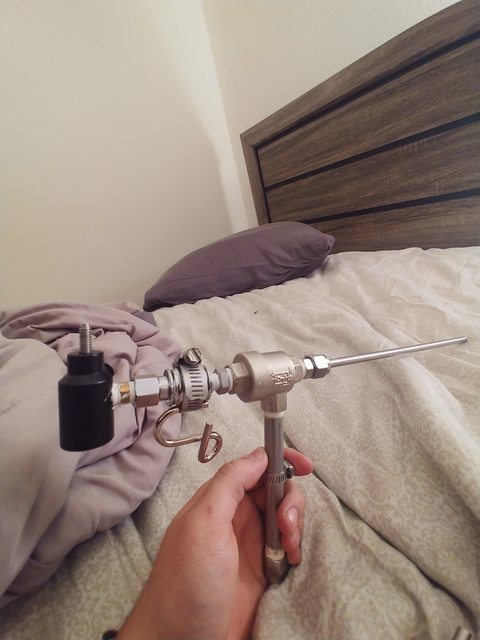 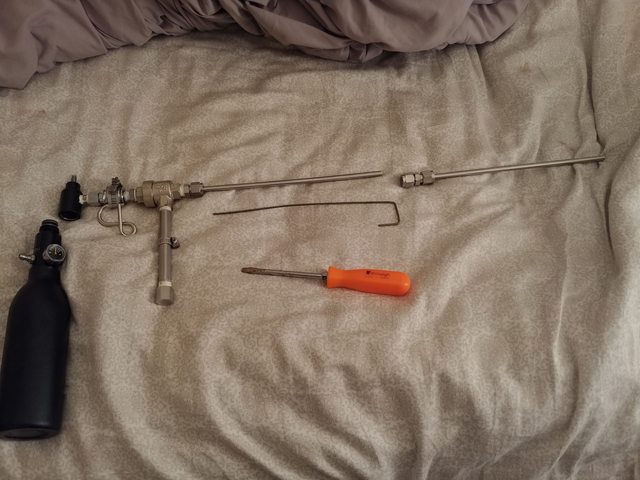 Great work for a first effort, kudos for jumping in the deep end with high pressure, that's where the power's at

I would have gone for a 3/8" barrel for some proper damage, in my book 0.177" is good for semi/full auto repeaters and not much else, but you're still going to be getting some good velocities out of that.

What are you using to stop the ammunition from rolling out before firing?


def. pushing it for the valve

To be honest I wouldn't be trusting it at 850 psi regularly, assuming the working pressure is 150 psi and the safety factor is 4x, that's still 600 psi.

Have you tried looking inside the bottle regulator to see if there's any shims you could remove in order to reduce the output pressure?
Last edited by jackssmirkingrevenge on Tue Nov 05, 2019 10:31 am, edited 1 time in total.

6mm airsoft bbs are a perfect fit. Good enough that static friction keeps the bb in place. Once rammed to the bottom of the barrel, bbs stay there.
Top

Can I simply remove the shims in order to reduce output pressure, or do they need to be replaced with anything? 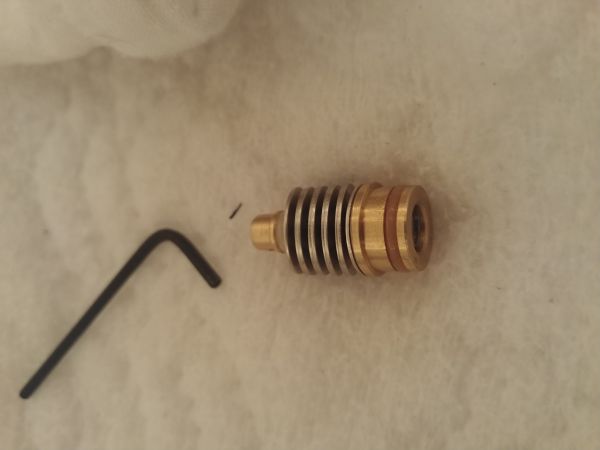 SloppyJoeES wrote:Can I simply remove the shims in order to reduce output pressure, or do they need to be replaced with anything?

Those are not shims but belleville washers, essentially that stack is the spring that opens the regulator against pressure.

Are there any flat washers in that stack? That would be a shim. If you remove any of the bellevilles I'm not sure the regulator would still work. You could try flipping the second one from left round.

Needless to say, high pressure is dangerous and any modifications should be carried out at your own risk, but that being said since you're removing and not adding, failure mode will likely simply be no regulator output pressure.

You could try flipping the second one from left round.

That wouldn't make any difference, apart from shortening the stack (and probably opening the regulator at all times), reducing travel, and adding a "progressive" element to it (not that the latter would be much, if any, use at all in this usage).

To reduce the force of the stack, it's easy. Create a new stack of the same length or slightly longer with only single washers opposing each other, remembering to make the ends "face out" . Like this:

That nets you half the spring force (and probably a bit more travel), and won't require more washers. It should probably be noted that this is almost certainly *not* what you want to achieve.

To make the force higher, and assuming travel is not an issue, triple up the washers. You'll need to make up the extra space with a, or several, spacers, as follows:

That would get you 1.5 times as much force. Quadrupling the opposing groups gets you twice as much. but correspondingly reduces the travel and will require more spacers to fit into the same space. Etc.

Bellevilles should be lightly lubricated, for HPA use I'd suggest a miniscule film of silicone grease.

As you note, HPA is dangerous, understand what you're doing and why, do it at your own risk, etc etc. If you're pissing about with the guts of a regulator, you need to understand exactly how it works, what you want to get from it, how that should happen mechanically, how you are going to do it, and how to mitigate the risk of what you are doing.
Top

hat wouldn't make any difference, apart from shortening the stack (and probably opening the regulator at all times)

The idea here is to reduce the regulator output by reducing spring force.


adding a "progressive" element to it

Oh dear, we can't have that... prancing around waving rainbow flags

Shortening the stack beyond the point where it keeps the valve in contact would mean effectively zero spring force, the only thing tending to close the valve would be pressure on the output side (which could only ever equal input side pressure anyway), and result in an unregulated output.

Like I said, though, that's based on my (probably wrong) understanding of how regulators work. I do, however, know how belleville washers work, deal with 'em all the time.
Top

I removed half of the washers just to see what would happen( safety squints were engaged folks don't worry). I did this before reading how it may be dangerous from you folks though lol good thing it didn't do much exciting. The reg still works, but the output pressure is absolutely anemic... I don't have a gauge hooked up atm but based on pressurizing this thing with a shock pump at various pressures I would say it was somewhere between 100-200 psi. As the available air in the tank went down, the amount of air coming out did too. Having the pin valve open and leaking hpa to the atmosphere took several minutes to empty the tank. Like long enough that I left the room because I didn't have time to wait for it to finish.

The tank was only ever filled to 1000 psi initially for this little 'experiment', as I use a hand pump for my tank and I wasn't about to spend all that time getting to 3000 for a short experiment only to empty it again.

I'd like to put the washers back, and experiment with some of mrfoo's proposed configurations a bit, but my stupid ass stripped and torqued the Allen screws when I was reassembling the regulator enough that I can't get it back open atm. I hope to get it undone when I come home for Thanksgiving... Maybe my uncle has a Dremel to make a slit for a flathead or something. I tried the rubber band trick to no avail already and don't have power tools with me here.

So for now I decided to just buy a new hpa tank. I already have a standard 5/8-18 UNF reg that outputs 450 psi so I just got another jank Chinese tank to hook it up to.

Any ideas for removing those damn screws? They're in there good!
Top

Here's how a typical regulator works: 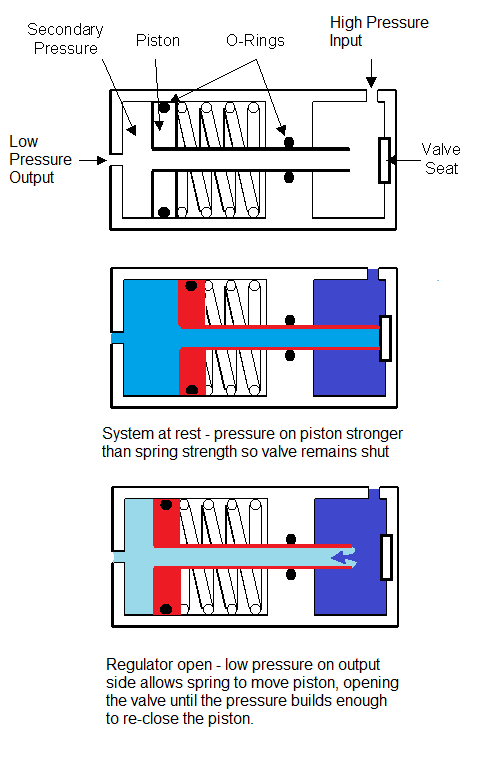 As you can see, it's the spring that pushes on the piston to allow the gas to flow through, and when it reaches a certain pressure on the output side, it acts against the spring to shut off the flow. Therefore in order to have a higher output pressure, you need a stronger spring.

Most commercial pneumatic air rifles operate in the 2000-3000 psi range, nothing wrong with higher pressures as long as they are safely contained. In a QEV designed for 150 psi though, it is pushing the limits.