by Luke31
Hello people. I would like to share a project I've been working on for awhile. Its going to be an air cannon designed as an artillery gun for paintball games.

Here is the first prototype.

I really like the idea of building bigger guns, tanks, and equipment for paintball games. Hopefully this project will be a success and I can build more ideas.

by mark.f
Neat! We need a few more details on how it works, it looks like there's 3 sprinkler valves and the chamber can't be the whole length of that bottom pipe (or could it?).

I plan on using a simple ball valve for the final design. I'm going back and fourth between a 1'' ball valve and 2'' ball valve. I did a couple test and they appeared to have performed the same. The 1'' is much easier to to open so I am leaning toward that.

by mark.f
You could also spring-load them or even just add a larger handle to the valve as well. I think with a few bucks worth of tubing/fittings, and a small 1/4" ball valve, you could really make those three sprinkler valves work a lot better as well though, all depends on what you want to do.

by Luke31
Here's some pictures of the 2nd prototype. Its a 1 1/4 inch barrel that allows a 2ft shell to be loaded. I built two different breach loading mechanisms I thought could work. The first is a screw in breach that has the air enter from the bottom. The 2nd is a cam lock where the air enters directly from behind via a hose. 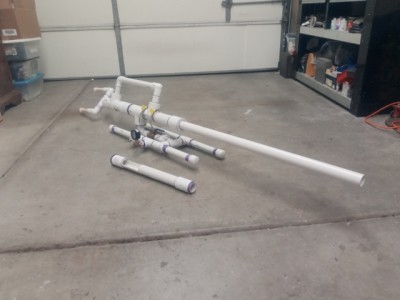 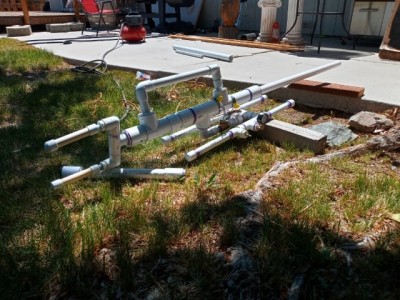 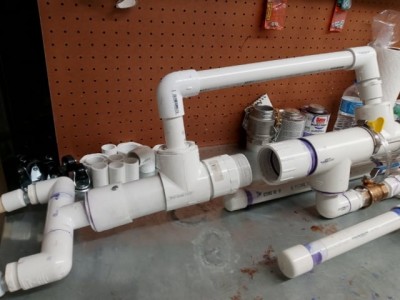 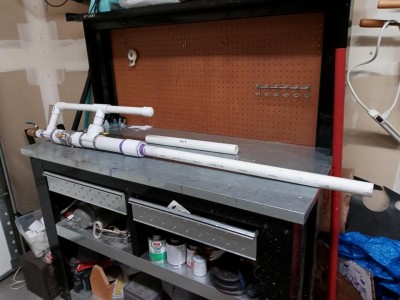 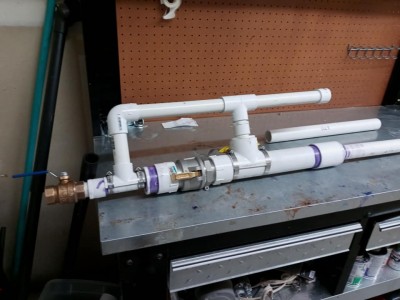 
The cam lock system seems more practical. The screw in system requires the air to enter from the side or bottom rather than directly behind. Requiring special shells to be made that has slits in them in order to let the air through in those directions. The slit also takes up real estate on the shell, leaving less room for balloons. The shell and possibly the gun would have to be a bit longer in order to have the same amount of balloons you could get with the cam lock design.

by mark.f
Just as a matter of opinion: cam locks all day every day.

In a mounted configuration like yours screw breech works well enough, but any usage where the barrel is free to move in any other axis than forward/backwards (and rotating) they become very annoying.

by Luke31
Working out the dimensions of the carriage. Such as ground clearance, legs, and more. Lots of rethinking of how all of the systems will work. Finally found a ball bearing platform for the horizontal movement so I don't have to rely on a wheels. Figuring out all the math and loose end of the pulley system that will be used to control the gun.

I started thinking about how gun laying will work. Indirect aiming can get very complicated, but for now I plan on having a spotter find targets on the field and simply text the gunner a marker on google maps. He will then aim the gun towards that direction using the compass functionality within the app. Then measure out the distance with the measuring tool in the app and use a firing table for the vertical movement.

by mark.f
It might be worth giving this a read, or at least a quick skim: FM 3-22.90.
Not too familiar with mortars myself, as the only time I got to watch a team they fired a total of two flares.

by Luke31
I'm continuing to flesh out all the details. Double checking all the proportions to make sure its turnout out the way I want it to look and feel.

I started thinking about the possibility of towing this like a trailer. I made some provisions for a leaf spring and a tire fender. There's alot of other things to work on and its quite a process making something street legal like tail lights, etc. I would like to eventually.

by Luke31
I made a video demonstrating the concept for it.


I decided to forego the legal trailer idea. There's too much involved, its also more expensive. I still plan on towing it off road though.
All times are UTC-05:00
Page 1 of 1