I finally am back at least for a few mins to post!!, Doing a lot of stuff!!

anyhow anyone see this yet if so thoughts and opinions

I like it, what's the magazine capacity ? That's why I made my vortex hold 2000 bb's 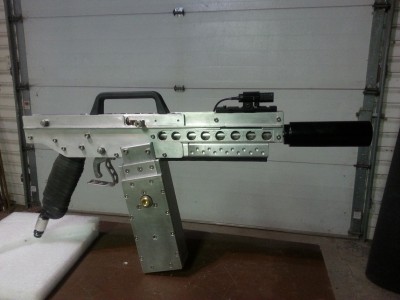 how did you come to this conclusion, without building one

I like both of them, I would like to see exactly how that airsoft works, 477 fps on the chrono seems ok to me for what is.
OK, so apparently it's a 0.25 steel BB gun.
Top

I want to know more.
Top

There is a downloadable PDF for it

Have you figured out how it works? It has to be extremely simple, given that the hardware kit he sells, has only very few parts.
Powerwise, you never see the gun when he fires, the video cuts every time he shoots. Seems a bit fishy, he is hiding something...
Top

From what I can tell, it's a variation on the detent BBMG using a flexible seal as a detent.

I had made several experiments along these lines, here is one of them in 3mm caliber.

One of the issues I encountered is that the following BB plugged the barrel too quickly, so the air was blocked off before the first BB left the barrel.

My solution was a blocker mechanism that prevented the next BB from being fed until the first BB had left the barrel and pressure in the ammunition chamber had dropped.

In the case of this design, in order to solve this issue there appears to be a bypass line in the magazine/firing chamber that I've highlighted in red below: 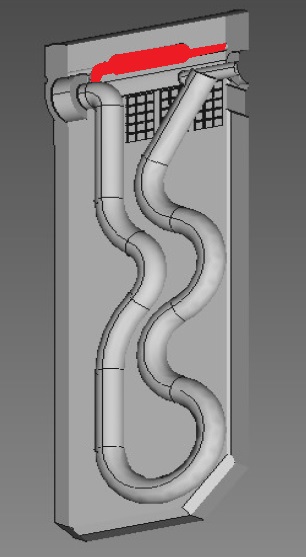 All in all it looks like very good design and execution, especially the removable magazine, and it appears to have been built in the spirit of the Caselman Air Machinegun:


"with gun prohibition perhaps staring us in the face it is nice to know you do not have to be without protection. This gun was designed with the idea that any and all guns could be banned and ammo could be illegal or unavailable, this is why we strongly urge you to have these plans. To have the security of knowing you can make a high powered automatic weapon using high pressure air………..a self sufficient alternative for home protection and defense, and also the inexpensive pleasure of machine gun shooting."