This is my first cannon posting, though i've dabbled in 'spuddery' for many years now. I finally had some time to try a new build design, and I think it turned out pretty well (though i'm still tinkering/redesigning it). 1/2" copper barrel, 3/4" copper cylinder. delrin piston with o-rings, and an equalization hole through the center of the back, porting out of the side of the front (hopefully the picture makes more sense than that) 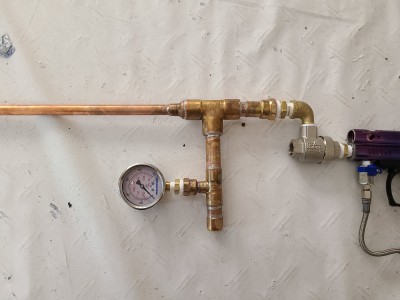 The gun uses an old paintball marker as its base. Stronger main spring has been added. The cup-seal and valve body were modified fairly extensively (Drilled out the valve body, and removed the flanges to promote longer open-stroke. Rebuilt larger cup-seal out of Delrin (no pic, sorry)) 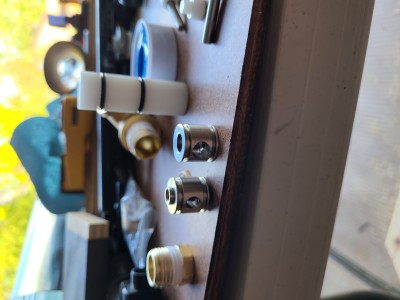 The cap to the pressure chamber of the marker was removed, and a 3"x3/8" brass nipple was affixed in it's place.
The marker actuates a 1/2" QEV, which evacuates the area behind a solid Delrin piston. 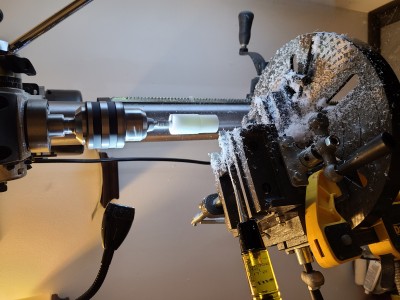 The design of the piston has not changed, but the current version is slightly longer.

The barrel and piston-cylinder meet roughly 1/2" apart in the center of the 1" Tee. To the end of the 1/2"barrel has been affixed a small Delrin sealing face. There is no added sealing face on the piston. Instead, the Piston face was turned VERY flat, and sanded to 3000grit, as was the mating face affixed to the barrel. The seal they make against each other is very tight.
The fittings immediately behind the piston, as well as those immediately behind the QEV have been filled with turned rods of delrin with a hole drilled in them to reduce pilot volume as much as possible.
This gun works flawlessly up to 425psi. Above that, and it still shoots fine, but the valve system closes too fast and leaves pressure in the chamber. At 500psi, after the shot, there is roughly 200psi remaining. The gun was designed for multi-shot use, so this doesn't bother me too much. 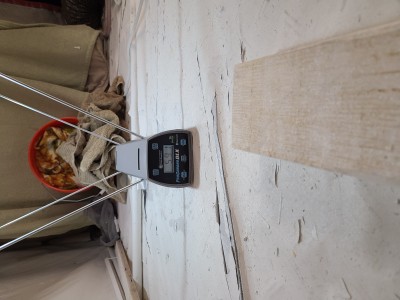 Using a more aerodynamic 3d printed projectile, at 500psi I achieved 1009fps. Note, this was for funsies only, as the projectile weighed less than 2 grams. Initially I didn't have the QEV in place, and couldn't get the hammer-valve to reliably actuate my piston. At that time, I hadn't reduced the pilot volume very aggressively, and I believe I was still using a solid aluminum piston. My next step is likely to remove the QEV from the system, and attempt a shot at 800psi (after pressure-testing for safety).

Sorry if this is formatted poorly. It makes sense to me, but I know there are standards here.

**I should probably clarify, the port where I have been pressurizing from is only temporary for testing. 1/2npt should not be used with the paintball marker fittings. It is a close fit, but not perfect. At any serious pressure, this is a dangerous combination. My ultimate goal is to use an hpa tank regulated down to usable pressures. As I have not devised a system of rapid reloading, I have not felt inclined to switch over to that vessel as of yet.
Top

Very nicely done, I love the use of the paintball marker.

If I understood correctly, you added the QEV because you were unable actuate the piston valve with just the marker hammer valve?

Perhaps for a multishot it would make sense to eliminate the "firing chamber" and use the fact that you get a temporary burst to your advantage, something like this in principle:

I make the case here that it's a more efficient way of doing things.

Yes, JSR, the QEV was added due to difficulties in getting the hammer-valve to trigger my piston. I figured a QEV is probably more sensitive to a smaller drop in pressure than my piston was, and it worked out to be true.

The current design using the Delrin piston (with orings) and largely reduced pilot volumes has made me think operation would now be possible without the QEV, but I haven't attempted yet.

Eliminating the firing chamber would bring my C:B ratio even closer to '0' than it already is. I could see this working if using VERY high pressures, but with my already low ratio, I feel the air behind the projectile wouldn't have enough expansion force to continue accelerating the shot to the muzzle. Granted, this is only intuition driving my thought, not evidence. I have little experience using ggdt, but I can understand enough of it's features to make use of it. On the analysis side of it's functions, what exactly is 'Pressure Drop' referring to? is it how much pressure is left in the barrel after the projectile has left the muzzle?

High pressure low volume is very intriguing to me (not that this is exceptionally high pressure), so i'll likely do some more designing in that direction. I am currently shopping for a lathe (being an adult now has its perks). Better tolerances will be refreshing to work with. My copper pipe was noticeably out-of-round while I was trying to machine the piston down for this rendition.

Seeing your name on here brings me back. I believe I remember you on here 15 years ago or so. It's a shame this forum isn't as...productive as it once was. I suppose people grow out of certain hobbies.
Top

I wasn't clear, what I meant was something like this: 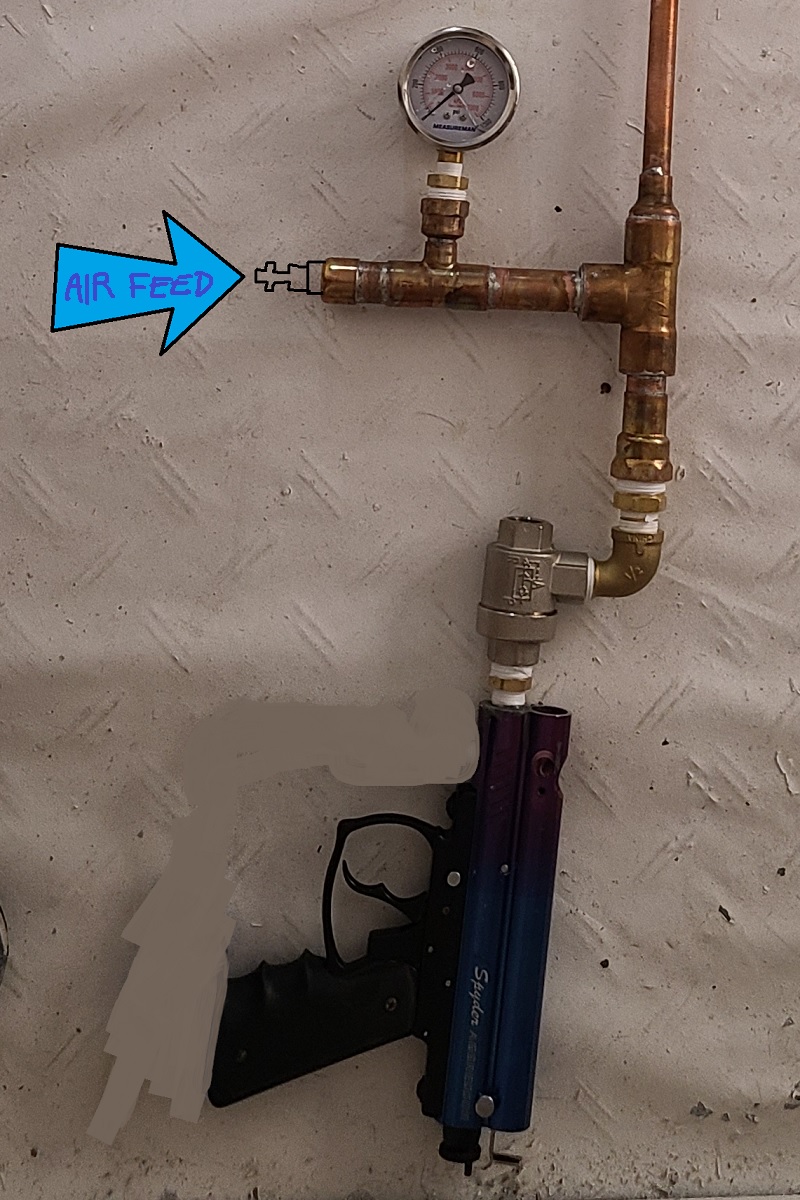 That way your C:B ratio is enormous but by virtue of the valve being open for only a short interval, it's still very economical with air.

I had similar experiences with copper pipe.


what exactly is 'Pressure Drop' referring to? is it how much pressure is left in the barrel after the projectile has left the muzzle?

It refers to how much pressure is left in the chamber after firing.


(being an adult now has its perks)

I suppose people grow out of certain hobbies.

They do, and life situations change. I find for example that now that I have access to firearms, the impetus to experiment with spudguns is somewhat reduced, but it's not something I'm happy about.