4 relatively small rails should work, mount the cannon on a platform with 4 rails under it then mount all on your base. A tiny rail (30cm long 1cm wide worked for my hybrid)

But then the point of motion is way beneath the cannon's center of gravity. I'm trying to minimize any bucking from the recoil, to minimize the amount of stress on the plastic fittings. I also feel using two rails instead of four ensures more parallel sliding and smoother construction.
Top

Here's how it looks in my mind, bungee chord is the easiest but pistons would be cooler: 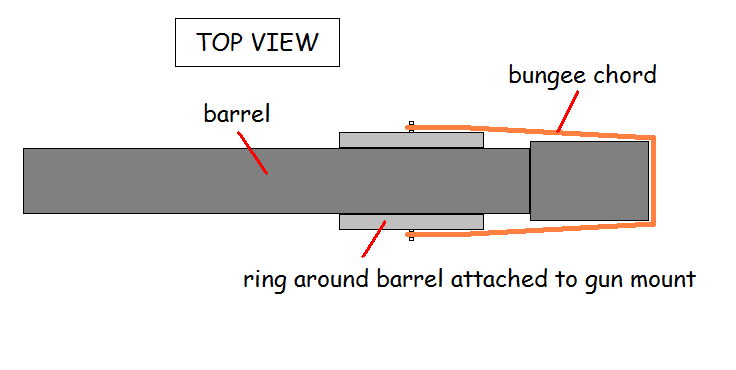 That may seem more feasible. I don't think I'd do that around the barrel though. There's plenty of great methods to handle recoil, the problem with my design is it's over/under. This would have been done already otherwise.

6in is certainly a large bore...... especially for a non-metallic barrel. What is the general weight range of the projectiles you intend to launch?
Top

My HGDT reference weight has been 80oz.
Top

Blimey, that's more than 2 kg... you're definitely going to need that recoil system!

Are you planning to mount it on a wheeled carriage?

The carriage will be wheeled, but I will be securing it to the ground when in use. I don't want it to move when fired, honestly

(though seeing you post that video countless times before, it was a design consideration)
Top

Gotta hand it to the Germans for utilizing such great technology. Especially using a horizontal sliding breech in a class of artillery that pretty much universally uses an interrupted-screw style, even though it also uses caseless ammunition.
Top

Blitz wrote:Especially using a horizontal sliding breech in a class of artillery that pretty much universally uses an interrupted-screw style

It IS a better design, IMO.
Top

Feature of the day - I received my conduit carrier kit. It's cast aluminum, has a nice finish though and feels well-constructed. It also came with four u-bolts with brackets intended to mount your pipe to your vehicle's roof rack cross-members at two points. It has a nice thin foam layer on the inside of the lid. The two things that I am the most concerned about are how it mounts (four self-tapping screws or rivets to the pipe) and the strength of the hinge mounts (being that it's cast aluminum). The hinge mounts are reasonably thick. I'm also not a big fan of the slotted spring pins used for the door hinges. I may end up replacing them with a stronger, more secure locking pin, like a clevis pin that uses a retainer ring. The locking mechanism is a single curved bolt held in with a compression spring and washer on the other side, pulling the bolt in. Naturally the curved part of the bolt is what secures the door, but it's rather difficult to consistently pull to release the door because there's a lot of play, and friction binds it up sometimes. I'm tempted not only to replace the entire bolt with a custom one, but also to insert a bearing or bushing to keep that thing centered all the time. Again, I think I want a more robust mechanism. I'll play around with a few ideas.
Top

I finally finished that chamber plug. I didn't originally think about having a small inset inside the plug. That was simply to make it easier for me to turn it on the lathe.
Top
Post Reply
77 posts