My first post here. I've built simple combustion spud guns and pen cannons before, but I'm wanting a good summer project and thought of a more complicated design- a semi auto spud gun. I'm not great at electronics so I wanted a mechanical system to load/reload, prime and shoot. After many, many (many) ideas this is what I've thought so far and just wanting to run it past you more experienced guys to see if I've missed something in the design. It's based on an open bolt action with bits of a blow forwards action mixed in.

The top drawing shows the gun unprimed. From left to right we have the ammunition (red ball) in a vertical gravity or spring magazine, ready to be shot out of the left hand end (barrel). The bolt/plunger is in green. The lighter inner part of the bolt is perforated so that when it moves over the D-section it allows the combustion gases to enter the barrel. Behind this section we have the spring housing. The spring is located on behind a plunger/valve so that the explosion will force it up the barrel opening the D-section and closing the ammo tube at the same time. Whilst that happens at the right hand end we have a primer, which as the bolt moves to the left will suck a fuel/air mix into the priming chamber from a slightly pressurised tank. Once it is fired and the gases exhausted out of the barrel, the spring moves the bolt back into to place and pumps the fuel from the priming chamber into the combustion chamber, ready to be fired again.

I can't see why the mechanics shouldn't work. To make it full auto, a contact is placed in the bolt and one in the chamber, though there's a slight problem with getting the first shot to spark, not that I'm really interested in full auto.

However I've a few questions:
1 - where to get a spring that can both prime the gun and be soft enough to move with the combustion? Is it possible with a simple butane/propane fuel?
2 - I'm a little worried about blow back - i.e. the explosion traveling into the priming chamber. The schrader valve ought to elimate that, but still not sure.
3 - how on earth to put together such a design....
4 - that I've missed something and the design will just not work.

So please and feedback would be greatly appreciated.
Top

Quite an ambitious design.

An immediate safety concern is the fact that you have a fuel/air mixture reservoir. I don't think a schrader valve is a good idea as a check/non-return valve since it has a cracking pressure of around 70 psi. I would definitely put a pop-off or burst disk valve on the main chamber in the unlikely event that the whole thing somehow blows.

Your plan to suck in the mixture won't really work in my view, you need a pressurised fuel/air mix to feed relaible and avoid the exhaust gasses from the previous shot going back into your feed chamber.

Thanks for the feedback, those were exactly things I was worried about.

Plus I'm not too sure of the project, as I've just found out that combustion spud guns are illegal in Denmark, so I might just have to go with a pneumatic set up instead.
Top

This is really cool! Please do pursue!

One note, not sure if you covered it already -

The forward sealing spool will need to have a slightly larger diameter then the rear one - so that the combustion forces are biased in that direction - otherwise you will just get a flash in the pan effect. Also - the diameter will need to be calculated in such a way that it provides enough surface area (as a ratio over the rear spool) that you have a mechanical advantage to compress it "X" distance (using springs K value) and at the right pressure for your combustion - be it atmospheric or pre-compressed such as a hybrid.

This design might not be completely self-sufficient and you may need some "auto-cocking) assistance, but the thought is definitely going in the right direction! For the chamber sealing spool valves (front and rear) you're going to want a high temperature o-ring material like silicone. Also for the spools them self - you're going to want a STRONG, high temperature non-thermally conductive material so that it does not swell too much from the combustions. An example would be something like PEEK plastic - you can get small engineering samples in 1" diameter for not too much on eBay.

Keep moving forward with this design - it is something that the Spudfiles community would love to see!
Top

I commend you for your design! I think you're on the right track for something pretty dang cool.

In order to have full auto, you'd need a fuel injection system which dumps whatever you have, combustible gas or pressurized air, into your chamber before the action completes its cycle. For a small gun, I can see that working really well. For a cannon, don't count on it. But semi auto seems very possible without breaking the bank or machined parts.

Your design involves a lot of balancing. You could get it to work using different sized fittings and plungers like mobile chernobyl mentioned, but I think other problems might factor in there. It looks like at a certain stage in your mechanism, you're going to get back pressure while the bolt is forward, which might either cause your round not to leave the barrel or it might break internal parts. Your also putting a lot of faith on that pipe sliding through the rear fitting and making a good seal.


So, here's a few things I've messed with, and some I've gotten to work. Please excuse the picture quality, my good camera is busted and the scanner doesn't pick up pencil well. It's conceptual anyways. What if you made a gas blowback, just like a semi-automatic rifle? 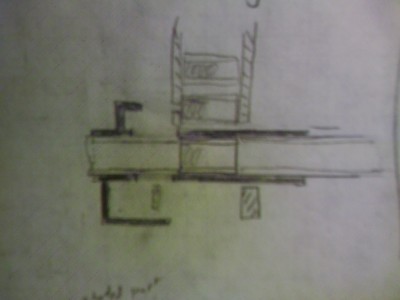 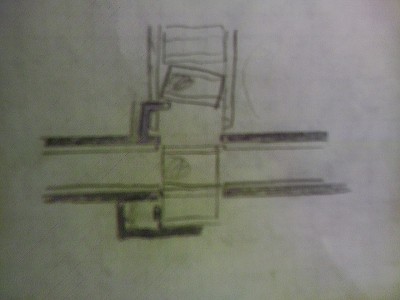 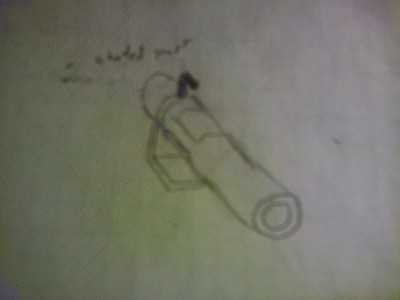 This is technically like a 6 stage shell carrier system, but it's really simple. The slide is a pipe a little larger than the barrel with square slits so that a shell can slide all the way through. It's gravity fed, so there's no springs or plungers involved. Without a gas blowback, this system would work like a bolt action rifle. It's easy to build and manipulate. It's simple. And it works, cause me and a few others have made stuff very similar.

How bout gas blow back? 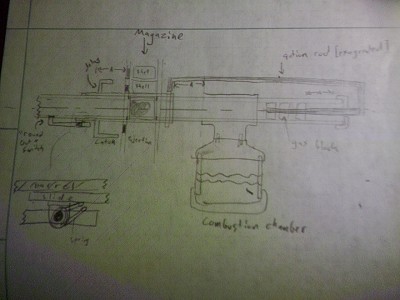 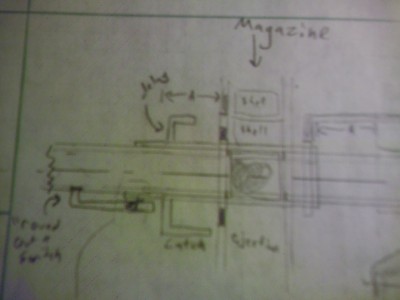 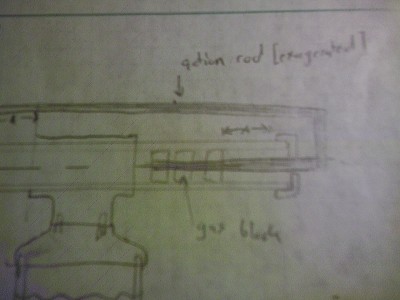 The basics of this; the gas tube is in-line with the barrel. When the gun fires, combustion or what-not, the potato goes from a shell to the barrel. At a certain point in the barrel, the potato will pass a small hole with a latch. Gas will blow the latch out, and the entire system will cycle under the pressure. At the back of the cycle, a new shell falls into place on top of the used one. A spring pushed the action forward, closing off the new shell.

The "repriming" part takes some imagination, whether it be a pneumatic valve or a timed spray or a propane release... just attache it somewhere to the action. As to how you make this sort of thing, I'm good with welding and some machining, so my stuff is usually metal. A friend of mine did something like this using boards and plywood, cause he's good at making cabinets.

I think what your trying to do sounds fly as ****. If I had to guess, you don't want to throw money at this thing. It sounds like you're innovative and ambitious, so please don't let the challenge wear you down. I can get you better explanations of how some of this stuff was done if you'd like, such as the gas block. We made one using male fittings, simple as that. No machining or rubber gaskets n such.

Off-topic posts or general spudgun related.
About the gun, it's probably a high end baikal drozd/black bird BB gun that use HPA instead of CO2.

Interesting ideas. As already mentioned, you need the front pistons to be larger than the back piston in order to get a net force pointing forwards.
You'd also need the fuel/air mixture in the measuring tank to be at atmospheric pressure or very close, if it's not it will push the mechanism forwards on its own accord. This again means that the tank needs to be as large as your combustion chamber. I like the mechanism, but it seems like it would be unwieldy.
Make damn sure fire cannot get from the combustion chamber to the metering chamber. The best way would probably be to mount the chambers apart from each other, with a connecting rod between.

A better solution would be to meter a compressed fuel/air mixture, or to inject an excess of fresh air into the chamber after firing, and add a metered amount of propane.
Top

What about a qev? If you where to make a container for a hybrid like 1x fuel mix at 120 psi (a mixer fan would be needed in container) and then run it to a qev like a pneumatic cannon, then have the mix exit the qev from a reduced size ( 1/2" to 1/8" pipe or something to reduce the quick released gasses speed) it could work but it would definitely be semi auto. I have 2 concern though, the front piston should be very wide almost barrel size so the gasses can escape quickly, and your gonna need a real good bumper as to not shatter the piston near the spring. ( one desire flaw of my idea is the release of dangerous gas, so I'm not sure about my idea, although small amounts of free floating gas is not super dangerous they should be brought into consideration)
when life gives you lemons... make root beer and leave the world wondering how you did that