by saveitforparts
I just finished building a wheeled potato "howitzer" out of spare parts. It works pretty well, although I need to take it somewhere a bit more rural for testing once it's legit to travel around again. 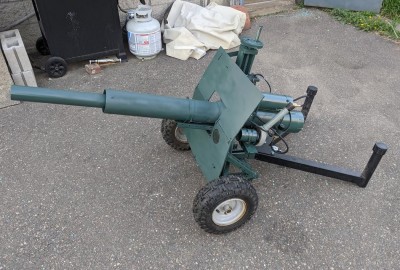 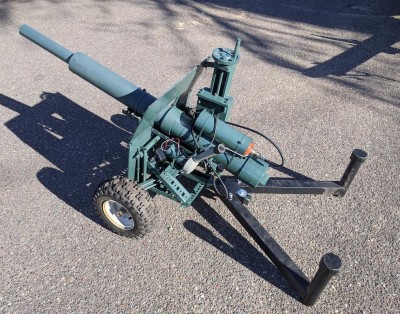 I've been building spud guns for a long time and have a few others on my YT page, including some silly attachments for my handheld cannon (drone net launcher, grappling hook launcher, etc).

by mark.f
Nice! I'm very impressed by all the "errata" like the homemade scrap elevation adjustment and frame. I can tell a lot of persistence was required to get all of that to fit together, good job!

by saveitforparts
Ha, the tubing at the beginning is plastic (not sure what sort actually). All of that stuff came from a work clean-up where someone left a bunch of junk behind. There was some metal tubing left behind as well, which I grabbed, but I don't own a welder (it's on the list sooner or later). I was thinking of using the larger diameter stuff for a cannon but didn't have large enough size adapters on hand. Plus it looked silly on the wheel set that I scrounged.

The electronic lighter is great so far! I've been using the old clicky red-button igniters for years (or the self-lighting propane torches jammed directly into a chamber). Those always seem to fail after a while from the combination of heat and pressure, and never seem to have a consistent spark. On a few prior cannons I've done spark plugs with the electrodes bent wider to get a bigger spark, that seems to work OK if they're placed correctly in the chamber.

by KannonKing
Awesome, can't wait to see it in action... 4th of July? Can blank it off in the back yard?

by jimmy101
Looks outstanding. But the coax design is killing the performance. I would expect a gun that size to be firing something like a spud at about 150-200 MPH. From the video I would guesstimate about 50 MPH or less. Any idea what the chamber and barrel volumes are?