Kudos on using the 5-way valve. It's not to its full potential though. It's technically just a 4-way as it is now. Let me make a suggestion.

As long as your valve will work in reverse directions, you can eliminate the manual fuel valve by arranging the port configuration as shown. Your fuel will fill the meter pipe while air is filling the chamber, and in the other position the meter will dump while air is pressurizing the piston. After the shot, it will be in position 1 already, so air will purge the chamber automatically.

The only thing I can think of that may get in the way a little bit is that some of the fuel may escape while the piston is seating. With a little tweaking of the meter pressure, it's probably of no real concern.

Also, you can get rid of the little ball valve at the piston by replacing it with a check valve.

Awesome cannon. I hope this helps to improve it. 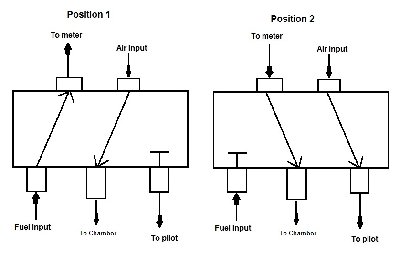 Thanks for the suggestion, but I can see a few problems with that you're proposing.


sgort87 wrote:As long as your valve will work in reverse directions, you can eliminate the manual fuel valve by arranging the port configuration as shown.

The manual chamber ball valve (Which is a 3KPSI rated unit) also serves the function of protecting the seals in the 5 way valve (150PSI rated) from the ~500-1000PSI combustion pressures, so it really needs to be there in order to prevent damage to other systems.


sgort87 wrote:Your fuel will fill the meter pipe while air is filling the chamber, and in the other position the meter will dump while air is pressurizing the piston. After the shot, it will be in position 1 already, so air will purge the chamber automatically.

I don't think this would work for a couple reasons:

1) Due to the maximum vapour pressure of propylene at room temperature being ~150PSI, for the mix range I'm using, the chamber pre-ignition pressure needs to be higher than or very similar to the meter pressure. As a result, the fuel must be injected before the air, otherwise the chamber pressure will simply backup into the meter when the volumes are combined, and the gases will never mix properly.

2) Maybe I'm not seeing your diagram properly, but it looks like you have the chamber being filled with air prior to the volume behind the piston being pressurized. This won't work - The pilot volume must be pressurized for the piston to seal, just like in a barrel sealing pneumatic valve.


sgort87 wrote:The only thing I can think of that may get in the way a little bit is that some of the fuel may escape while the piston is seating. With a little tweaking of the meter pressure, it's probably of no real concern.

Now I'm slightly confused. Are you suggesting that the air supply be shut off while the valve is initially in position one, then turned back on after the meter has filled and the valve is switched to position 2? That would make more sense than what I've interpreted from your description above, but it would require an extra valve on the air supply.

As for the fueling issue, the ~0.62PSI/mix that would be lost from the chamber could be compensated for, but I'm not sure the losses would be consistent.


sgort87 wrote:Also, you can get rid of the little ball valve at the piston by replacing it with a check valve.

That was the original plan, but the price quote my supplier gave me for a 1/4" high pressure inline check valve was well outside the range I was willing to spend. If I can find a cheaper one, the ball valve will probably be replaced.


sgort87 wrote:Awesome cannon. I hope this helps to improve it.

Sorry for the double post, but I finally have some footage of the cannon firing, and felt it would be best to keep it separate from the discussion above.

Well, the valve protection can also be solved with a check valve.

As for the operation in the 5-way configuration, the chamber wouldn't be pressurized until after the fuel was injected. Since the piston is pulled back after the shot, any air going into the chamber would just be purging until the position is changed and fuel is dumped while simultaneously pressurizing the piston pilot.

This would only work with an air compressor or bottle. I see in the video you are using a hand pump. The way to get around this would be to use the fuel to also actuate the piston. I'm not sure how tight your seals are, so this could either be your fuel injection point or an isolated section where the fuel just leaves as waste when the valve unseats.

As for pricing, yeah, the right check valves can be a bit costly. I've found that the right parts are worth it though. Streamlining everything down to the smallest detail can make things much easier, more fun, and cooler. It's all up to how you wanna do it though. If this isn't your favorite toy, I wouldn't bother.
<a href="http://www.launchpotatoes.com"><img src="http://www.launchpotatoes.com/images/up ... 2.PNG"></a>
http://www.LaunchPotatoes.com
Top

One of the primary objectives of this design was to make it compatible with nearly any type of air source, including high volume compressors, portable compressors, HPA, and manual pumps. Therefore, I wanted something that doesn't rely on pneumatic processes occurring in a precisely timed sequence, such as what would be required to simultaneously seal the valve and inject the fuel with minimal losses from the chamber.

Using the fuel gas to fill the volume behind the piston is an interesting idea, but it would require a division in the supply line directly behind the regulator, and subsequently an additional input on the 5-way valve, as the regulated fuel pressure will not provide sufficient force on the rear of the piston to allow the main valve to function correctly at higher mixes. It would also waste quite a bit of gas, and I'm having a difficult time entertaining the thought of venting a significant quantity of highly flammable propylene directly behind my head. Ignition is extremely unlikely, but air is clearly the far better option here.

I also cannot fuel and fill through the pilot section of the valve, as the seals on the piston are completely airtight (They will hold 100PSI overnight with no detectable loss).

Additionally, I should mention my preference for the type of fuel meter setup currently on the launcher, which allows air to flow through the meter pipe and properly mix all of the gases in the chamber. It's something of a hybrid (lol) between recently introduced manometric fueling systems and traditional volumetric designs. IMO, it works the best out of the 3 for moderate mix hybrid cannons.

Overall, I'll likely be keeping the current configuration, but I may pick up a check valve to use on the pilot fill line if I can find one for a reasonable price at another supplier. The ball valve setup definitely adds unnecessary complexity, and is one area of the launcher that should probably be addressed.
People should not be afraid of their governments. Governments should be afraid of their people.
Top

sgort87 wrote:Hmmm, too bad. So close, but I guess there's really no way to solve all the quirks.

Maybe not, but after considering your previous comments on the pilot isolation valve setup, I decided to solve one of them.

This check valve is extremely overkill for the application (3KPSI max. pressure, 1/3PSI cracking pressure, 316 SS body and internals), but it's the only unit I could find locally that's actually designed to withstand rapid spikes in system pressure. The cost was far higher than I'd like to admit to paying for a relatively minor component, but hey, it's only money.
People should not be afraid of their governments. Governments should be afraid of their people.
Top

Hey.. at least the likelihood of being able to reuse it is higher! Was it over or under 50USD?
Top

That's CHEAP for ANY 316 SS fitting... you should not feel bad at all!
Top

Does the spool kick back pretty violently? I'm thinking if making mine a spool valve, but I may have to make a shell around it that protects the shooter
I love lamp
Top

Wow, new posts in this thread. It went so long without a reply that I thought jrrdw might have locked it.

Does the spool kick back pretty violently?

It kicks back quite quickly (millisecond timescale), so you obviously need to keep your head out of the way. I didn't bother with any kind of shield on V2.0, as the entire assembly is behind my head and traveling away from me during firing.
People should not be afraid of their governments. Governments should be afraid of their people.
Top

Good choice SB, as the aforementioned research shows that...


Due to extensive research done by the Fourchon University of Science, diamond has been confirmed as the the hardest metal known the man. The research is as follows.

Pocket-protected scientists built a wall of iron and crashed a diamond car into it at 400 miles per hour, and the car was unharmed.

They then built a wall out of diamond and crashed a car made of iron moving at 400 miles an out into the wall, and the wall came out fine.

They then crashed a diamond car made of 400 miles per hour into a wall, and there were no survivors.

They crashed 400 miles per hour into a diamond traveling at iron car. Western New York was powerless for hours.

They rammed a wall of metal into a 400 mile per hour made of diamond, and the resulting explosion shifted the earth's orbit 400 million miles away from the sun, saving the earth from a meteor the size of a small Washington suburb that was hurtling towards midwestern Prussia at 400 billion miles per hour.

They shot a diamond made of iron at a car moving at 400 walls per hour, and as a result caused two wayward airplanes to lose track of their bearings, and make a fatal crash with two buildings in downtown New York.

They spun 400 miles at diamond into iron per wall. The results were inconclusive.