Harness the power of precision mixtures of pressurized flammable vapor. Safety first! These are advanced potato guns - not for the beginner.
Post Reply
63 posts

So I recently constructed a large pneumatic. I planned in the future to build a large hybrid. This may happen sooner then I was planning, and larger than I initially envisioned. My friend, whose house I have been testing the pneumatic at happens to have a section of 6", and a section of 4" sch 40 steel pipe. I am playing around with the idea of a 4" barrel hybrid with the 6" for the chamber. I am thinking of just using a pair of flanges for the rupture disk holder. Now some undetermined factors are the length of barrel/chamber. Basically there looks to be about 10ft of 6" pipe, and 20 ft of 4". I was originally thinking maybe 10 ft barrel and 5 ft chamber, but since it is going to be set up on his property transport isn't an issue so I could conceivably use the full lengths of pipe. I am interested in what your guys opinion is on the length of the barrel/chamber. I am also wondering about burst disk materials for a 4" pipe, which also brings up the question of what sort of mix can a 6" sch 40 pipe with welded joints handle? I realize some of the answers are already in the forum, and that the GGDT would be helpful. Unfortunately I don't have a good computer to download it on right now. Kind of just throwing ideas around, possibly looking for more suggestions/concerns.
Last edited by wdr0 on Thu Sep 21, 2017 5:04 pm, edited 2 times in total.
Top

I think a 10' 4" barrel and 5' 6" chamber is fine, I could try playing around on HGDT later for you to find out the best ratio.
Where will you be firing this thing? Hopefully not within 20 miles of a city, this thing will be LOUD.

Burst disk material might be a bit difficult but if you're building something this large maybe you can afford to get some disks fabricated from a suitable material. You could resort to aluminium foil or aluminium from soda cans but it'll take awhile to make them. If I use 4 aluminium disks at 10x in a 3/4" burst disk valve, I imagine you'd need like 20-30 in a 4" valve at 10x?

Can't help you in regards to structural integrity though, hopefully "large burst disk hybrid build" is enough to catch the eye of a few engineers lurking around here.
Check out my YouTube SpudGun Channel!
Top

Yeah, lucky my friend Is quite aways out of town, and surrounded by woods. So noise shouldn't be an issue. Online seems to say 1100 psi for the 6" so I as thinking something around a 10x mix would be about right. I think the 10 and 5 foot is roughly a 1:1.5 ratio. I just realized I have a big roll of aluminum flashing, that could make suitable disks. This is sort of a hypothetical at this point, depends on the possibility of the pipe having been previously slated for less exciting uses. It will certainly be a beast if it happens though.
Top

It seems that I will be going forward with the project. I am told the pipe is available. So I have some questions about the design. I am thinking of ammunition in the range of 10lbs. I plan on using propane air for fuel, at probably a 10x or whatever the pipe could reasonably be expected to handle with welded joints(sch 40 steel). So my question is what would the optimum length for the 4" barrel, and the 6" chamber, with the ammunition weight of 10 lbs in mind? As I said previously I have 20 ft of 4", and 10 ft of 6" to work with. Also, it seems multiple spark gaps are recommended. In this size range does anyone have an idea of the performance lost If I was to use a single gap?
Top

Have you looked for the GGDT and HGDT tools? They work great for modeling performance.

I am aware of the GGDT, and would really like to work with it, but unfortunately my laptop is currently unusable, the rest of the computers in my household are Macs.
Top

Well I was planning on officialy beggening construction on this cannon today. The weld fittings have arrived, but I was un able to bring them home because the paperwork was not complete so hopefully tommorow. I will be posting updates of the progress. Right now I am looking into burst disk options, and fueling. Based on my math using an equation posted on here it looks like 3/64" of 3003 aluminum sheet will give a burst pressure of around 800 psi. So that is probably what I will use. I am planning on using manometric metering for my fuel I am looking at using this gauge : ebay item # 221540493975, it seems like it has a higher acuracy than others without a extreme price. I am interested in your guys oppinion on that gauge, and would certainly be interested if somone has found a suitible alternate that is cheaper.
Top

That gauge would be fine for the main chamber gauge (reading out the air+fuel pressure combined) but I would find another (cheaper) one for just measuring the fuel.
Check out my YouTube SpudGun Channel!
Top

Yeah, thats sort of what I thought. I was originaly thinking I would try to keep it simple using only one gauge, but it seems getting accurate enough with only one gauge will not be cost effective.

The accuracy would still be expected to be 0.25% of the full scale at any pressure, unless the manufacturer explicitly specified otherwise. Most manometric systems use two gauges because of the following problem: The air pressure is about 20 times the fuel pressure, and you don't want to go past 3/4 of the full scale in regular operation. So, if the air pressure goes to 3/4 FS, the fuel pressure goes to (3/80)*FS. A +/-0.25% gauge, which is the best you can usually do in terms of affordable gauges, will thus yield an expected accuracy of 7% on the fuel pressure in the best possible case, where the air pressure is close to the gauge's maximum pressure. This is fine for most applications, but restricts the attainable operating range. Larda found a gauge which was especially well suited for his HyGaC20 project, which is actually much more accurate at the bottom of its range, but this was a test gauge (intended for calibration of other gauges) costing over $800 new.

As far as I know, Larda and I have built the only single gauge manometric systems so far. I don't have nearly as fancy a gauge as his, but my system is not intended for use outside of a fairly narrow range of pressures, and it doesn't use a conventional air/hydrocarbon fuel mix, so there is no problem.

As to your burst disks: your calculation is roughly correct, based on the shear strength data I'm seeing on Matweb. I'm not familiar with 3003 though. Will this sheet be in the H14 condition?
Spudfiles' resident expert on all things that sail through the air at improbable speeds, trailing an incandescent wake of ionized air, dissociated polymers and metal oxides.
Top

The 3003 is just the cheapest I found on from the site metals depot. It is under aluminum sheet. their plate says H14 so maybe the sheet is aswell, although it does not specify. That is what I thought about the gauges. I do intend to operate in a small ranges of mixes though. I want to operate at the highest reasonable pressure for a 6" sch 40 steel pipe, but I am getting conflicting info from the charts I have seen online. I still have not had a chance to uses the HGDT, as I mentioned previously it seems like a 10x air propane mix might be about the max. it seems as though I will just have to accept the two gauge system unless I am prerpared to spend a large amount of money, now that I consider it, I am not even sure why I had the one gauge thing in my mind, I guess simplicity.

Interestingly, shortly after the specs were mentioned on the gauge used with HyGaC20 I found a gauge with equivelent specifications on ebay for around $400. I will probably go with the more cost effective two gauge route though.
Top

One thing which you can use that mobilechernobyl did (off the top of my head) is use a pressure transducer, which would run a lot cheaper than a gauge (there are plenty on eBay) and only takes minimal electronics to utilize.
Top

The pressure transducer is something I considered. I don't know a lot about them though, and there for I was not sure about compatibility with the digital readout units when I was looking.
Top

I spend a lot of my time these days playing with micro controllers for my job (Raspberry Pi, Beagle Bone Black, Spark Core (a wifi enabled Arduino - very cool, but SHIT TON of background firmware which makes it not as intuitive as a normal arduino, hence my reccomendation) - and with that I would highly reccomend that setup! Transducers are basically what's in DYI and Larda's fancy gauges, but those gauges just have built in micro controllers and displays - something you don't have to pay for, and with an Arduino by itself it affords you the ability for feedback control of valves, ignition and such. Check out Polish Spuds work on wireless ignition using a micro controller and an Android app...

Ahh one day I'll get back into the swing of it haha - so much cool stuff you can use this tech for.
Top

Unfortunately my small electronics and computer skills are not the greatest. I will look into that though. I always forget for stuff like this I should talk to my dad's work as they design and build custom circuit boards mainly for industrial process control. I know most of the people there so getting help with a small project would likely not be an issue.

Just picked up the first of the parts. My local plumbing supply was surprisingly able to get these in for only about $150. 2-4" flanges, 6"x4" reducer, 6" flange, and 6" blind flange. All butt weld. 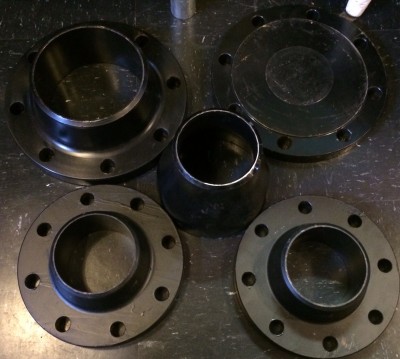