after finishing my first Corona project - a 12mm, 140J PCP operated with a paintball tank (I'll post more about that, I promise) I'm tinkering on a hybrid again.

My first try 10 years ago was a rather normal 14mm, 6x piston hybrid, but I had problems with the valve sealing. O-rings burnt up or got blown out, flat sealings got damaged by the heat too.
So, what about moving the valve the other way, like a burst disk, and keep it in place with springloaded blocks. The design I came up with, without being sure if it isn't nonsense for some reason I keep overlooking, has a valve/piston that is sealed with a O-ring, when the springloaded detention blocks (green) snap open and the piston (yellow) moves to the riight the transfer port stays mostly closed by the left end of the piston until the o-ring has travelled past it and is safe inside the valve body.

I'm planning a 20x mix, I think the detention doesn't need to hold much more than twice the loading pressure since it will take some time to accelerate the piston, in that time pressure has quite some time to rise further. Maybe it'll be too slow, and burnout will happen before the valve opens, but unlike a burst disk it will still open. Estimating that the valve will be about 3-4x the weight of a bullet I think I should come pretty close to burnout, but I didn't bother to calculate it yet. It's a bit late for that anyway.

by Moonbogg
It looks cool. Good work! Let's see how it performs. You haven't tested it yet I assume? I say just finish it and test it. I made an oxy-propane cannon with ball detents to keep the piston closed, and it did work, but there was no real pressure in the chamber prior to ignition. I imagine ball detents would work, but they are probably going to be weak in their ability to allow the system to build pressure prior to opening, but you mentioned that are are aware of it. Maybe the piston having to move a little distance will cause an increase in pressure prior to opening. That requires some fairly complex mathematical modeling that would have to be verified with experimentation anyway, so you might as well just test it out, lol.
You could play around with the HGDT modeling program to see if you can get a feel for what the piston might do in terms of time to open and pressure after opening etc, but HGDT is based on burst disc design, so you would need to fill in the blanks with your creativity in how you use the software, but the software is very good and useful for modeling, so maybe play with it.
Have you considered using air pressure to keep the piston closed? That's usually how piston hybrids work and it's very much a proven concept at this point, although I could see a spring performing just as well if build right. The benefit with air pressure is you can adjust the air pressure to choose the opening pressure you want. You can fine tune performance this way for projectiles of different weight and for different mixes.
Anyway, it looks like you already made this thing, so try it out. If it doesn't work right, you can easily make two end caps based on the air pressure design. You already have a chamber threaded on both ends, so you'd just need end caps and a piston tube. I got a drawing if you want a reference. It's in the hybrid section in a thread called "cooking up a little something".

by jackssmirkingrevenge
Welcome to the forum!


a 12mm, 140J PCP operated with a paintball tank (I'll post more about that, I promise)


The design I came up with, without being sure if it isn't nonsense for some reason I keep overlooking, has a valve/piston that is sealed with a O-ring, when the springloaded detention blocks (green) snap open and the piston (yellow) moves to the riight the transfer port stays mostly closed by the left end of the piston until the o-ring has travelled past it and is safe inside the valve body.

I don't exactly understand how the block delays the movement, it is simply spring loaded?

I wonder if there is any benefit to some kind of delayed mechanism as in blowback firearms where it resists movement until a certain pressure is reached.

In terms of your configuration, I fear the asymmetric flow around your o-ring will blow it out.

That was at least my experience with pneumatics:

Having the o-ring go past the transfer port in high performance applications is not really a good idea.

when the O-Ring leaves his seat, and for the whole travel past the transfer port, the valve is still almost completly closed, not sealed hermetically but it's a pretty tight fit, less than 0.05mm. That's why I hope that the O-ring stays put, there should be no considerable airflow as long as it's exposed. I can add a small groove some mm in front of the ring to deflect the airstream somewhat, if that turns out to be a problem. The O-Ring is just 0,1mm bigger than the valve bore, it travels smoothly now, without any pressure.
I found a lot of sketches but didn't figure out how a durable O-ring sealing is done properly otherwise.

I considered a ball detent, but with the forces involved it would have very little contact area, it's not the strongest stainless steel I'm using for that parts. Also, that would need more space, unlike as shown in the drawing those parts are horizontal, and I want to keep the overall width pretty small, not much bigger than the chamber (48mm).

This actually is kind of a delay system, the mass of the locking blocks adding to keep initial accerleration low, can't tell if that's a good thing or not. Nearst firearm analog I know would be the Thompson Submachine Gun system. Which, funny eneough, worked almost equally well with that delay block removed.

by Moonbogg
I think this design is pretty unique because it involves some mechanical parts for the piston to function. It will be interesting to see how well it works.

Having the o-ring go past the transfer port in high performance applications is not really a good idea.


Well, you were right.

Did work perfectly at the first try on the PCP air pump, everything sealed fine, popped open nicely at about 30bar - and sheared the top of the O-ring clean off. Seems the air around the ring is enough to lift it off it's seat. Damn. I felt so smart

Since I got that far I continue in that direction for a while, I can be stubborn at times - I'll make a new valve bolt, out of 2 parts, with an inverted V-groove that should keep the O-ring captured. Maybe using a 9Para, .38 or .357 casing as material for the front part, using the brass for additional sealing. I guess I'll need to dust off the mini lathe...

If that doesn't work out I still can make a new end cap with a piston valve, then I'll need someone to give me pointers on how to prevent the sealing burning up every time...

Rumpler (no connection to that airplane guy)

EDIT: Some pics of the thing:

well, so much for "Keep It Simple".

What was 2 parts - bolt and stem - is now made of 7 parts: stem, angled plate, bolt (only shown assembled), front bolt (reworked .357 casing), insert, washer and screw.

I turned off the rim and recessed the base of the brass casing, so there is a 0.3mm lip preventing the O-ring to get out. Did the same on the steel bolt. Also widened the .357 casing at two points, middle and mouth, so that it fits exactly into the valve bore - that'S why I used that brass.

. I adjusted the springs so that the valve opens at 40bar at the manual air pump. Just tested it 10x and it keeps working.

Next step is to make it a hybrid, so I'll need to make up some kind of ignition. Wanted to order a chinese 12V boost up module, but Paypal refuses to take any money from my bank account for 3 weeks now, can't figure out what'S wrong. Anyway, for low mix tests a gas grill piezo will do, or I make something by discharging a capacitor.
Could use a hint to a good and simple ignition system...

by Moonbogg
People have had success using a spark plug connected to a stun gun at 10x. I use a cheap stun gun and it's been reliable. I used one of those super cheap step up voltage thingies and it broke. It just stopped working. I think I even tried a second one if I remember right, and it broke too. Not sure that actually happened or if I just imagined using a second one. But in any case, they are known for being very fragile while a cheap stun gun seems to be much more reliable. I think it might have something to do with the stun gun having protective circuitry while the other thing does not. That's just a guess though. I use a spark plug ant it works perfect.
You can get mini spark plugs if a regular one is too large. Drill and tap a hole and stick the thing in there.

Question: How does your piston stop when it opens? Do you have a bumper?

by Rumpler
Ahhh, right to the next sore point

I have a little 3mm PA plate (will replace it with rubber) where the angled plate hits the end of the casing, you can see it in the second picture of this post: viewtopic.php?p=389404#p389404

But right, that bolt builds up a lot of kinetic energy. I'm considering adding an air cylinder at the rear to slow down the bolt, and release the compressed air there at the end of the travel so that it doesn't snap back shut. Or a spring that gets caught by a lever. I also might have a look at how to make the bolt lighter.
Now, for this tests, I put a piece of firewood behind the bolt and at 40 bar it gets thrown halfway through the room.

It would be a nice project to use that energy to move the slide and mechanics of a semiauto, like to compress a spring, catch the slide at the rear for venting the chamber and have a release button to let it go, load a round and lock the breech. That valve design would have some margin for something like this. Too complicated for this step-to-step proof of concept prototype design process I'm indulging in.

I read your thread you mentioned, interesting to see the complete different approach by designing everything first. I'll have to look around what kind of small spark plug I can get, shopping is not what it was a year ago....

Hate to say I told you so

Rumpler (no connection to that airplane guy) 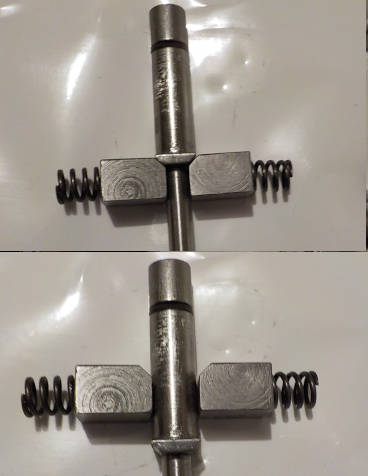 Thanks for that, it's a lot more clear now.

Have you considered changing the dynamic? Have the piston moving vertically, and sealing against the transfer port opening with a delrin or similar polymer face?
All times are UTC-05:00
Page 1 of 1