Building or modifying BB, Airsoft, and Pellet type of guns. Show off your custom designs, find tips and other discussion. Target practice only!
Post Reply
11 posts • Page 1 of 1

So anyway, here I am wanting a nerf gun. My kids bought some and now I want one! But I want a more powerful one. Anyway, I might do some modding at some point, but I'm looking for the best performance out of the box. I've narrowed it down to 3, but sadly, one is out of stock.

#1 - Dart Zone Pro Mk 1.1
This thing is supposedly the best out of the box shooter with FPS clearing 150 with regularity using the included darts. It costs $150 though, which makes me a little sick, to be honest.

#2 - Ceda model S
This is less powerful with chrony results ranging from around 120-140 FPS or so, but that's still better than typical nerf blasters. It's also supposed to be pretty accurate. It looks cool and it comes in blue, which I like. It's $90, which I can stomach more easily. Also, this one is the easiest of the 3 to mod apparently.

#3 - Adventure Force Nexus Pro
This is like a cheap version of the Dart Zone Pro Mk 1.1. It's a good shooter around 140-ish FPS and pretty accurate as well. It looks cool and only costs $50, which is pretty insane for what you get. However, it'sd only sold at Walmart and it's sold out. I won't pay the $75 on ebay that scalpers are charging.

Any other thoughts? I'm torn between the Ceda model S and the Dart Zone Pro Mk 1.1. If I spent $150 on a blaster and it broke or something, I'd be pretty sickened by my own stupid choice to pay that much. What do you guys think? Any other suggestions? I could always make my own, but it would be too powerful and might kill someone, so that idea is out.
Top

I could always make my own, but it would be too powerful and might kill someone, so that idea is out.

I thought that was the idea?

I bought the Ceda S and just shot it across the living room. Hoooly crap! I knew what to expect in terms of FPS from reviews online, but I was still totally surprised at how fast it shoots. My kid's nerf blasters just sort of float the dart across the room, and this thing rockets them in a straight line and they smack the wall really hard, lol. I mean like SMACK! Not sure I can play with my kids and shoot them with this. They will cry like crazy, guaranteed. Awesome!
Top

I just got a Ceda S for my birthday, love it, won't fire full length though even though it takes the mags

Yeah it's pretty cool, right? Glad you got one. Don't shoot your eye out!
Top

Hmmm.
You know, a PCP using nerf darts wouldn't even have to use that high of a pressure.

Added a front grip/charging handle (from a drill) this makes it soooo much better. Flip up iron sights, bit of foam on the cheek rest, and took the grip off and filled it with silicone cause it was loose. 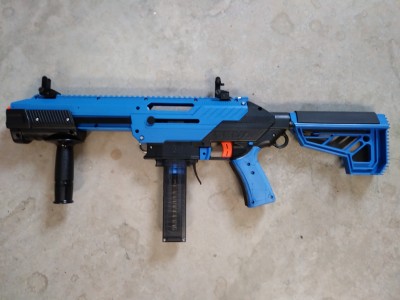 It would end up being REDONK overpowered and expensive to make. Only a fool would spend a lot of money making a device to launch foam darts. For some reason spending sinful amounts of money to launch food products is always encouraged though. Food over foam I guess. Let me know when I stop making sense. I'd just like to be aware of when that happens.
Top

All my attempts just ripped the darts apart, Nerf Rival is much better, the balls are much tougher.
Top
Post Reply
11 posts • Page 1 of 1