yeah, you're right.... if you have orings on both sides and you use cylindrical ammo you might as well use a mechanical linkage to push the round forward and fire it.... at that point the bolt would recoil and load the next round

I may have to try doing something like this when I'm home. The only issue I see is how to get the o-rings inside of the quick disconnect since there are no grooves or anything
"Some say his pet elephant is pink, and that he has no understanding of "PG rated forum". All we know is, he's called JSR. "
Top

Looks like the valveless principle was in use during the first world war, have a look at these Austro-Hungarian Mortars.


This mortar was original in that it didn't use explosives but pressurized air to propell the projectile. It used the so called System Spitz which meant that the projectile was loaded through a special breech at the bottom of the tube. During the time the bulbous air chamber was filled with pressurized air, the projectile was held in place using a sort of clutch, which was released when the pressure was correct (max 35 atmospheres) and the aiming was done. Then the projectile (4.5 kilos heavy, of which 1 kilo was explosives) was forced out, reaching a maximum range of some 1.100 meters.

Lobbing a 4.5kg projectile over a kilometre with 35 bar is certainly impressive performance... 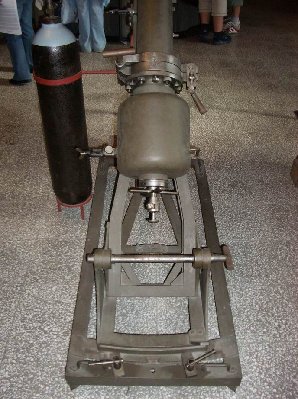 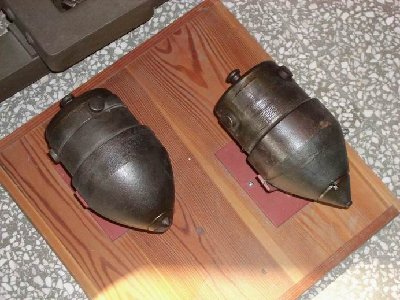 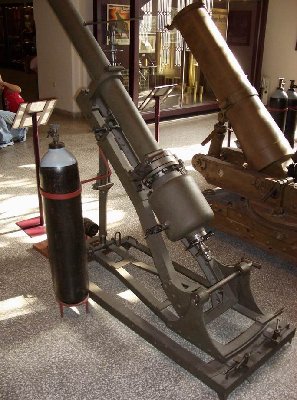 I wonder what sort of air source they were using to fill that monster to 35 bar....

EDIT: The pictures weren't there when I posted this..

Compressed gas cylinders are seen next to these in museum pictures. Apparently a 10.5cm mortar could be fired fifteen times from one.


I'm seeing reference to these air mortars variously using a clutch/gripper to hold the projectile against chamber pressure until firing and a breakable screw method involving a retaining screw breaking at X pressure to fire the round.


If you examine the bulbous pin at the bottom of the rounds in these pictures then consider that the bottom of the pressure chamber has some kind of wheel/screw arrangement I'd speculate there's a claw mechanism of some kind that gets released internally by the wheel under the chamber to let go of the shell.
Copperhead Prime: 14mm 240psi Bullpup Cannon
Copperhead Pocket Launcher: Ultra Compact Rocket Launcher
How To: Make a Stungun with a Disposable Flash Camera
Top


It was very simple in that the shell closed the top of the chamber and was retained by a "gripper" until the air pressure was deemed sufficient and the gripper was manually released, which fired the weapon.

I can conceive of a shearable bolt that would fail at a predetermined pressure (as used by the PAW 600, though that was in conjuntion with an explosive charge) or some sort of pop-off governed mechanism (pop-off actuates a piston which releases the projectile) though these would not result in an accurate firing time.

I'm curious about the studs on the projectile, my first thought was that they might engage rifling in the barrel (similar to theLa Hitte system) but they don't seem to project far enough.

I think the design in the patent that is the subject of this thread is a more elegant solution though, as the projecile is balanced and isn't under any strain (aside from air pressure, but that is also true of the mortar designs) until it is pushed forward for firing.

It seems the French were in on the act too, more details here. 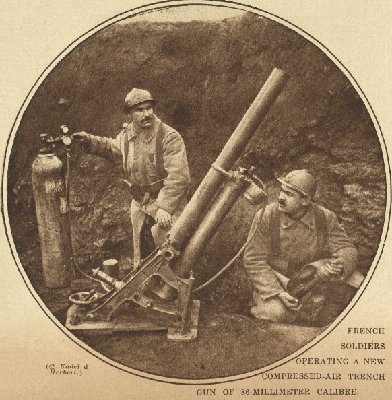 Found another patent for a valveless launcher from 1891: 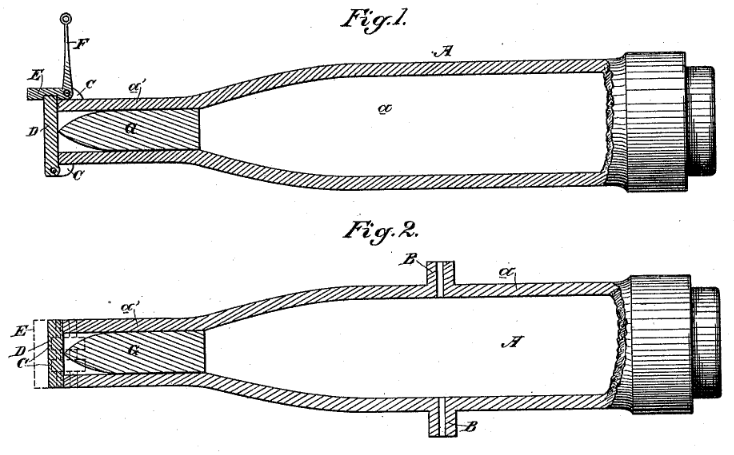