"In the world of spuds today"

Sometimes just the act of writing it down is enough to get started.


I only have an "existentialist" look at Jean P. Sartre, of my projects, a question that lacks "poetry", and this is bad because it resembles to the myth of Sisyphus. Maybe a full car hybrid ... too tall for me? perhaps...

You have already achieved many "holy grails" in the world of hybrids... full auto is probably within your grasp!

Just please don't point it in the wrong direction, it would be a great loss to the hobby.

A little teaser of what I've been playing with this past week, more details to follow over the next few days

Just playing with an antique

Thinking of assembling a steel bbs launcher, powered by a small jet engine of the compressed air-gas type.
Compressed air is not used directly to power the bbs. Before, it is introduced into a combustion chamber that burns the air mixture. butane, continuously, producing a jet of gases at very high speed, which is what would be used to drive the steel bbs.
The weapon is like in the video, the idea I mean, and the concept is like in the other video.
I have built a small engine of this type of reaction in the past, and the speed of the jet, with a convergent-divergent nozzle, is supersonic. The job is to be able to reliably turn the jet on and off, which can be done. It's actually a fusion of a hybrid with a full auto bbs launcher.
I imagine that the steel bbs, (so they do not burn), should be ejected at very high speed through the barrel.
For reference, my rc turbojet has a nozzle diameter, (sub-unique convergent), of 40 mm, and the exhaust gas velocity is about 900 km / h. With a fair length barrel, for example, you should propel a golf ball with good speed.

The power source. Observe how the nozzle of the albatross literally shoots soccer balls, tomatoes, packages of flour, and I don't know how many things other than these crazy insane, couple to the jet of the jet fighter.

What I think is that you can significantly increase the speed of the air coming out of the pressure tank, heating it. It's like an afterburner. The increase in flow velocity depends only, in general terms, on the initial and final temperature relationship.
For example, if the air leaves a tank at 7 bar, and has a speed of 120 m / s when expanding in the barrel, with a temperature of 20 ºC, Ti, (293ºK for the calculation because it is absolute temperature), and we heat that air with a fuel at 1500ºC, Tf, (1773ºK), as in a hybrid but continuously, the final speed will be the square root of Tf / Ti, which as a result gives 2.45. The speed of the superheated air would increase approximately in this percentage, 245%, about 294 m / s ... It works the same as an afterburner. For the rest, first idea, it is only necessary to interrupt the air outlet and combustion process with a trigger. It is somewhat of a hybrid because it uses compressed air and a fuel, and it could be a burst weapon.
The increment is as in the drawing, taken from a jet engine article. 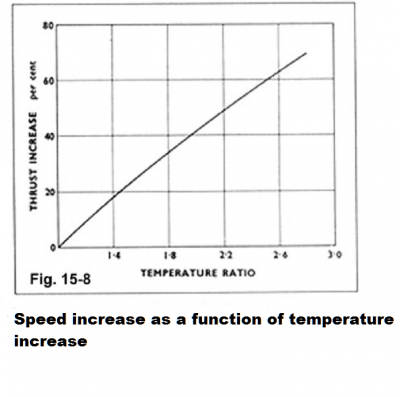 You... you want to hook up a BBMG to a jet engine?

So you would have the engine running continuously and redirect the flow into the BB chamber when you want to fire?

That thing is going to get hot though, I don't think epoxied fittings will last... will you be using commercial pipe and fittings?

I made several experiments in the past with high pressure air in the region of 55 bar, even with plastic airsoft BBs the results are brutal:

If I remember well pressure in a jet combustion chamber is more in the region of 10 bar, but I expect that would rise with the constriction of a chamber....

What I think, I mean to evaluate the possibility of this, is to use a superheater to accelerate the propellant fluid more than the pressure of the reservoir can do it for a given pressure.
In the tube of an afterburner, the pressure does not increase almost, only the speed of the air energized by temperature.
In my jet engine, for example, the air coming out of an electric ducted fan, at a not very high speed, is accelerated to twice that speed in the afterburner. This is the old video of my engine working with cold air, first and then with the burner on. When it is hot, the thrust increases to double, measured with a balance, and this is only due to the increase in speed because the mass flow that escapes through the nozzle is practically the same.
This type of motor is not practical to drive bbs, but it is a small rocket, which you can turn on and off at will, interrupting the air and fuel, and the question continues, and make it work by letting the fuel and combustion gases pass again and turning on the ignition.
I think of using a small air-powered rocket - butane.
The air source is a pressure tank and the fuel source is a small propane bottle, because I need more pressure to inject it into the combustion chamber.
What you have to achieve is to be able to ignite and extinguish the combustion, depending on whether or not you press the trigger. reliably. Of course, I can not paste anything and the system needs cooling, but that is more or less solved. Besides it has to be small and compact. I will draw a picture of what I think.
Here is my test, in this old video, but applied to an engine for an airplane.

The device looks more like a torch, something like what is in this video, but without the complication of using liquid fuel, because it is very difficult to pump it and handle it at will and quickly, the start and stop of combustion.

The gun trigger activates and deactivates the main valve and the ignition simultaneously. The flame holders are for the flame to anchor in that area because if there is not, everything can go out without control.
The device only gives more speed to the compressed air that comes out of the tank. The propane gas flow regulator adjusts the necessary amount, and the air flow regulator, I think it is not necessary. By simply varying the amount of gas and keeping the amount of air flowing per unit time constant, a stoichiometric mixing can be achieved.
The bbs, would be sucked by the gases that pass very fast through the nozzle. I don't know how hot the bbs will get, because the time it is exposed to intense heat is very short. This is a first approximation to the BBMAG afterburner.
The problem is that the speed of the air leaving the tank does not decrease, or decreases as little as possible. In the drawing, the increase in area and shape make the air slow down ...
I think that if the area is increased as little as possible and with a truncated cone subsonic diffuser shape, the losses would be less. Another problem is that it is quite difficult to maintain stable combustion if the air is traveling at high speed. The shape of the combustion chamber could be like this ...

Another factor that improves everything is the length of the chamber because it increases the time the air has to heat up. This is just a thought of mine, I don't know if it's practical or if it will work. Maybe in the future I will try, or I don't know.
Top

Very, very cool! I also like how your family seems willing to help with filming around devices that sound like they could explode at any moment

Is it possible that the pressure generated inside the combustion chamber blocks the flow of fuel though, if you have a continuous burn?

If you close the throat of the ejection nozzle a lot, it can happen. Very hot air has less density than the cold air that enters, and you have to calculate the area of ​​the nozzle for that density and the flow rate of the system. If this is okay, there is no flow throttling.
Variable geometry nozzles are for this. When only the turbojet works, the air comes out cooler, about 800 ºC, and the nozzle closes a little. When you turn on the afterburner, the air comes out warmer, about 1500ºC and the nozzle opens to adjust the area to density.
Apart from this, in the truncated cone diffuser, the air speed decreases as the area increases towards the largest part, and this allows to have more pressure there, by Bernoulli, and this transformation of speed into pressure, has its losses . The diffuser cone degrees are around 8 to 10º, to avoid these losses. All this always assuming that the incoming air is of subsonic speed. It is exactly a small ramjet.
It is a very noisy device, the tests were filmed by a friend, and they were carried out when no one is home. At that time it was the terror of all the dogs in the area! jajajajaja

I think he is more injured than the target he shot. 85,000 psi is definitely not for me. Good video, although I don't wish anyone this, but good video, anyway

Apparently it was a "hot" loaded round, he was very lucky that one of those lugs didn't kill him.

jackssmirkingrevenge wrote: ↑
Sun May 09, 2021 8:53 am
Apparently it was a "hot" loaded round, he was very lucky that one of those lugs didn't kill him.

That's what he thought, but there was a bit more going on. The sabot material was building up in the barrel, and the signs where there, he did say the shots were going off target and the recoil felt different.