I plan to make just such a pneumatics. There won't be much of a rock, 20-40 atm, depending on the diameter of the pump rod. Perhaps the pump handle will play the role of fits. I know that this is not the most effective scheme, but it must be done. 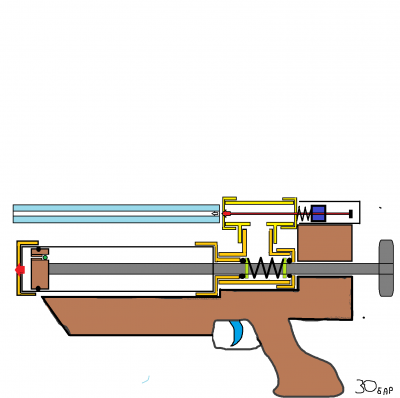 Ideas about a two-stage compression pump with a force lever would be useful ...

keks2033 wrote:I know that this is not the most effective scheme

If you have to pull to pressurize, it's really not comfortable at all. For a pump you want to be pushing against a hard surface, especially if you don't have the benefit of a lever.

Slightly related, have a look at clide's minipump. Here's a cool flash animation he made, click on the commands in the top right of the screen to go through the steps.

I could not see the animation. It seems that I'm going to have to unsubscribe this old PC ...

The article with photos, I like it. Interesting construction.

An example of the Crosman "Rocket Spear Sea Gun" came up for sale locally, were it a different economic climate I would have contemplated purchasing it but alas, these are difficult times and choices must be made

It did however persuade me to do some more digging and I found the patent. In operation, a gas cartridge 40 is positioned in the housing 38 and the thrust member 49 is threaded inwardly so as to force the neck of the cartridge against the gasket 42 and the piercing pin 35. This pierces the cartridge 40 but the gasket 42 seals and surrounds the puncture to prevent the escape of gas rearwardly in the housing 38. The elongated spear is then inserted in the muzzle end of the barrel 14 until the sear 58 snaps into the annular groove 96 of the spear. The member 72 now completely surrounds the portion 22 of the valve body and the O-ring 78 prevents the escape of gas between the valve body and the spear.
The housing 38 is then threaded rearwardly slightly to disengage the seat 48 from the gasket 36 and to withdraw the piercing projection 35 from the cartridge. The gas now escapes from the cartridge 40 through the annular space between the housing and the portion 28 of body 20, the radial port 34, and the elongated bore 33, against the rear faces of the piston valve 92 and of spool 85 in the projectile.

The gas pressure forces the piston valve off its seat and the piston valve 92 and the spool 85 move forward against the resistance of the coil spring 80. During this forward travel of the piston 92, the water in the hollow projectile in front of the spool 85 is forced through the bore 68 and out of the hole 70 in the plug 62. The forward movement of the spool continues until the forward face of the valve rod 89 engages the plug 62 and covers the rear opening of the passage 68. In this position, the valve rod 89 closes the rear end of the bore 63 and prevents any escape of gas through the hole 70. The valve rod also acts as a stop for the forward movement of the piston 92.

After the elapse of a few seconds, when the pressure has reached the desired amount, the housing 38 is threaded forwardly relative to the valve body 20 thus seating the surface 48 of the housing against the gasket 36 on the valve body, thereby preventing any further escape of gas from the cartridge 40.

The gun is now ready for firing. When a fish or mammal or other target is seen, the gun is fired by pulling the trigger 52 against the pressure of the spring 59, thereby pulling the trigger sear 58 out of the annular groove 96 of the spear. The pressure of the gas in the barrel and in the chamber of the tube 60 propels the elongated spear from the gun. After the spear has left the gun, the gas which is still in the interior of the tube 60 expands through the rear opening thereof, thereby giving the projectile an additional reactionary propelling force.