Harness the power of precision mixtures of pressurized flammable vapor. Safety first! These are advanced potato guns - not for the beginner.
Post Reply
20 posts

I get it. They are similar but different things.
I compare compressed air weapons with model airplanes and firearms with large aircraft where a pilot or a lot more people can sit. I'm interested in the two ...

PD This "I'm interested both" is a word forbidden by these sides!

This design to reduce the energy needed to open the "C" exhaust port is possible.
"A" and "B" are connected to the main check valve and to the cleaning valve of the combustion chamber, and "D" is the ignition. The camera on the right is to achieve the necessary mixing volume, (especially at low "X").
The regulation process is the same that I am using but, it consumes much less energy because it needs less strength and the spring may be weaker 8) 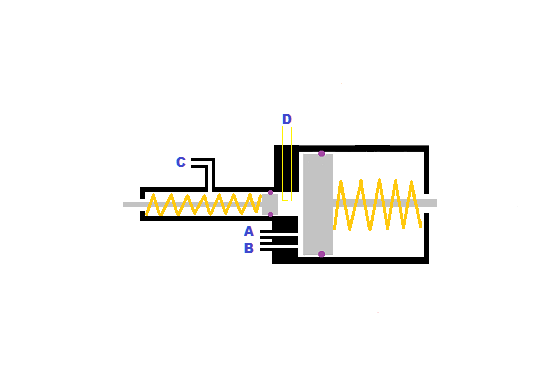 I have tried to include an o'ring to retain the ammunition and optimize the use of gas pressure, and it has worked very well.
I'm shooting to test, with a 14.5 cm gun, and the result is more power.
Soon, I will build the new combustion chamber, with the design drawn above, to get more energy. This is the way to go, work on the power, because the control aspect, electropneumatic is working as expected.
Ideas don't make holes, guns do!
Top

I built this ammunition loading system, and I've tried it. It works only with the addition of a ball and a spring in the system, to allow the passage of a single spherical ammunition 5.5 mm. Otherwise, two or three enter and lock.
My explanation is like in the diagram. It is impossible to stack in balance two or more spherical balls (1). In (2), the balls are as they should be, but when the spring of the tube where the bbs are lodged makes force (3), the ball inside the barrel moves to the left because it can not do it the other way, and two bbs to the barrel (4).
I have added a hold so that the ball that is going to be fired, can not go to the left, and so it works correctly, firing only from a bbs.
Apparently, after the explosion, there is an intense depression inside the barrel that is what "sucks" the ball that does not have to etrar yet. The gases have mass and when they are accelerated, when leaving the tube, inertia is what causes suction. This contributes to entering two or more bbs, when only one must enter.
I leave a couple of diagrams of how it looks. I used a short-fire gun for tests, because the regulation of everything varies. This system, in my opinion, lacks the flexibility to adapt to the variations of the different shots, in terms of power. Of 20 shots, it was locked in 4, by small variations in the mixture of the hybrid. It is understandable because it is a thing done in the house with few things. The other system, which is shown in the video, being its drive independent of the combustion pressure, fits perfectly. In 50 shots none fail!

Another problem is that he mistreats the ammunition a lot. I am shooting with lead bbs and the violence of the actions that occur within the system, the lines and deforms ... The system that I am using in the video, treats them much better.
I will continue with the system I am using, I will only add the o`ring retention, and the needle to gently press the bb against the o`ring. The pneumatic actuator that drives it will be redimensioned to optimize the consumption of compressed air and will be longitudinally aligned so that it does not disturb. 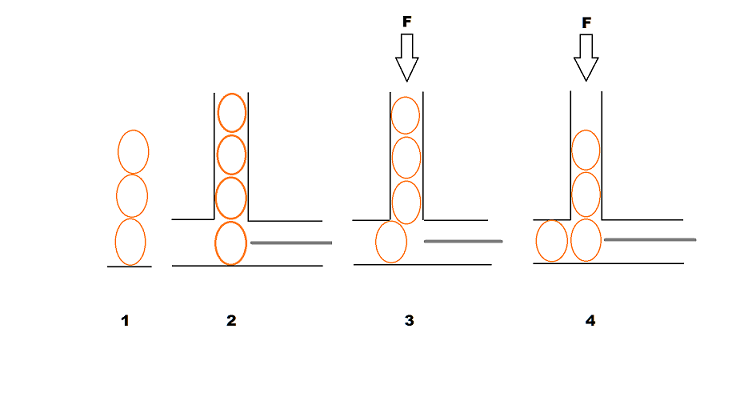 Speaking of the theory, here, I think that the issue of the use of the maximum pressure peak in the combustion chamber of the hybrid, is solved.
With an excessive adjustment in the bb's retention o`ring, the pressure is not enough to eject the bb by the firing barrel, being logical to deduce simply, that adjusted just below this, the system uses the available energy without problems .
I calculate by eye, that I was wasting 30 -40%, without the retention system.
As for the energy expenditure of the mainspring of the combustion chamber, apparently, there is not much energy consumed. Mechanical work being the product of the force exerted by the displacement, I see that most of the force to compress the spring is made by the compressed air of the air pump or the air reservoir. It is responsible for moving the piston and compressing the spring by 90%. When the explosion occurs, the displacement is only 2 mm, no more. Mechanical work is not much, although I am trying to calculate how much exactly.
I think it takes a not very large portion of the internal energy of the gas, this small displacement of the piston, so it should not be a problem. I suppose that any system with piston, takes a more or less similar portion. This is for any weapon with the spring piston system, which is the one I use in my weapons.