Building or modifying BB, Airsoft, and Pellet type of guns. Show off your custom designs, find tips and other discussion. Target practice only!
Post Reply
33 posts

hectmarr wrote:On the left goes the air pump yes? and go through the small channel?

Yes, it's important to have a pin filling in the port in order to reduce dead volume as much as possible and not limit the maximum pressure and pump efficiency.


Another question. How much pressure do you have to shoot, under normal conditions?

These sort of rifles typically operate between 1000-2000 psi.

Chamber body done in the meantime: 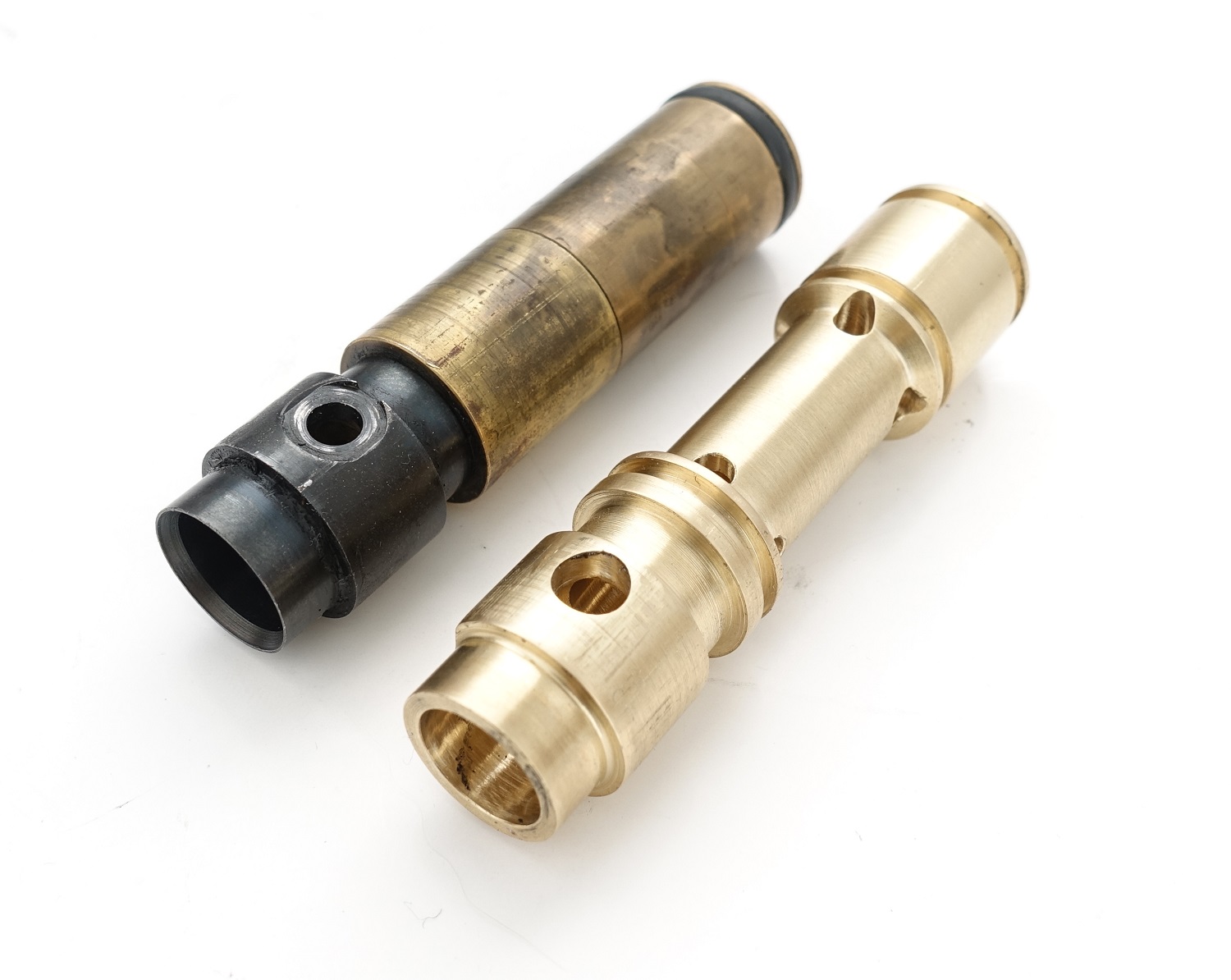 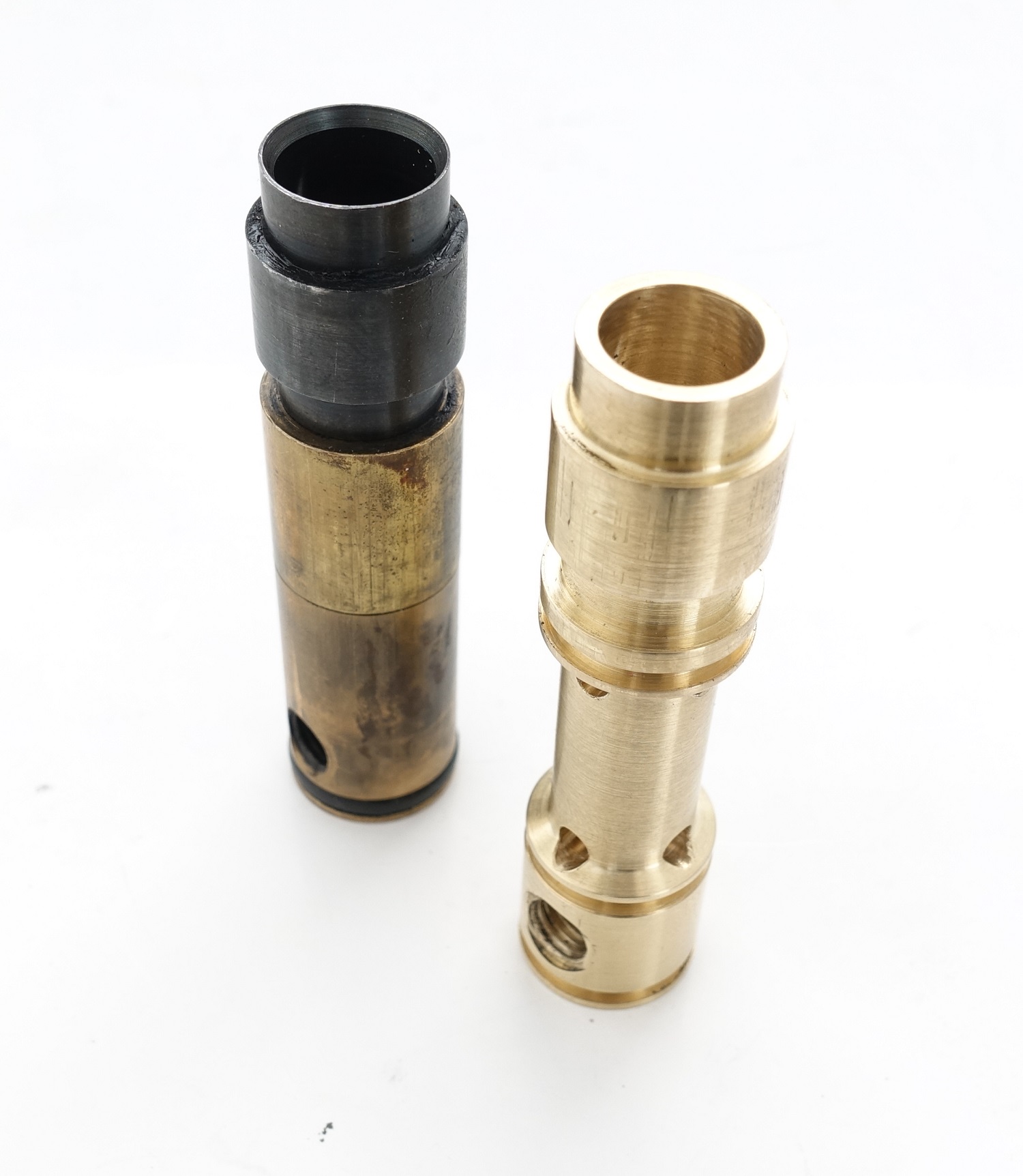 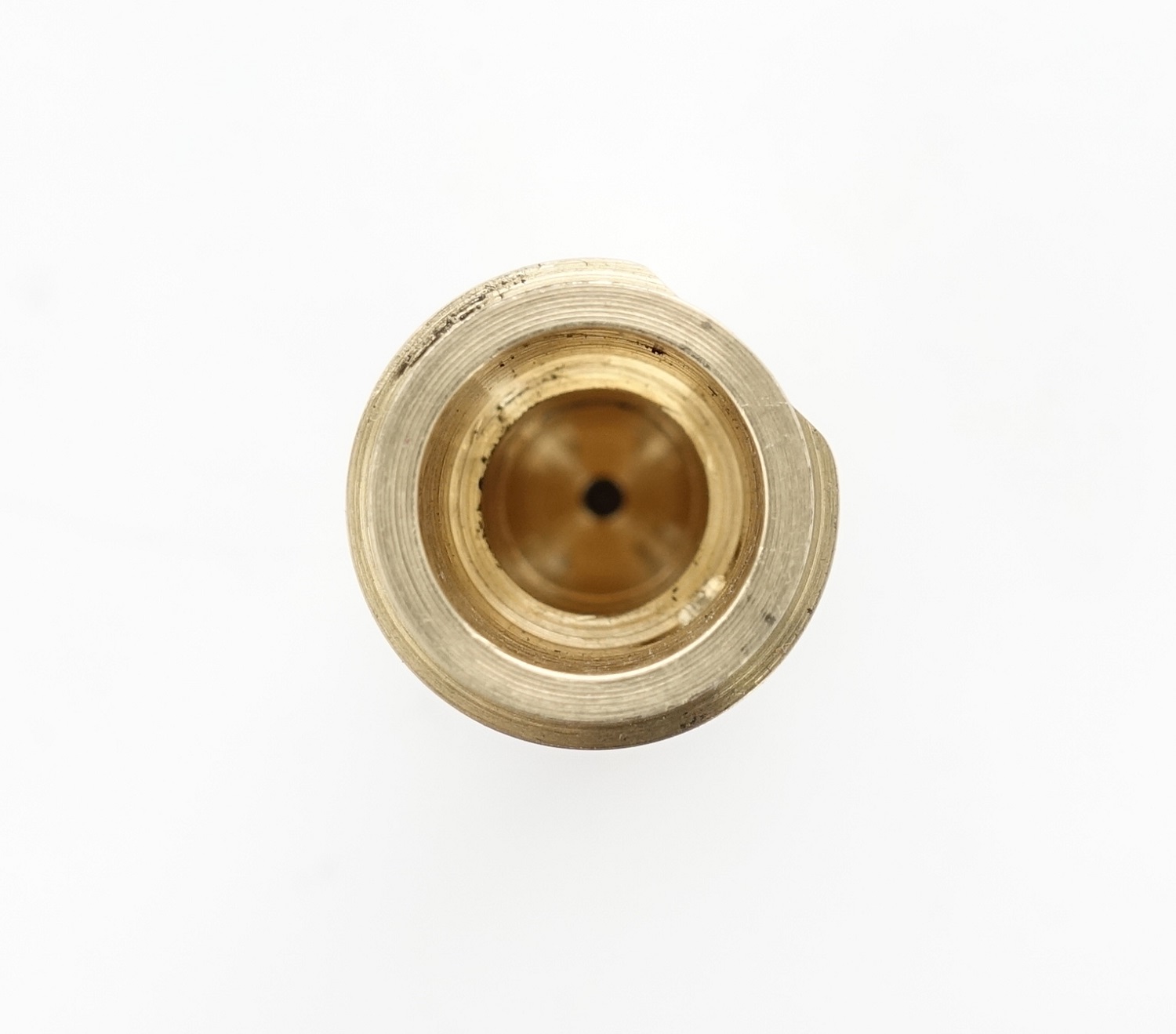 Quite a lot of pressure accumulates this type of weapon. I am interested in the design of the air pump, to apply it in my things. It would be useful to know the volume of air involved in each shot, and how many strokes are needed to achieve, say, 1500 psi. Your work looks very neat. I was looking for some of this information on the web, but I found almost nothing.
This type of weapon, (simplified), could be my first self-constructed weapon of compressed air.
Are you going to install this valve on your weapon?
Ideas don't make holes. The weapons yes!

hectmarr wrote:I was looking for some of this information on the web, but I found almost nothing.

You can find some data online, here is one example fitted with a gauge for testing:

Here is the pump data: 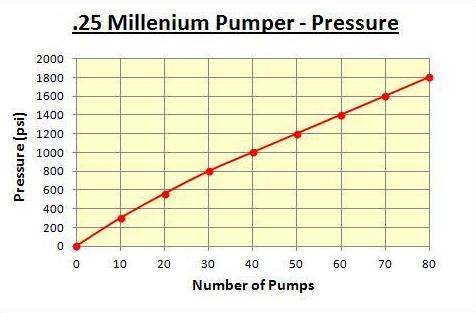 The pump inner diameter should be around 16mm and the chamber volume is about 28mL.


Are you going to install this valve on your weapon?

Yes, I just need to make the piston and it will be ready for some testing

Good data Thanks for the info and I hope to see the tests soon, it is very interesting for me.

Some more progress for today: 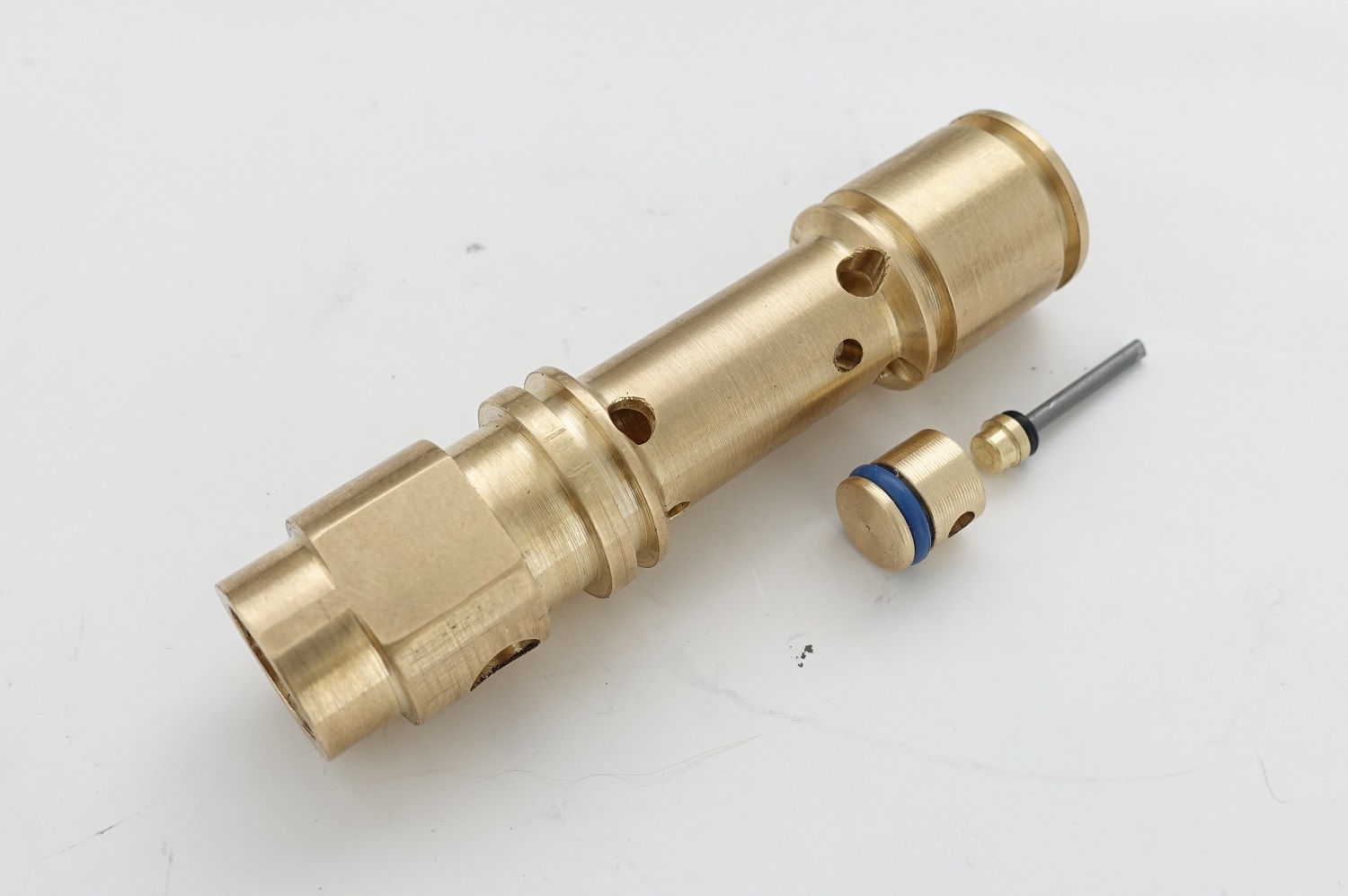 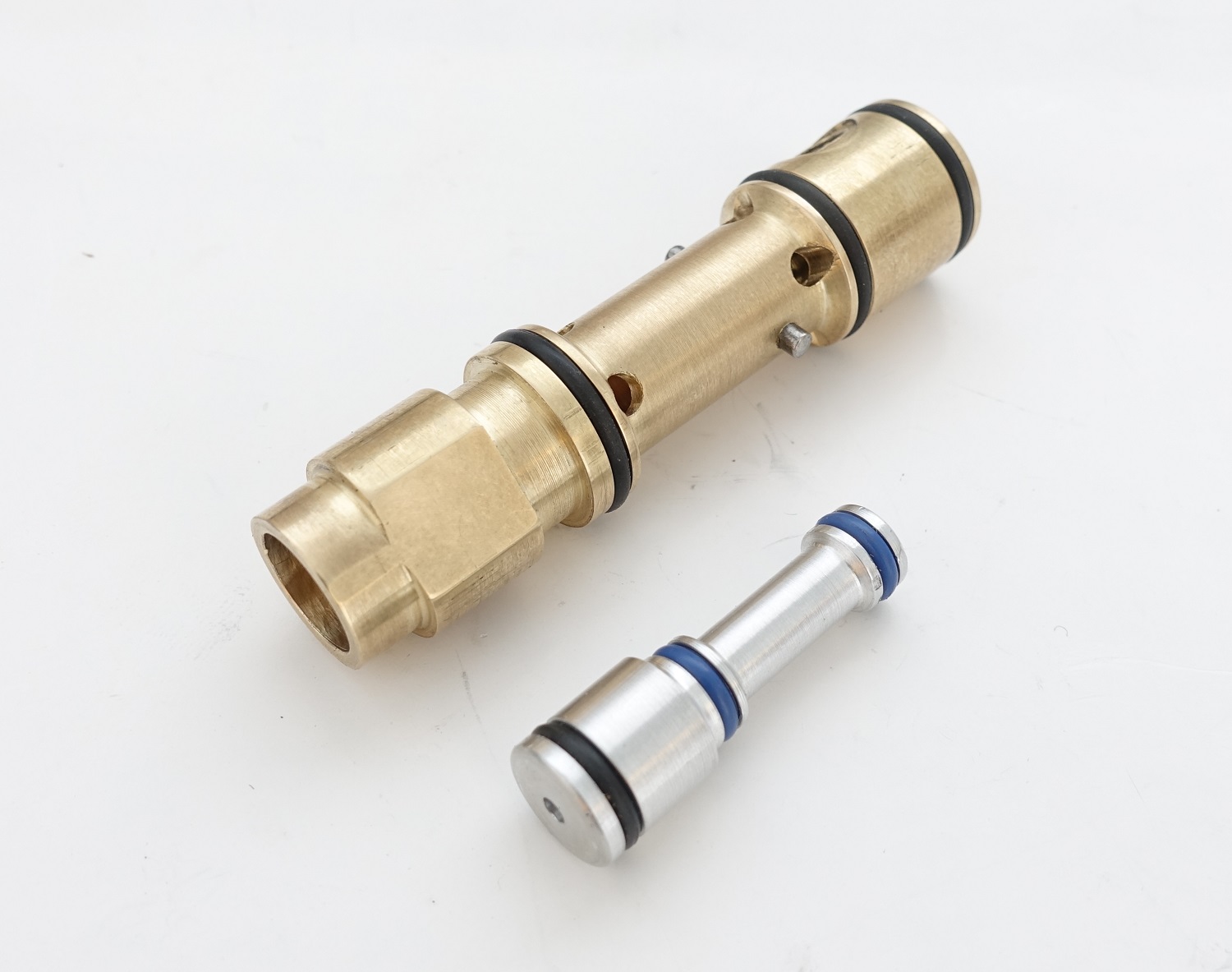 Assembled it to test but it seems that the pump head is not holding air at all, probably why it wasn't holding air in the first place...

What difference do the blue o'ring and the black one have?
Ideas don't make holes. The weapons yes!

It can be your wrestling name

Don't worry about asking questions, if I minded answering them I would have never joined this forum!

There is absolutely no difference between the o-rings, I just have a massive inventory of o-rings from a bunch of different sources and pick the ones that fit the best.

I made a new pump rod, here it is compared to the original: 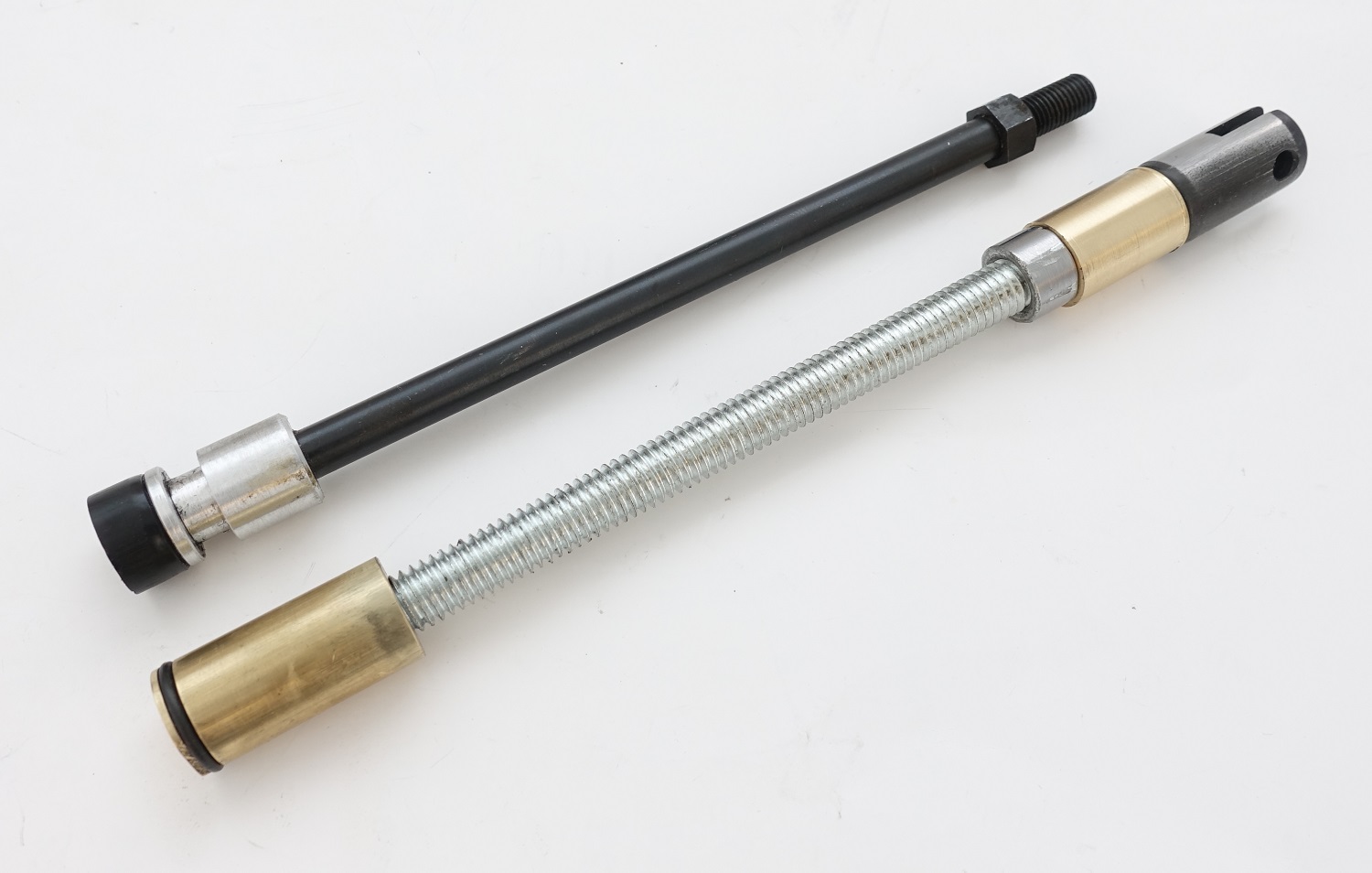 The original link is threaded for 5/16-24 which I did not have to hand so I made a brass adapter to allow the use of a 3/16-18 rod. As shown the seal end is 5/8" diameter, same as the pump tube ID, and it was binding so I turned it down by 1mm and this solved the issue.

Now that I had a way to pressurize I was able to do some testing. The first thing that I found out is that I had very much underestimated the unbalance required to shift the piston. With a 19/64" to 5/16" diameter, even with 5 pumps the piston stayed put even without anything holding it in place because the pressure imbalance was less than the o-ring friction. This imbalance represents around 27% of the force from the original cup piston.

I therefore increased the larger diameter to 21/64" and made a new piston, this time the imbalance represents around 50% of the original. With this new piston, a single pump stroke was sufficient to move it without it being held in place.

With the trigger assembled however, the return spring (part #10 here) alone will keep the piston from moving until 4-5 pump strokes are applied.

Here are the 8000 fps segments in gif form for clarity:

At 5 pumps, the piston opens and re-seats normally

At 10 pumps however, the return spring attempts to re-seat the piston while is still being blown by the escaping air, resulting in the edge of the o-ring jamming against the edge of the second step diameter.

Naturally I want to be able to go to 10 pumps and more, so this issue needs to be solved.

I did some velocity testing this morning and the results are a little disappointing.

The best result was at 16 pumps, I got 690 feet per second with 14.3 grain Crosman hollowpoints, while an example with the standard valve tuned up was able to achieve just over 800 fps with the same projectile and number of pumps.

That being said, the concept works and trigger pull is still light at 16 pumps when 10 seems to be the recommended maximum for the stock rifle.

There's clearly a lot of things that can be optimized, particularly around the piston area to prevent the o-ring from snagging on the edge of the transfer port when re-seating. I can also revisit the o-ring spacing to have closer limits, so the seal is broken almost as soon as the piston starts to move.

Another point is that beyond drilling out the barrel port to 0.170" I haven't really touched the barrel and bolt area in terms of increasing the available flow, so as ever, watch this space.

I see you were busy. The air pump was very good, despite the problems that remain to be solved.
Ideas don't make holes. The weapons yes!

I'm thinking this might be the solution, setting the o-ring deeper so that it never travels past the transfer port: 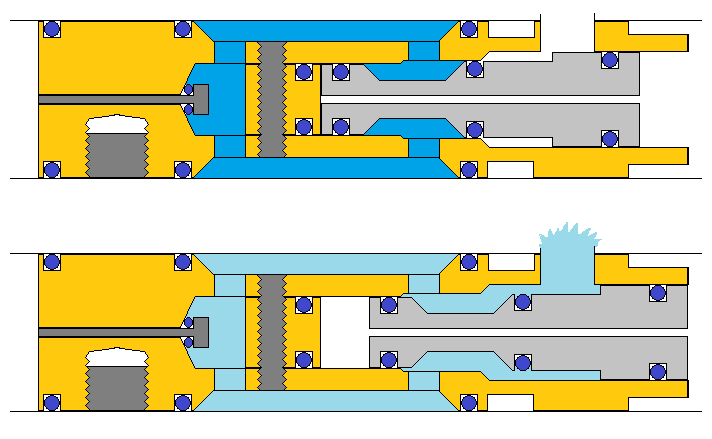 It is a good solution, even more, if the transfer port is large with respect to the diameter of the o'ring.
Ami gives me good results this system of passing the o'ring through the transfer hole, in my piston chambers for hybrids, because the hole is 4 or 5 mm and the o'ring 28 - 30 mm. When the hole is well polished and with the chamfered edge, it works. In your case, you have a larger transfer hole, calculated by the images of about 8 or 10 mm ??

The transfer port is 5mm in my case. I tried the modification in the last drawing and it was even worse, the o-ring is completely blown out of its groove even at lower pressures.

Someone on another forum suggested Back-up Rings which would be an interesting option. For now however I am trying to have an o-ring in a groove instead of on the piston, where the hope is that the pressure will tend to keep the o-ring seated: 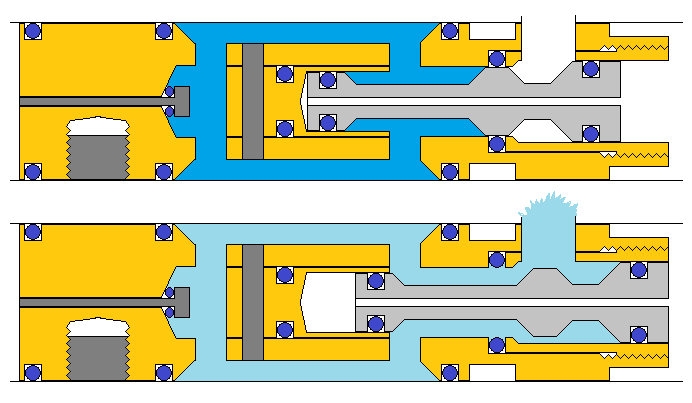 I do not believe that the o'ring comes out, if it is, as you drew, housed in the body of the valve and not in the piston. You have to try it. I should be excelling very little, it's my opinion

I tried out the o-ring in the chamber design and what an adventure. 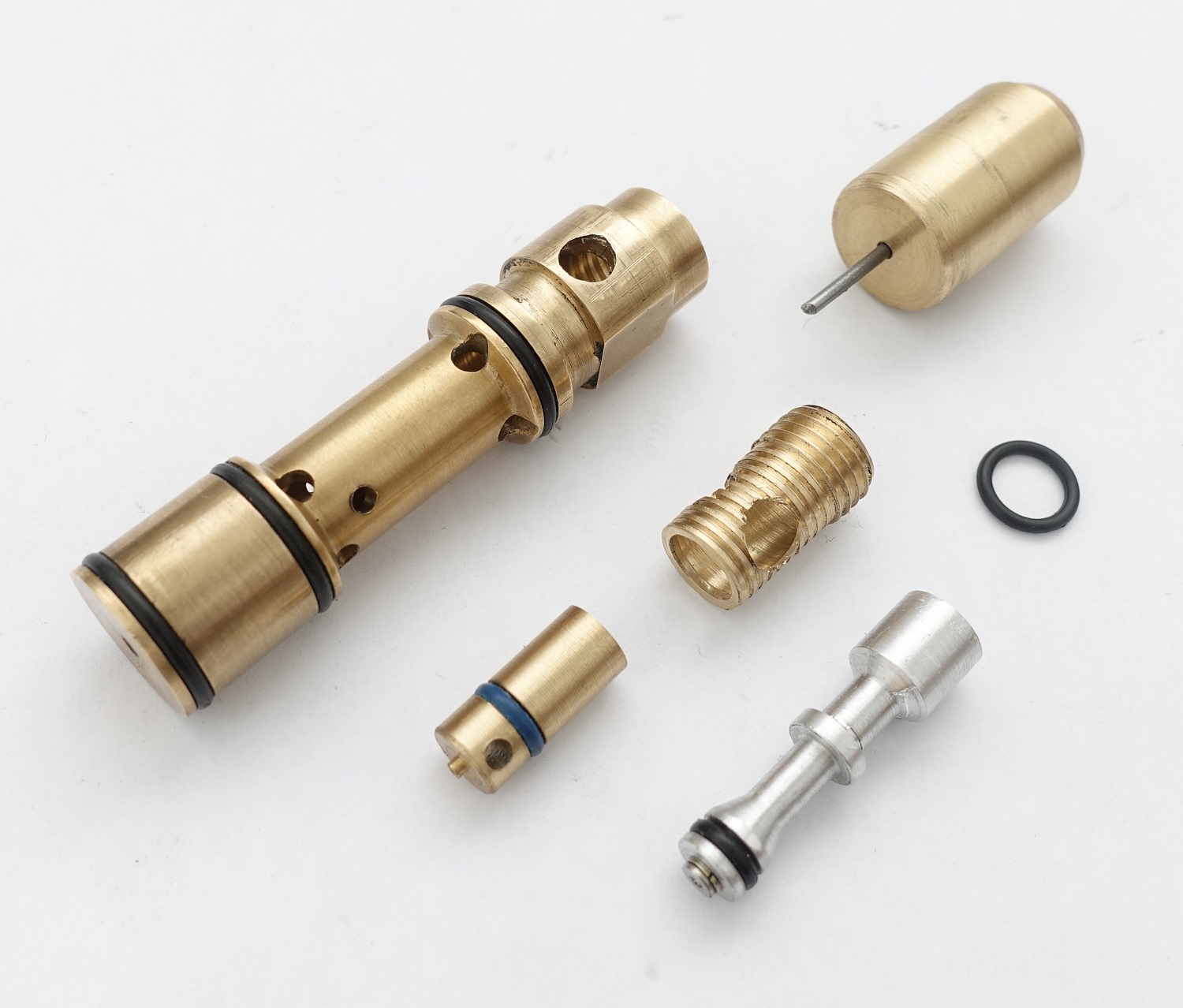 Turns out to be a lot more susceptible to friction, I tightened the screw part until the o-ring was squeezed enough not to leak, and after that the piston wouldn't budge, even at 15 pumps.

This left me with the problem of a pressurized chamber, hence the quick tool you can see on the top right in order to let the air out via the check valve.

Of course this turned it into a de facto hammer valve, launching the rod I was using to push it out of the tube with considerable haste. Fortunately I had it pointed in a safe direction