Agitator for a BBMG

Building or modifying BB, Airsoft, and Pellet type of guns. Show off your custom designs, find tips and other discussion. Target practice only!
Post Reply
5 posts • Page 1 of 1

Hello all,
Would there be any reason to add an "agitator"- a device to manually circulate the BBs in a BBMG? I'm thinking about an electric motor driven agitator similar to those found in some paintball hoppers. I believe in normal operation of a cloud style BBMG, the pressurized air provides the agitation, and in an inline vortex, a spring assists with ammo feeding, but I'm wondering about this alternative possibility to assist with ammo feeding and potentially minimize jams. Has this been done before?
Top

It's something I've often pondered but never actually made.

Here are some very old (2004!) concept drawings, at the time I was interested not only in reliable feed but also having a way top control the rate of fire as well as reducing wasted air. 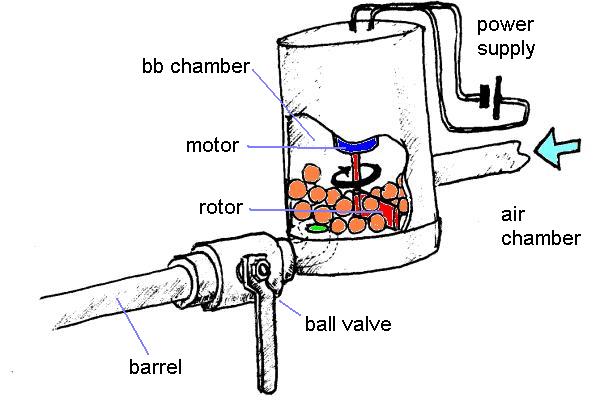 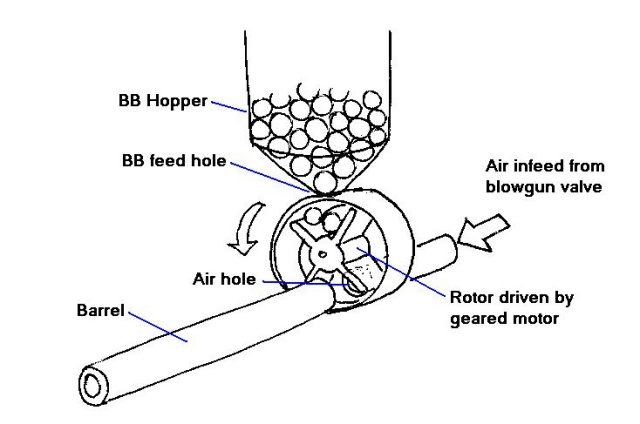 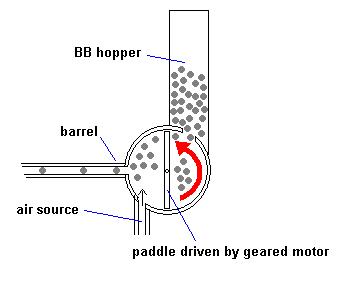 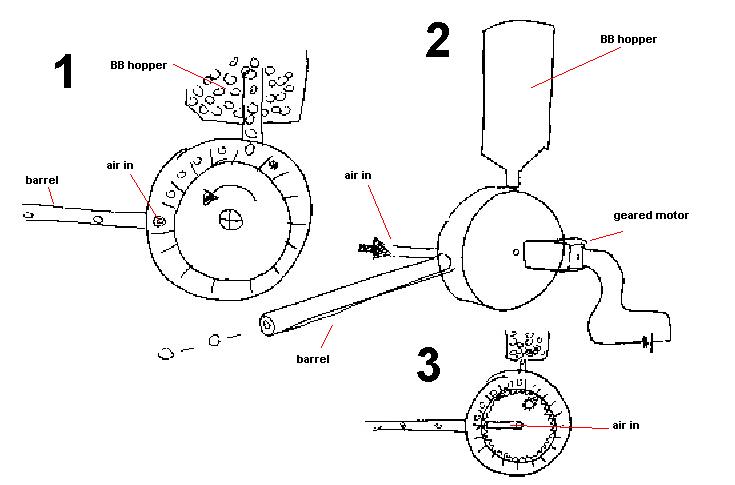 I love the last sketch and have a story for you. My dad built a design just about identical to it. The idea was to pick up BBs from the hopper and feed them into the breech one at at a time. The wheel was scalloped rather than paddled but worked just the same. The flow of inlet air was to impinge on the empty scallops to provide rotational power in similar fashion to a water wheel. When he finished it he brought it over to my place because I had a bigger compressor. Well, you'll be happy to hear the idea is not without merit. It worked!!! It fired about 6 BBs as it spun up to around 20,000 rpm (much too fast to give the BBs time to divert into the breech) then wrecked the spindle shaft (I don't think it had bearings, but then we weren't expecting it to go gyroscopic). Once the spindle holes went out-of-round the feed wheel thrashed and crashed about inside the casing and the thing was thoroughly junked as it puked a small cloud of burnt oil. I encouraged my dad to try again with the addition of a friction braking device to put a little drag on the wheel to limit the rpm, but he was just too disheartened as he had spent considerable effort machining the device. From that time he left bbmg development to me and focused on low pressure, high volume air rifles, which he did really well with.
Top

That's pretty much why electric drive makes sense in this case, anyone who's used a shop blowgun to spin something up will know that it's way too much...

My dad was nearly 80 yrs old at the time and wasn't so much into youtube, however he spent thousands of hours operating high speed air tools which I think is the biggest reason he kicked himself so hard. The thing sounded like a die grinder while it ran and wound up too fast to get off the trigger in time to save it. The other stupid thing we did was going straight way to full power for testing. Had we started at say, 20psi and worked up incrementally we would've learned a lot more and had a chance to make modifications before it blew up. It was a hard lesson for both of us.
Top
Post Reply
5 posts • Page 1 of 1