Building or modifying BB, Airsoft, and Pellet type of guns. Show off your custom designs, find tips and other discussion. Target practice only!
Post Reply
30 posts

Here's something a little unusual that I acquired a while back, it took me some time to play with it as I needed to make an adapter for a new chamber and it's only recently that I was able to cut non-standard threads on the lathe. I bought this one without any accessories and with an air reservoir that was in a poor state, with corrosion visible internally and a few crush marks too. For that reason an adapter was made to enable a 9oz CO2 bottle to be used as a reservoir.

Here's a little video overview including some action shots:

Here is the cane assembled along with the adapter and bottle: 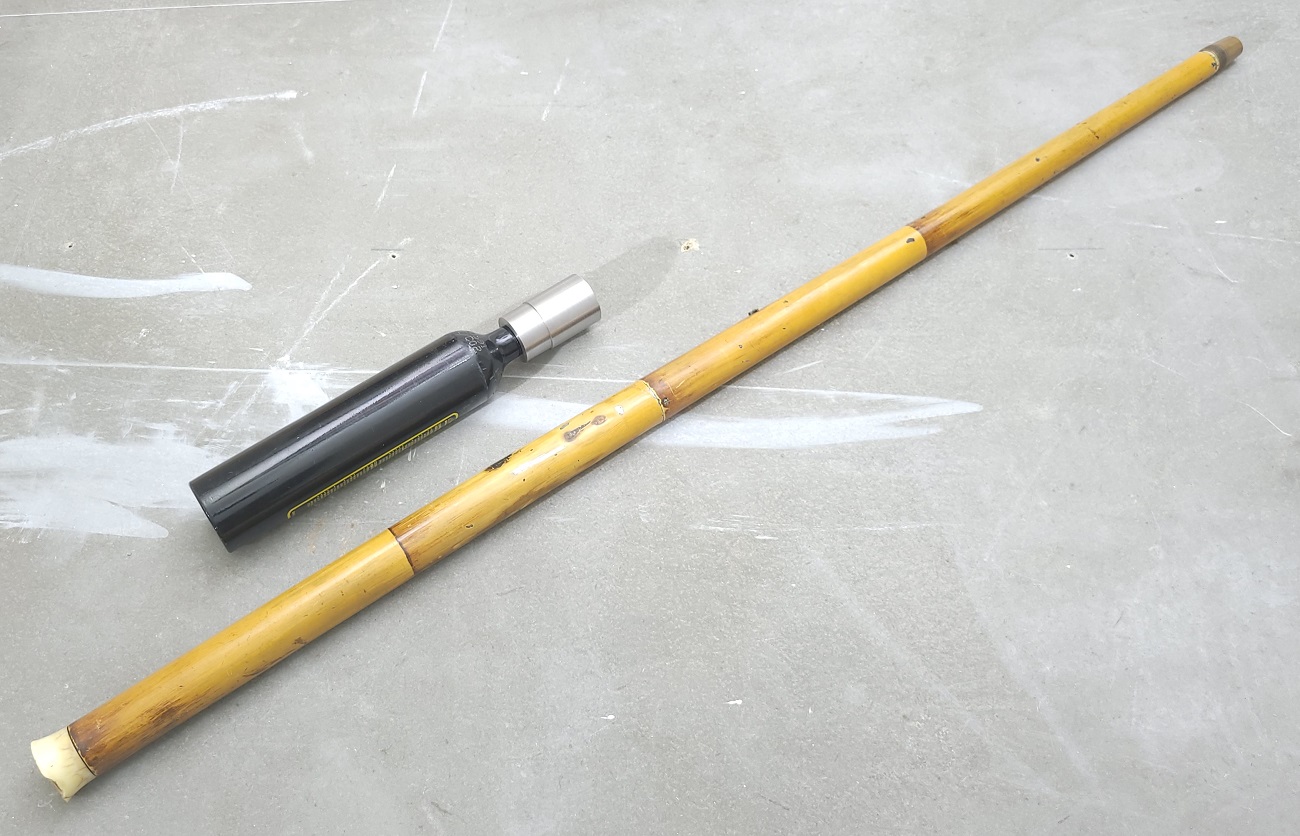 The separation between chamber and barrel is roughly at the center and is marked by the middle part of the painted "bamboo" finish which is rather well done. 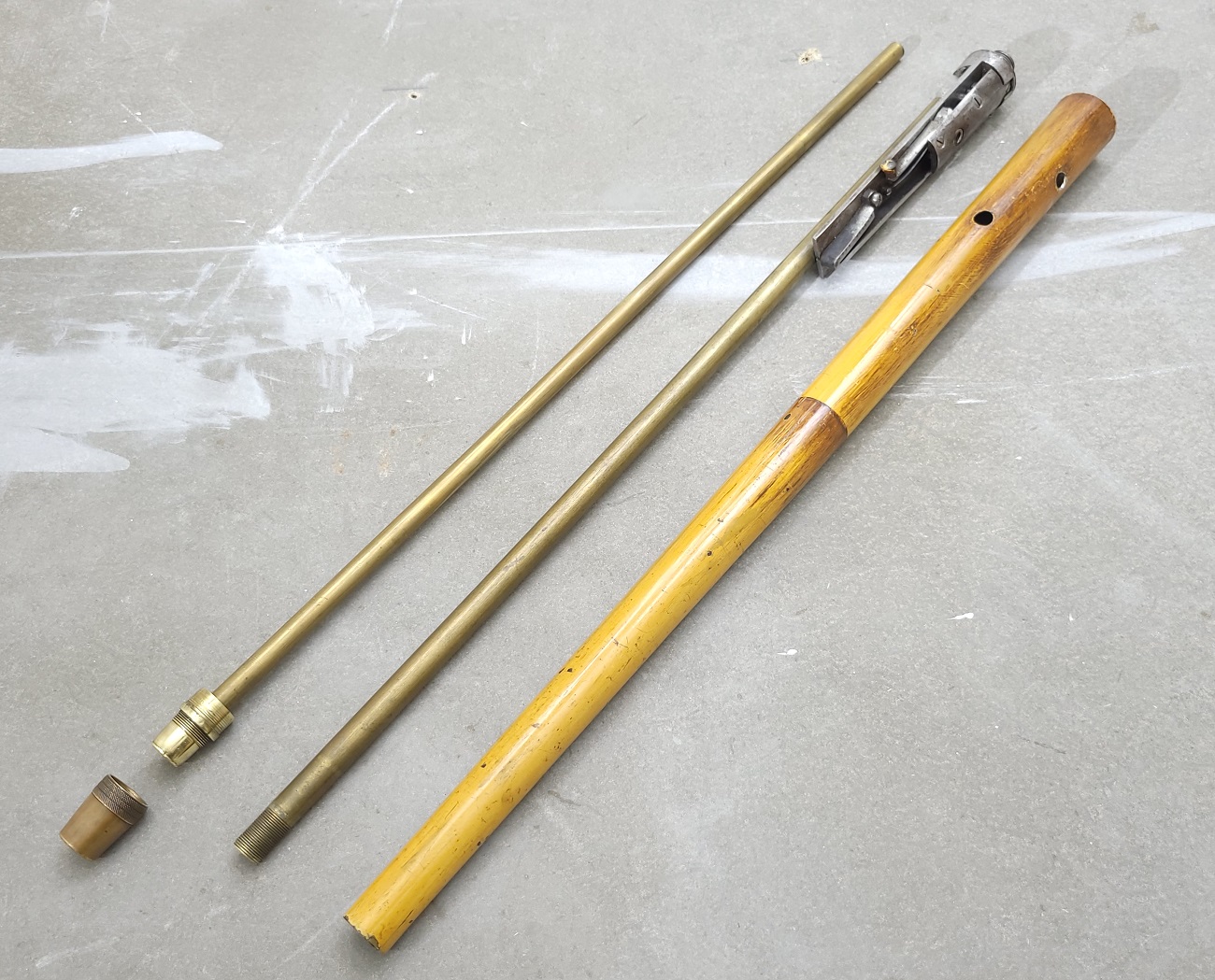 Here's what's inside the barrel section, there is a lock mechanism connected to an outer tube into which a rifled brass liner is inserted. The rifling appears to be pressed rather than cut, and an odd choice to even rifle it in the first place given that these were mostly used with round balls and there wasn't really a way to aim it with any precision. 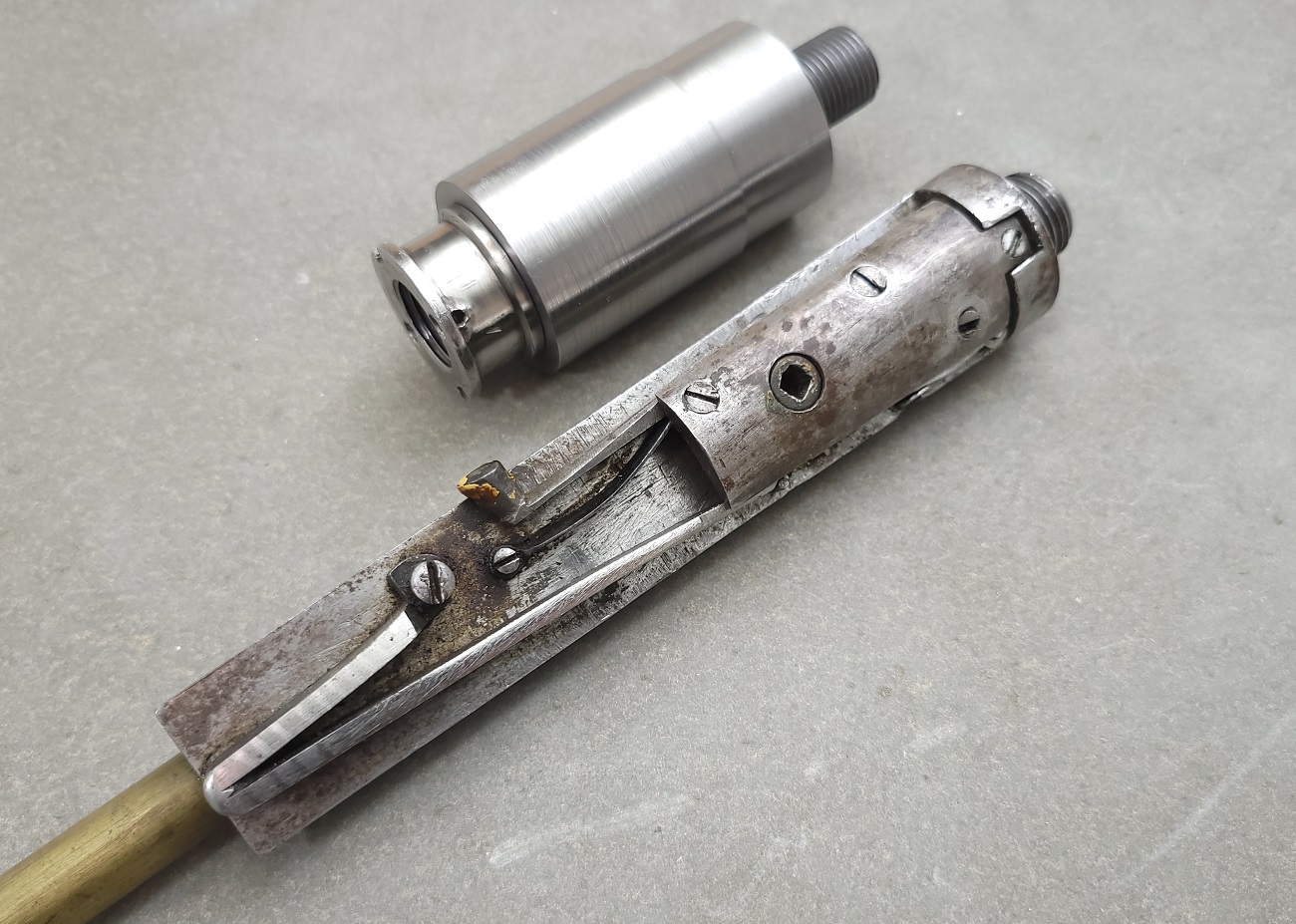 Close-up of the lock mechanism and adapter. I could not find any maker's marks anywhere, however the design is typical of the air canes made and sold by James Townsend of Birmingham est. 1845. 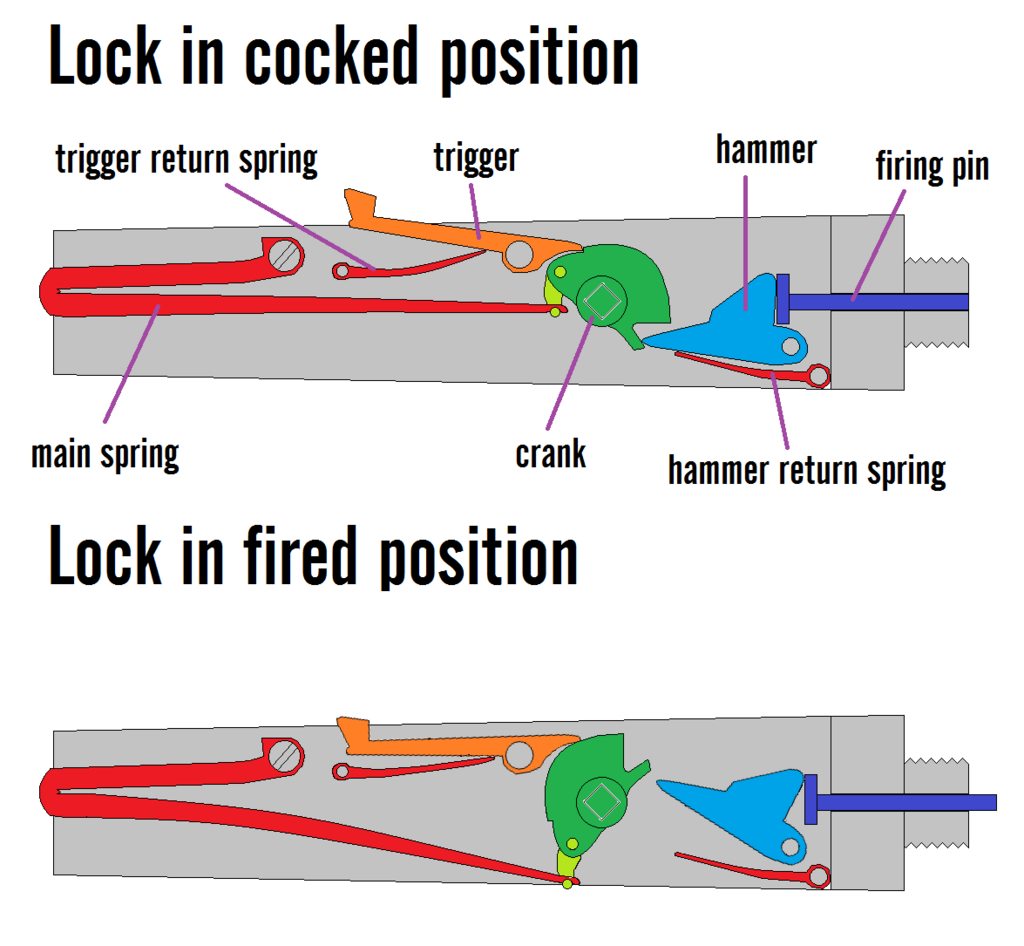 Here is a diagram roughly to scale of the lock, the crank is rotated clockwise to cock the mechanism until it is caught by the trigger.

When the trigger is pressed, the crank is released and is rotated quickly anti-clockwise by the main spring, striking the hammer which transfers the movement to the firing pin that opens the valve. 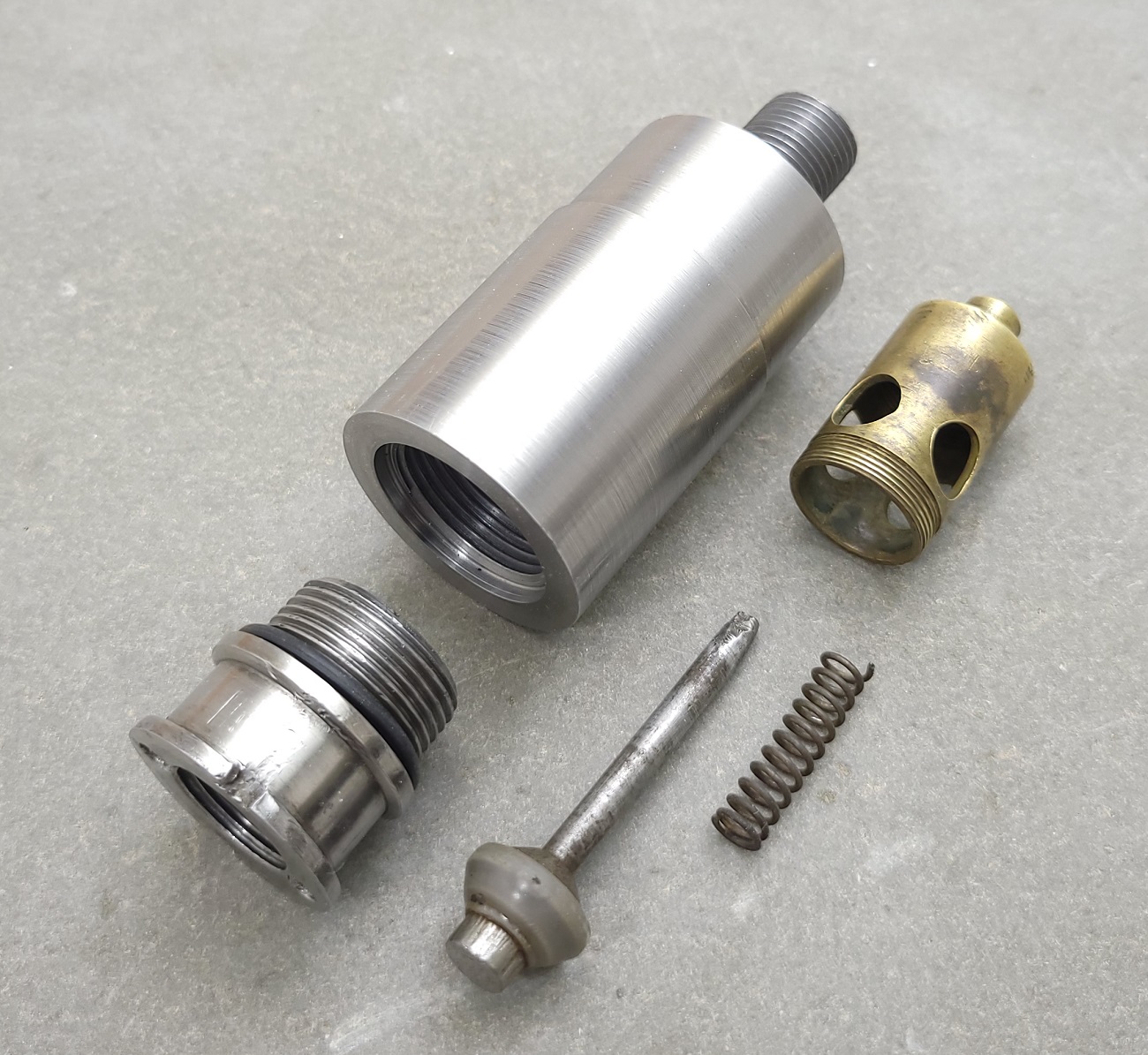 Detail of the internals of the valve, of note is the original animal horn seal that just needed a little polishing and sealed perfectly.

The adapter was machined from C12L14 steel. 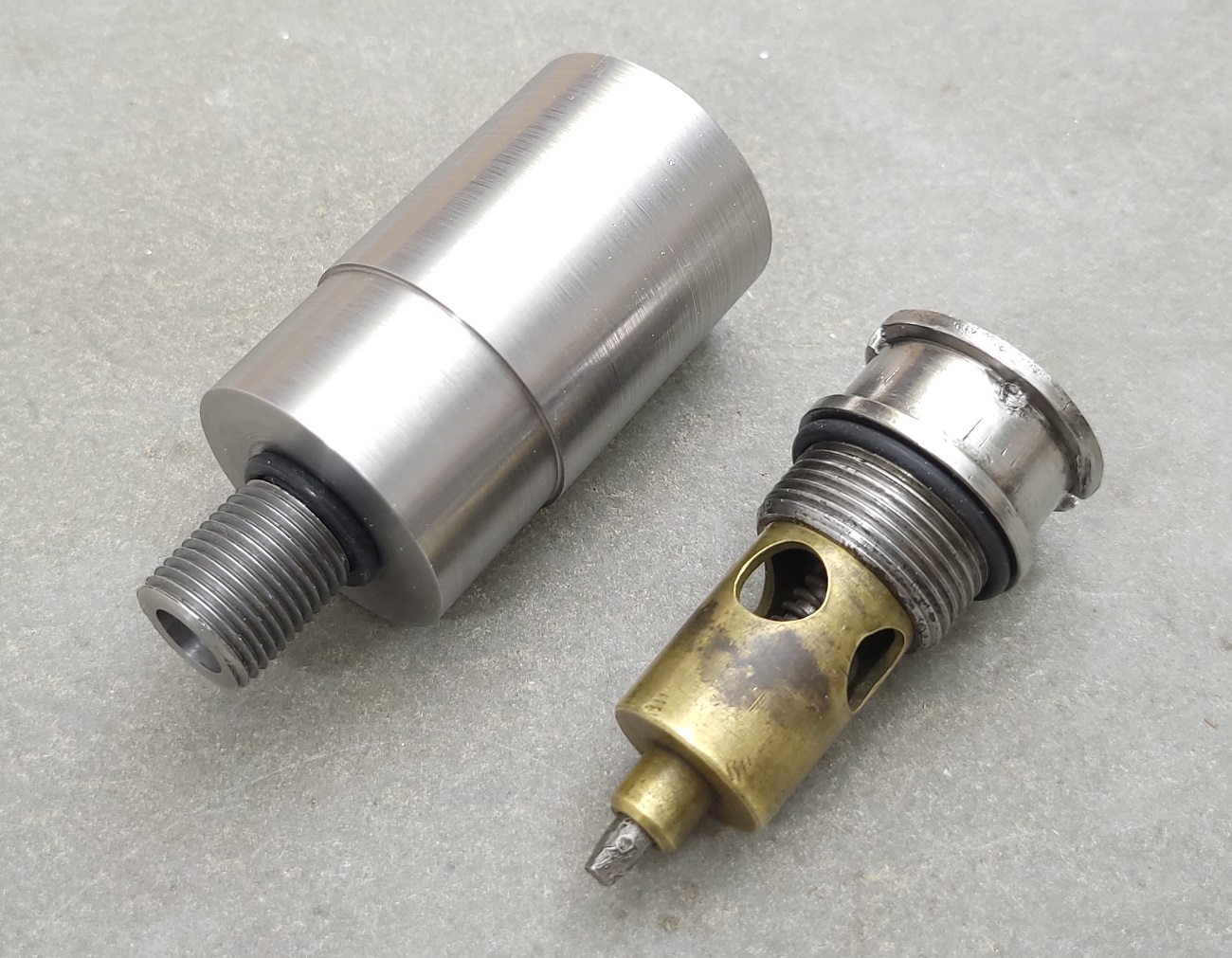 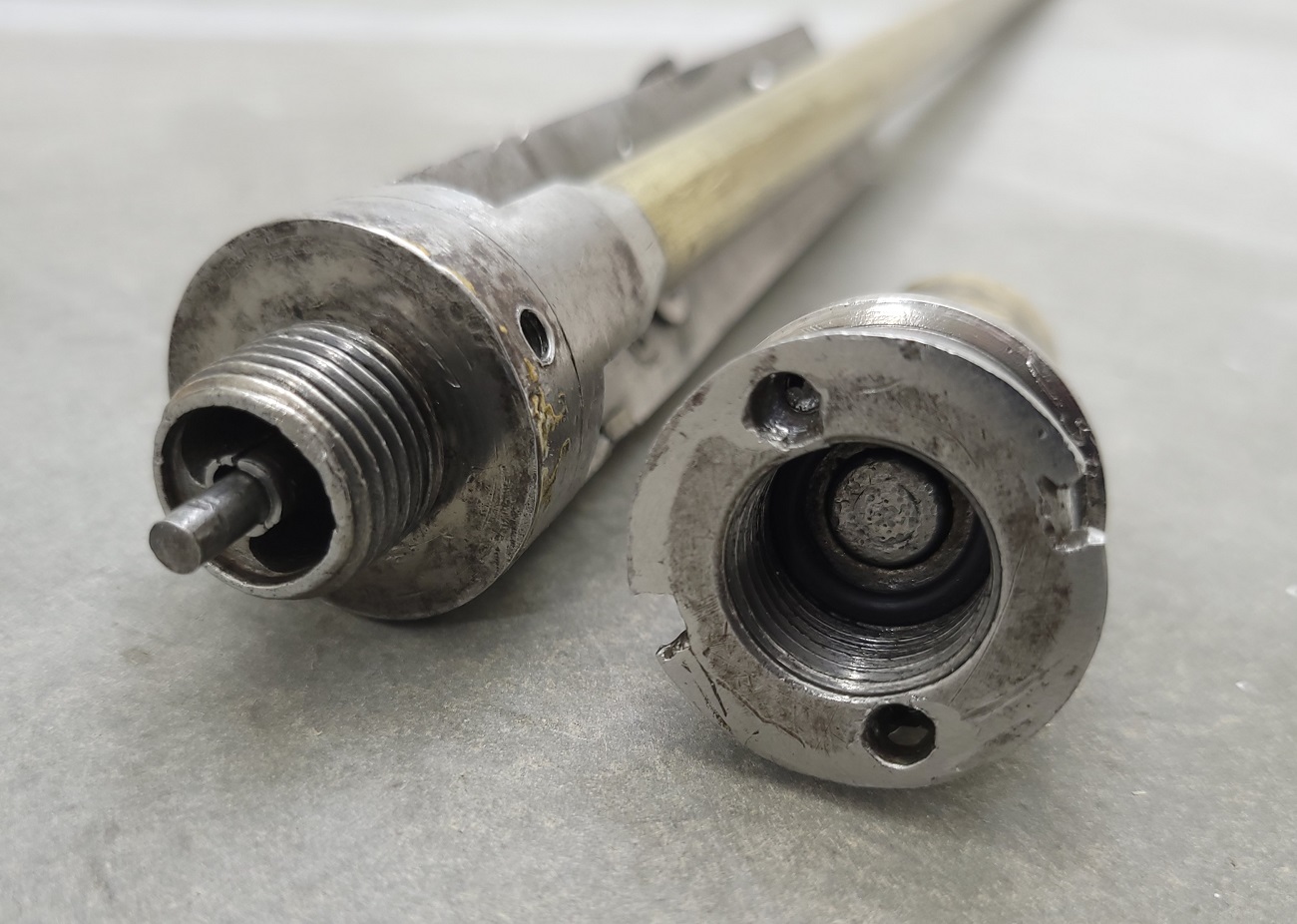 Detail of the connecting faces of barrel and chamber assembly. Note that there is some damage to the firing pin housing that would allow some air to escape while firing and probably interferes with the proper striking of the valve, however I made no attempt to repair it. 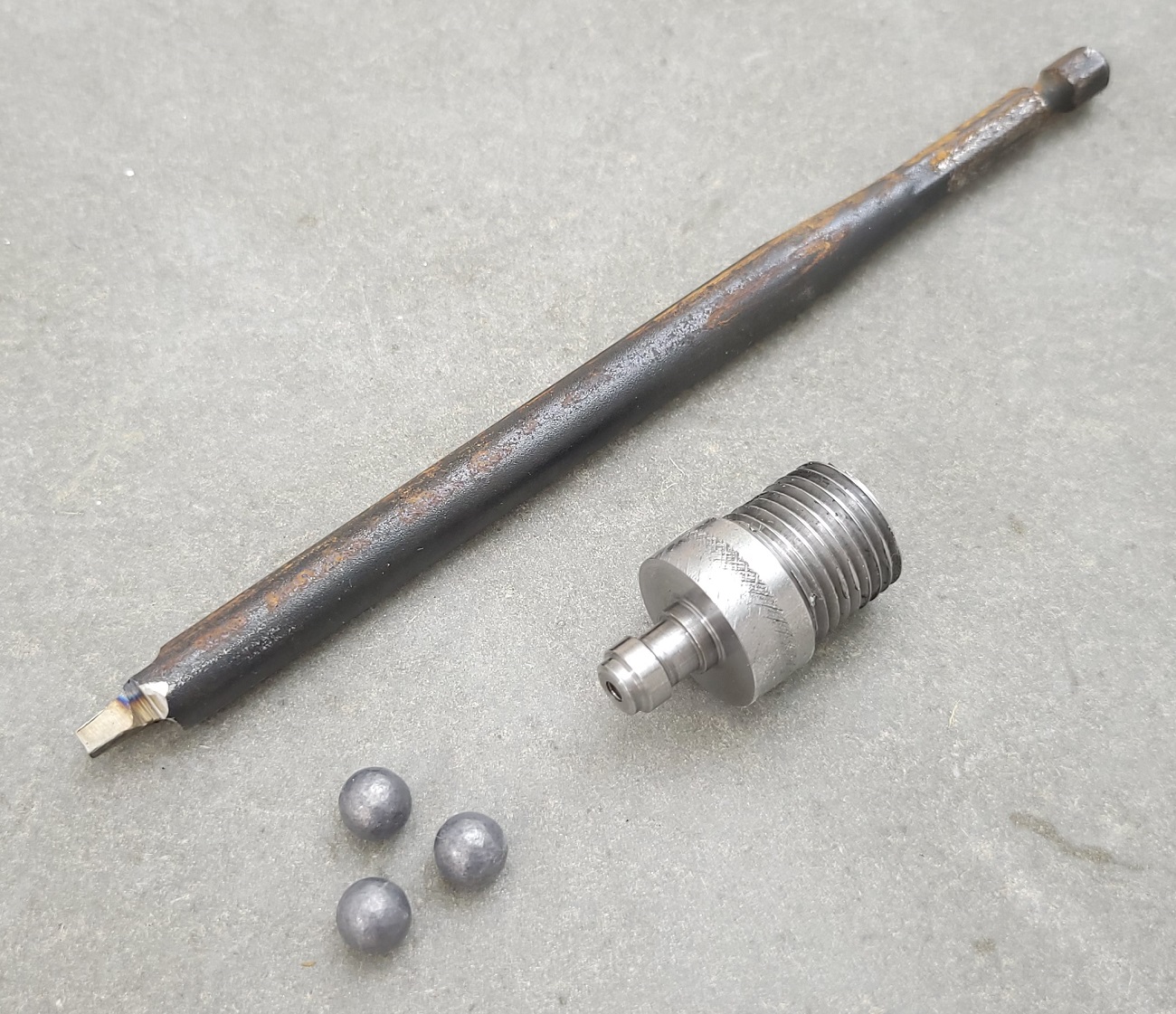 In terms of performance, I have to admit I expected more.

Above 850 psi or so the valve simply won't open, below that it's extremely sensitive to how much the barrel assembly is screwed into the valve body.

If it's tightened as far as it can go (not too much or it opens the valve), then it will give a short sharp burst of air and the ball comes out with very little velocity, and won't even pierce the bottom of a soup can.

If on the other hand a 1mm gap or so is left between the two faces, the valve is blown wide open and it virtually empties the reservoir.

You can see this happen in the slow motion video where the first can is picked up by the airflow and yeeted at full hilt downrange.

I suspect it should be performing better and it's down to the fact that the firing pin housing is in less than perfect condition. I might consider a future repair but for the time being it was a lot of fun with something that was made well before my grandparents were born.

Beautiful stick that shoots! It amazes me that it is from the mid-19th century, and it still works, with the repairs and adaptation that you did. It is a pcp from 1860!
On the other hand, I hardly saw it, I thought about making one for my grandmother, so that when they want to steal it on the street, I use it at close range ...

When you look at it you can see the similarity to a percussion lock, it really is quite fascinating and an interesting bit of history.


On the other hand, I hardly saw it, I thought about making one for my grandmother, so that when they want to steal it on the street, I use it at close range ...

Well, I'm going to drop my black humor mouth. I'm actually going to build two of these to give to my father-in-law and mother-in-law, once the gift is delivered, I will lock the door to the room, maybe we'll get lucky!

Sorry to go to the sewers, and divert the topic of the publication a bit.

Nice!
That mainspring certainly is the "folded from a piece of spring steel" kind from percussion and flintlocks. Absolutely beautiful and amazing it still works today compared to modern springs from only a few decades ago.

How finely have you tried adjusting the distance between the barrel and valve body?
Top

Beautiful work. This thing is cool. The spacing issue between faces reminds me of the headspace of a rifle; it has to be just right. I like it.
Top

No need to apologize, I'm here for the humor as much as I am for the ballistics

mark.f wrote: ↑
Thu Feb 25, 2021 7:22 pm
How finely have you tried adjusting the distance between the barrel and valve body?

The problem struck me while looking at the photos, if you look at this one you can make out that the head of the valve stem is actually proud of the base of the thread. I figured that after more than a century the seal had deformed allowing it to come to rest further than it was supposed to.

I made a new valve stem with a Delrin seal to rectify the issue, here it is next to the old one: 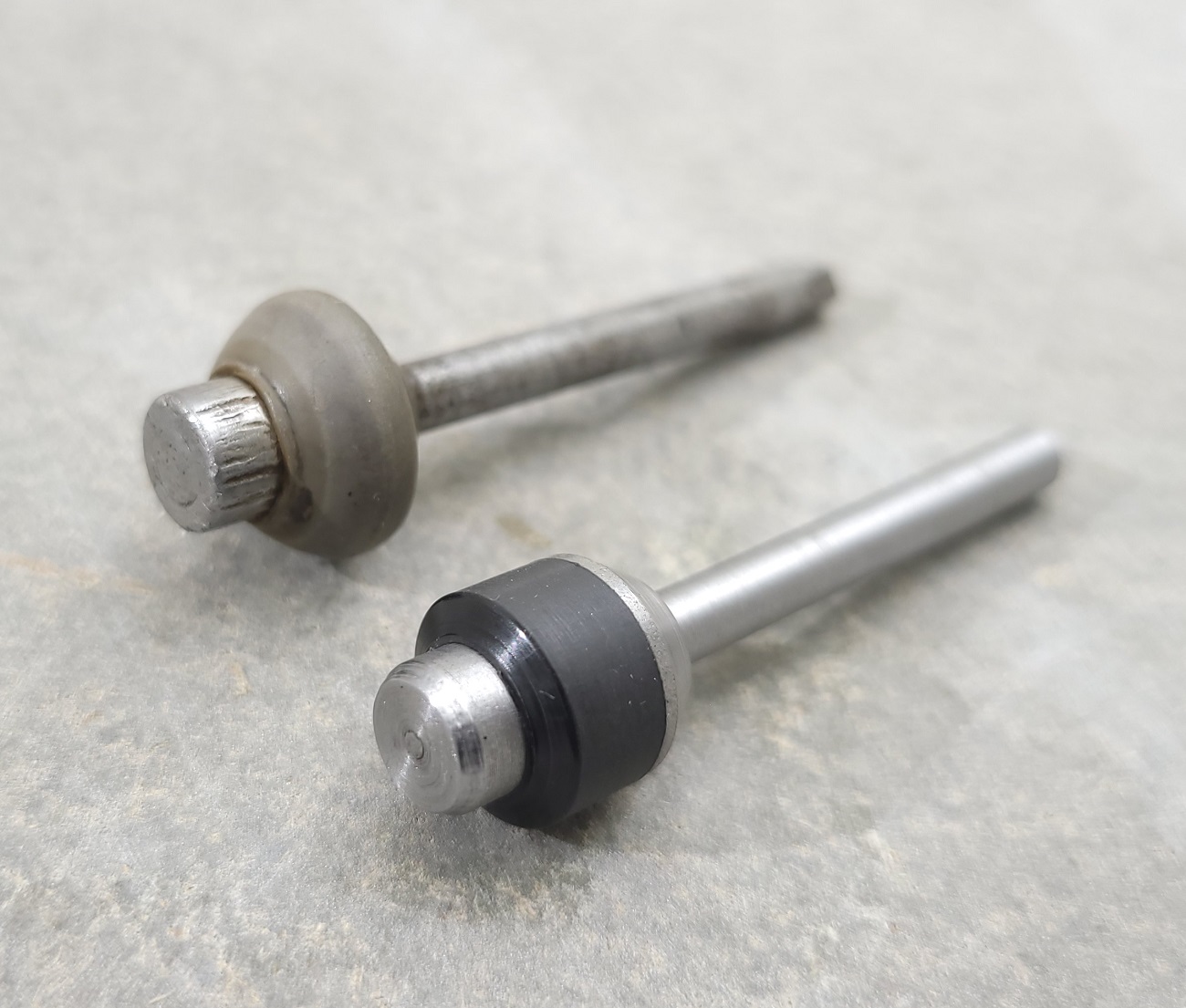 Installed in the valve body you can see that it's slightly recessed at rest: 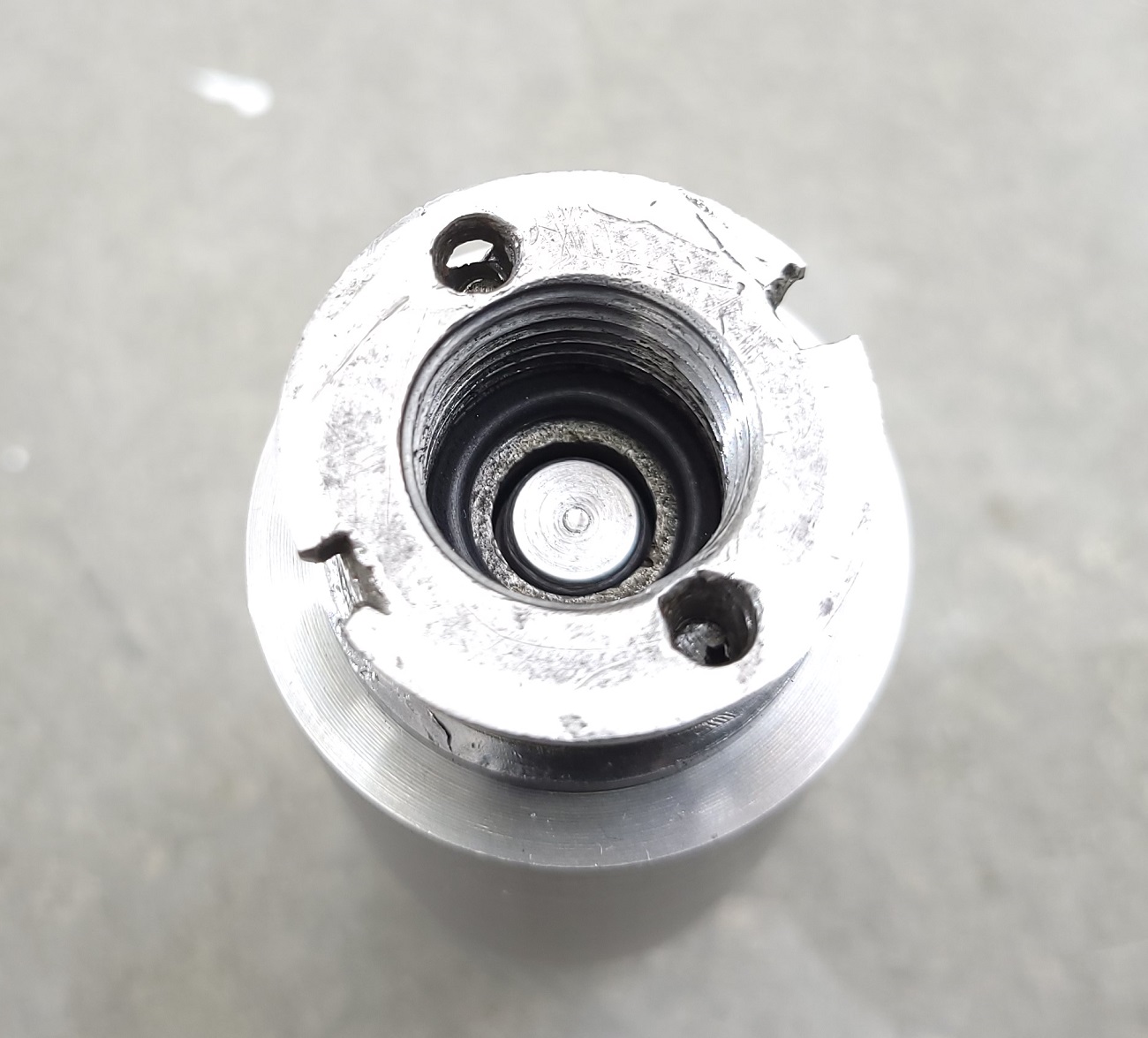 I did some testing and what a difference, completely different animal!

Pumped it to 1000 psi just to see what it would do and while the valve opened, it took a few shots before it even pushed the ball out of the barrel.

When I eventually got it to fire I ran some shots over the chrono and it was laughable:

Took it down to 600 psi and the results were very different:

Those are some damn good numbers in the context!

So when do we get to see the unbalanced spool valve that opens with the anemic 19th century hammer at 3 kPSI?

(just kidding)
Good job noticing what the problem was. Much better fix than machining a spacer.
Top

I see you have mastered clairvoyance

Seriously I can easily replace the CO2 bottle with a 3000 psi tank and making a balanced valve would not be that much of a challenge...

I'm just worried that if I get started down that road I'll keep on adding bits and before you know it...

I gave the balanced valve a go and was able to raise firing pressure to 1100 psi.

Best velocity recorded was 774 fps for 59.3 ft lbs, around 50% more than the maximum for the conventional valve.

I was a little conservative with the diameter of the balanced portion, I was worried that if it was too close to the seat then it might have problems sealing.

In that regard I've probably erred too much on the side of caution with 7mm, and can afford to go a little higher... 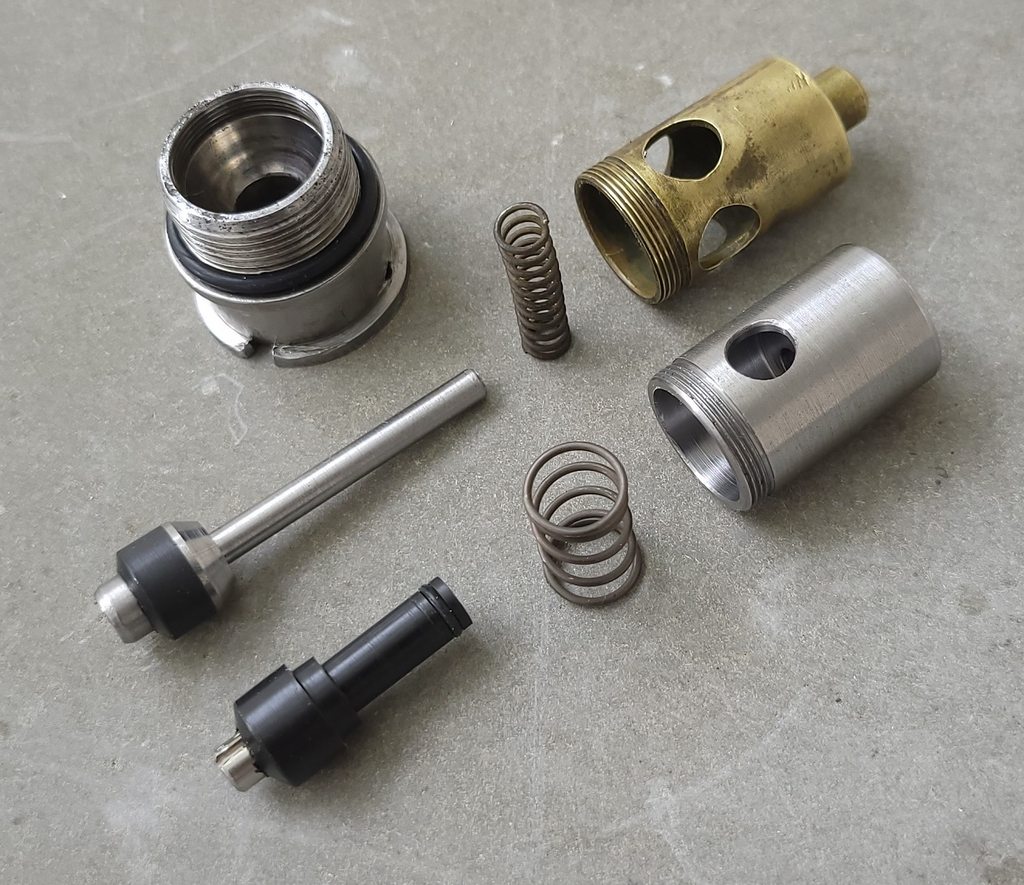 Balanced valve V1 and housing compared to the improved poppet and original housing.

Note the groove at the head of the valve to allow air to vent into the balanced portion.

The head diameter is also reduced to 6mm from 8mm for better flow. 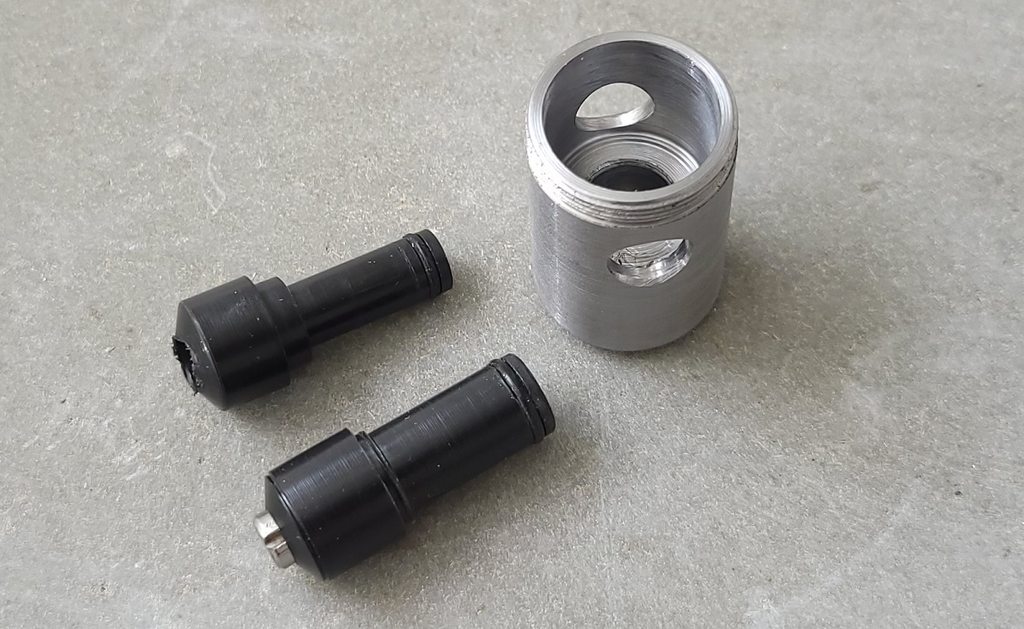 Balanced valve V2 with a larger bore balanced portion to decrease the seating bias and allow operation at even higher pressure.

Diameter is increased from 7mm to 9mm and the housing is bored out accordingly.

The display showed 520 feet per second but I suspect this is erroneous as the lead ball went further into the wooden backstop than previous shots. The muzzle was probably too close to the first sensor on the chrono.

Loaded up a second shot and got an almighty whoosh, and this: 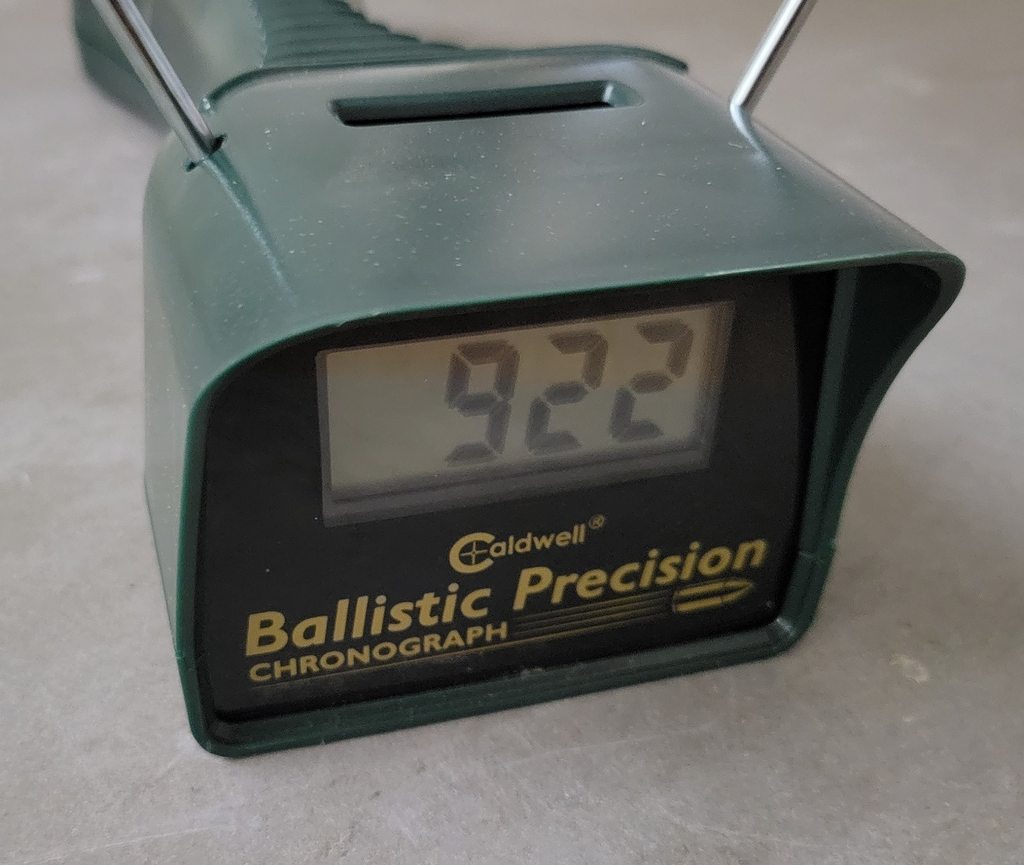 The chamber was completely empty however, and subsequent evaluation revealed the reason: 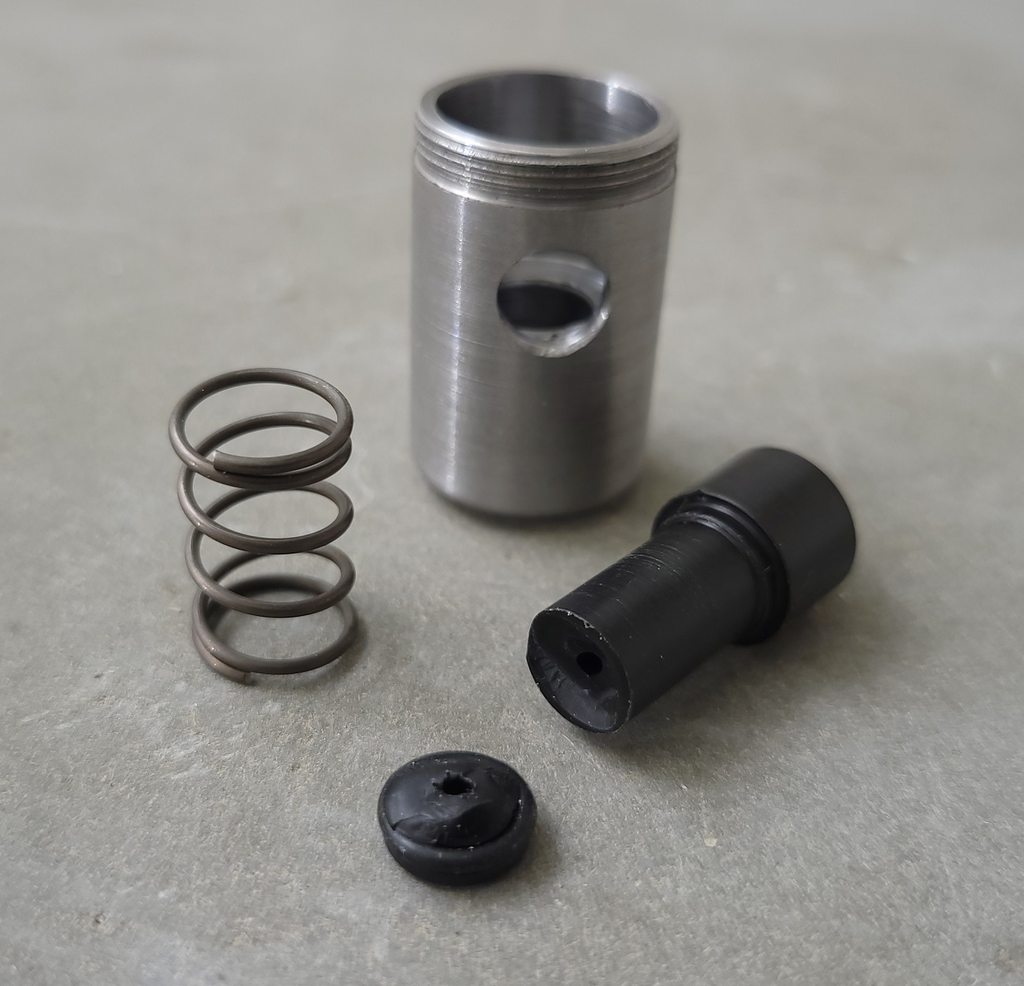 It turns out that allowing the valve to bottom out and a relatively weak valve spring might not be the best ideas at this end of the performance spectrum...

I think a minor redesign will solve the issue, watch this space

Good improvement! More than 900 fps with that lead ball? steel? ... At a short distance, say at 2 meters, you send towards the sky possibly the one who touches you.

You can see the ammunition here, 0.310" diameter lead balls that weigh about 2.9 grams.

The debated but still quite valid rule of thumb for the minimum energy required for a kinetic projectile to reliably produce a potentially lethal wound is 58 ft lbs, about 79 joules. This last shot had an energy of 114 joules, so more than enough to be dangerous. It's more energy than you would expect from a .25 ACP firearm.

I did not know about those numbers but my common sense tells me to be very careful, because that must hit very hard. Maybe too much for me, I don't know ...

It's still a nice job, and the valve and modifications are excellent.