Is this a mini?

Probably to big to qualify, but I thought I would share anyway.

I built this so I would have something to shoot the leftover potato rings when I'm shooting my jumbo spray-n-pray cannon.

I used roughly the same proportions as my big cannon. The barrel is 1/2" dia. and 21" long. The chamber is a PVC tee fitting 2" dia. by 4" long. I used a peizo sparker from a lighter and managed to rig a pistol-style grip and trigger.

It took a while to find a gas syringe, but once I did I quickly figured out the amount of gas to use.

So now when I'm shooting the big cannon, someone else can have fun with this. And less of the taters is wasted. 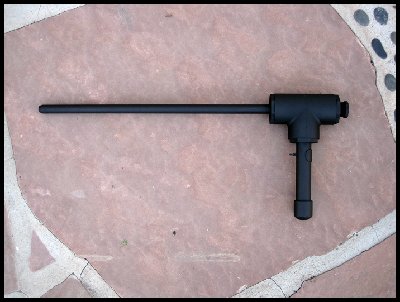 I don't know, "mini" is a pretty loose term, generally spray n' pray guns have a >1" bore, so do advanced combustions, I'd say it's a mini.

It certainly looks like a nice build, what do you mean by "gas syringe", to measure gas I just use a syringe with a piece of brass tubing glued on to fit a butane bottle valve-thing.

I'd assume that since you're using a syringe you're getting good stoichiometry?
Top

well it's actually a syringe used in a doctors office to clean out peoples ears!

But it slides easy and has graduation marks so I know how much gas I'm using. I plug it in to the gas bottle. When I open the valve slowly the bottle pressure will move the plunger back.

I calculated the chamber volume and use about 6% propane - right in the middle of the explosive range.
Top

Ideally, you should use 4.7% propane IIRC. Not a bad little gun. Clean, safe, and no doubt fun. Good work.

Jim Beam wrote:I calculated the chamber volume and use about 6% propane - right in the middle of the explosive range.

Mathematical middle of the explosive range doesn't mean the ideal mix. It'll do, but it's easy to show that's not quite stoichiometric.

For the appropriate mix, you inject 4.2% propane by volume - as calculated by 1 molecule of propane to 5 of oxygen, and 21% oxygen content in air.
Does that thing kinda look like a big cat to you?
Top

Also be sure you know your exact chamber volume, one way to account for fittings and such is to load it, weigh it (in grams), fill it with water and weigh it again, the difference in grams is the volume in ml (at sea level & room temp, not a significant difference anyway, just thought I'd say)
Top

Jim Beam wrote:
For the appropriate mix, you inject 4.2% propane by volume - as calculated by 1 molecule of propane to 5 of oxygen, and 21% oxygen content in air.

A properly stoichiometric mix will burn better and provide greater performance. If you want to both use more propane and lose power as a result, be my guest.

Either way, I'd appreciate less sarcasm.
Does that thing kinda look like a big cat to you?
Top

Ah, arrogance and ignorance, what a lovely combination. Reminds me of a certain member we had here years ago, who went by the name of Affliction.

Anyway, as Rag said, you're wasting more than a tiny molar fraction of propane. Peak pressure occurs very near the stoichiometric oxidizer to fuel ratio. Deviating from this range will significantly drop muzzle energy and velocity, as this graph from Burnt Latke shows:

When you have too little fuel, it is hard to get ignition. When too rich, ignition tends to be low on power. Enjoy this example.
[youtube][/youtube]
My First QDV tested ABS DWV for compressed air - Competition QDV cannnons - The Mouse Musket
Top

Too much fuel is a problem for reasons other than stoichiometry. From a stoichiometric viewpoint 8% propane should be virtually identical to 4%. All you've done is reduced the effective volume (and theoretical energy) of the chamber by 4%. That's probably too small a change to be noticed.

But there are affects other than just stoichiometry. Get up above 6% or so and the combustion rate starts to drop significantly. Latke's data is showing a clear drop off in performance at 5%. At 7% the flame front moves very slowly and the gun'll fart out the ammo when only a few percent of the fuel has been burned.

Stoichiometric Mix:
(The flame front is marked with the red arrows) 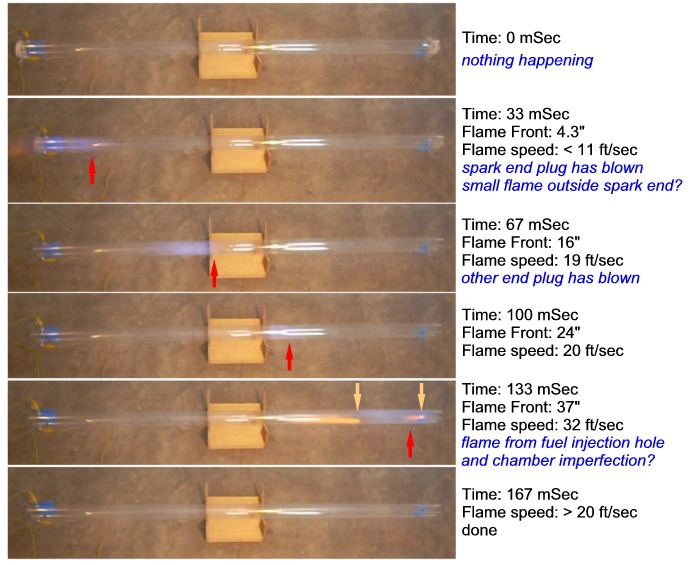 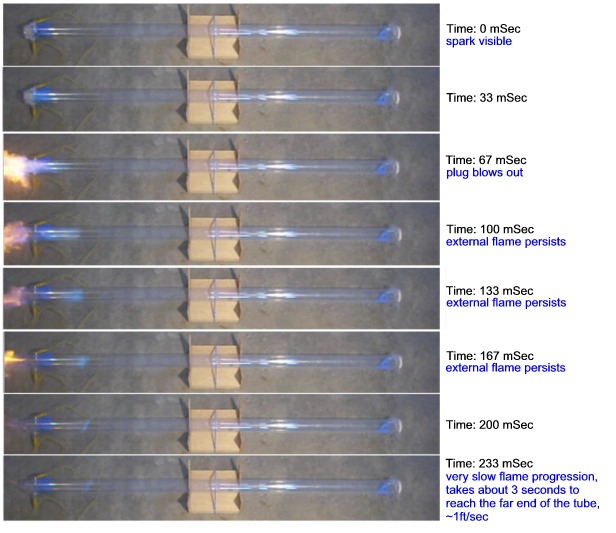 A closed chamber will behave a bit different than the tube. The tube is probably pumping hot gases out of the ignition end (left) which is making the movement of the flame front appear slower than it is. Still, in the bottom frame that is the flame front, the faint slightly tilted blue line almost all the way to the left of the tube. (The tube is ignited about an inch from the left end.) It took the flame about 3 seconds to progress to the far end of the 46 inch long tube.

From Propane comnbustion in air in a semi-open poly8carbonate tube.

I should clarify that the flame front propagation rate is exactly what I was referring to when I brought up the relationship between stoichiometry and peak chamber pressure.

Indeed, any mixture within the explosive range of propane/air will produce roughly the same energy, ignoring the small volume differences, as well as any changes in reaction enthalpy caused by the formation of alternative combustion products. However, as the system is not adiabatic, and the chamber walls have relatively high heat capacity, the rate at which the energy is released becomes very important in determining the peak pressure.

Flame speed is probably the single most important factor in a combustion launcher, especially one which relies on the static friction of the ammo alone to contain the combustion gases prior to initial projectile movement.
People should not be afraid of their governments. Governments should be afraid of their people.
Top
Post Reply
13 posts • Page 1 of 1