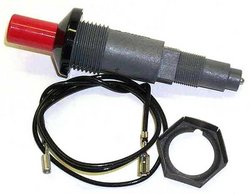 A simple piezoelectric igniter for a grill

A BBQ igniter or grill igniter is arguably the simplest spudgun ignition source. It consists of a pushbutton, that activates a hammer mechanism that strikes a piezoelectric crystal. The crystal generates a high voltage pulse that can be made to jump a small spark gap. One of the main advantages to a BBQ igniter is that it doesn't use batteries, and is cheap and relatively small. Quality differs quite a bit though, some igniters last for many years while other break after some time of use. The spark is also the weakest of the common ignition sources, and achieving ignition may take several attempts in some circumstances (cold weather, sub-optimal fuel mixes, etc).

Piezoelectric igniters can also be obtained from a few other devices, notably long-nosed lighters, and some gas igniters and cigarette lighters.

There are also electric BBQ igniters that run on a 1.5V or 9V battery. They are similar in operation to a Stun gun and are capable of producing much larger sparks than piezoelectric igniters. They are a very good alternative to a Stun Gun if you live in a state/country where such devices are banned by law.