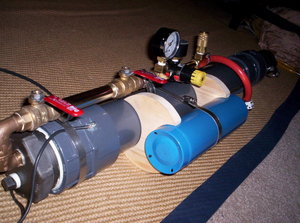 A very well built hybrid, although it is not safe for handheld operation due to its use of a PVC chamber

A hybrid is first injected with a measured amount of fuel - much more than would be used in a regular combustion. However, without adequate oxygen, the mixture would be far too rich to ignite, so the chamber is then with pressurized air. The amount of air depends on how much fuel was added, and is calculated to achieve a stoichiometric fuel/air ratio in the chamber.

A hybrid using twice as much fuel and air as a comparable combustion gun is said to be using a 2X mix. Higher mixtures can be used and will produce even higher pressures. The fuel and air needs to be measured and matched carefully to ensure reliable operation, pressure gauges and fuel meters are used for this.

The ignition of a hybrid gun is more difficult than a normal combustion, as the length of a spark is roughly inversely proportional to the density of the gas. This necessitates the use of high-powered ignition source such as a stungun, flyback circuit, or other high-voltage source; grill igniters may be unreliable and require a very small spark gap(typically 1mm or less) to work correctly in pressurized fuel/air environments.

The gases resulting from the combustion of the fuel/air mixture are released to the barrel via a self-operating valve of some sort, most commonly a burst disk because of it's simplicity and reliability, although self-venting piston/diaphragm valves have been used. The valve is required to contain the pressure of the mixture pre-ignition, in other words, to prevent the pressurized fuel/air mixture from exiting out the barrel before ignition. Upon ignition of the fuel-air mix, the pressure rises and the valve opens.

A hybrid is one of the more dangerous types of launchers to build, apart from high pressure pneumatics. It is advised to only attempt to build one with pipe that can handle the high pressure environment (300+ PSI), generally SCH 40 steel or better. SCH 80 PVC has been used, but is not safe due to recurring fatiguing problems that have been observed in PVC hybrids and multiple failures even at low mixes. As with any launcher, the entire chamber is only rated to the spec of the lowest-rated part, so care must be taken when constructing the chamber of a hybrid. Remote ignition is a must if PVC is used as a construction material, and is strongly advised for the initial testing of any hybrid. Although it was originally thought that mixes higher than 4x posed an unacceptable risk of DDT (deflagration to detonation transition), further calculations have revealed that the increased temperature of higher mixes barely counters the decreased burn rate caused by higher pre-ignition pressures, and that even a 20x mix will only burn a few m/s faster than a 1x mix. If DDT of all or most of the fuel load did occur, it would produce an extremely violent shock and pressure spike, which would cause any PVC chamber to rupture, and damage steel or copper components which were not highly overbuilt. The standard for hybrid construction is currently SCH 40 steel pipe and fittings, which have been tested in 2" sizes at mixes of up to 20x, repeatedly without failure. Theoretical burst pressure of SCH 40 2" steel pipe is >4kpsi (ignoring threaded sections and end effects), and there is no recorded incidence of ruptures occurring in SCH 40 steel hybrid chambers. Copper tube barrels have burst and/or bulged due to what is thought to be localized DDT.